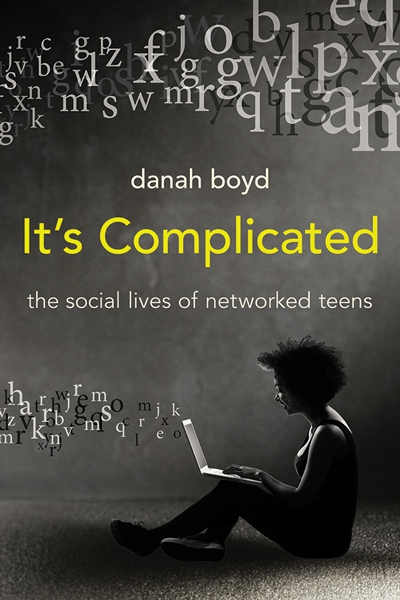 Everyone has heard the stories. The Craigslist Killer. Predators on MySpace. The Star Wars Kid. Amanda Todd. Stories of internet victimization, addiction, disruption. Judging from the bulk of television and newspaper reports, one can only conclude that the internet is a brutal, scary place. Adults can barely manage it, therefore kids should be kept away from it completely and leave everything to their protectors.

Based on journalistic evidence, it seems incontrovertible. It is not. It is fatuous.

danah boyd’s new book, It’s Complicated: The Social Lives of Networked Teens provides an alternative view. Rather than suggesting the typical view of adult journalists everywhere that the big, scary World Wide Web is a cruel net in which to entrap innocents everywhere, Ms. boyd suggests that the same probles adults fear so deeply online were already part of our offline culture.

In eight chapters dealing with topics from bullying to racism to privacy and all points in between, It’s Complicated argues that teens have a very real struggle in the world that refuses to treat them as young adults searching for their identity.

A moral panic takes hold when the public comes to believe that a cultural artifact, practice, or population threatens the social order. Moral panics that surround youth typically center on issues of sexuality, delinquency, and reduced competency. New genres of media–and the content that’s shared through them–often trigger such anxieties.

The problem, of course, is that unlike comic books, the Internet is not burnable. Despite the best efforts of parents like Tommy Jordan shooting their child’s laptops in a display of truly phallic power, the Internet is not going away. This genie does not go back into a bottle.

What ms. boyd uncovers is not that technology adds new social problems (though certainly it does) but more importantly that it aggravates existing social problems. The ignorance of people like Alexandra Wallace, and the racism of people responding to the Black character in the movie adaptation of the Hunger Games are not new. Neither is bullying. Technology makes these things highly visible. It spreads things sometimes more quickly and more broadly. But the issue is not the technology; it is what technology transmits.

Behind all of the fear of technology is an inability to face actual social reality. Adults have always been mortally fearful of teen freedom. But, as ms. boyd notes, adults are now also equally fearful of other adults. She notes when talking with teens about their social lives that many parents she talked to did not allow sleepovers because they were afraid someone’s father or brother would get drunk and molest one of the girls.

Instead giving reasonable guidance, parents simply choose to isolate their teens from any possible social contact that the parents themselves do not control. This contributes not to teen safety but rather to social rot. As ms. boyd writes, “When parents distrust others or the values of families around them, they often respond by trying to isolate their children… Communities aren’t safe when everyone turns inward; they are only safe when people work collectively to help one another and those around them.”

What makes the book particularly compelling however is hearing the teens themselves. Over the past thirty years, lawmakers and parents everywhere have crippled the public mobility of teens, not only by helicopter parenting but by curfew laws and more. Teens are frustrated. Myra’s story is typical:

From learning Czech to track, from orchestra to work in a nursery, [Myra] told me that her mother organized “98%” of her daily routine. Myra did not like all of these activities, but her mother thought they were important. She was resigned to them….

“Usually my mom will have things scheduled for me to do. So I really don’t have much choice in what I’m doing Friday nights. I haven’t had a free weekend in so long. I cannot even remember the last time I got to choose what I wanted to do over the weekend.” Myra noted that her mother meant well, but she was exhausted and felt socially disconnected because she did not have time to connect with friends outside of classes.

Variations on this story repeat throughout the book.

Amy made it very clear that she didn’t prefer hanging out with friends online but felt that technology provided a rare opportunity to connect even when she couldn’t leave the house. When I asked her what she’d rather do, she explained, “Just go anywhere. I don’t care where, just not home. Somewhere with my friends, just out hanging out.” Resigned that this was not feasible, she spent as much time online as possible. As she explained, “My mom doesn’t let me out of the house very often, so that’s pretty much all I do, is I sit on MySpace and talk to people and text and talk on the phone, ‘cause my mom’s always got some crazy reason to keep me in the house.”

In short, after decades of trying to corral teens into routines of school, sports, and “approved activities”; by passing curfew laws, anti-assembly laws, and surveillance laws monitoring them at home and school and everywhere else; by interfering with their lives at every moment possible and refusing to accept that they are trying to grow into a public identity–the same way, in fact, their parents did–adults have ignored the actual needs of teens who are trying to grow up. Teens need social contact with their peers and with whomever else they sensibly choose. It is part of becoming a social being. With all the strictures that well-intentioned but obnoxious parents have imposed on them, for these teens all that remains is social networking.

Rather than demonize the technology that allows them a bit of freedom away from constant oppressive interference, American adults would do much better to try working with them to help solve some of the deeper problems in America itself. That is ultimately ms. boyd’s conclusion. Beyond all the rhetoric about what a “threat” the Internet is to their current social structure, perhaps Americans ought to re-examine that structure itself.