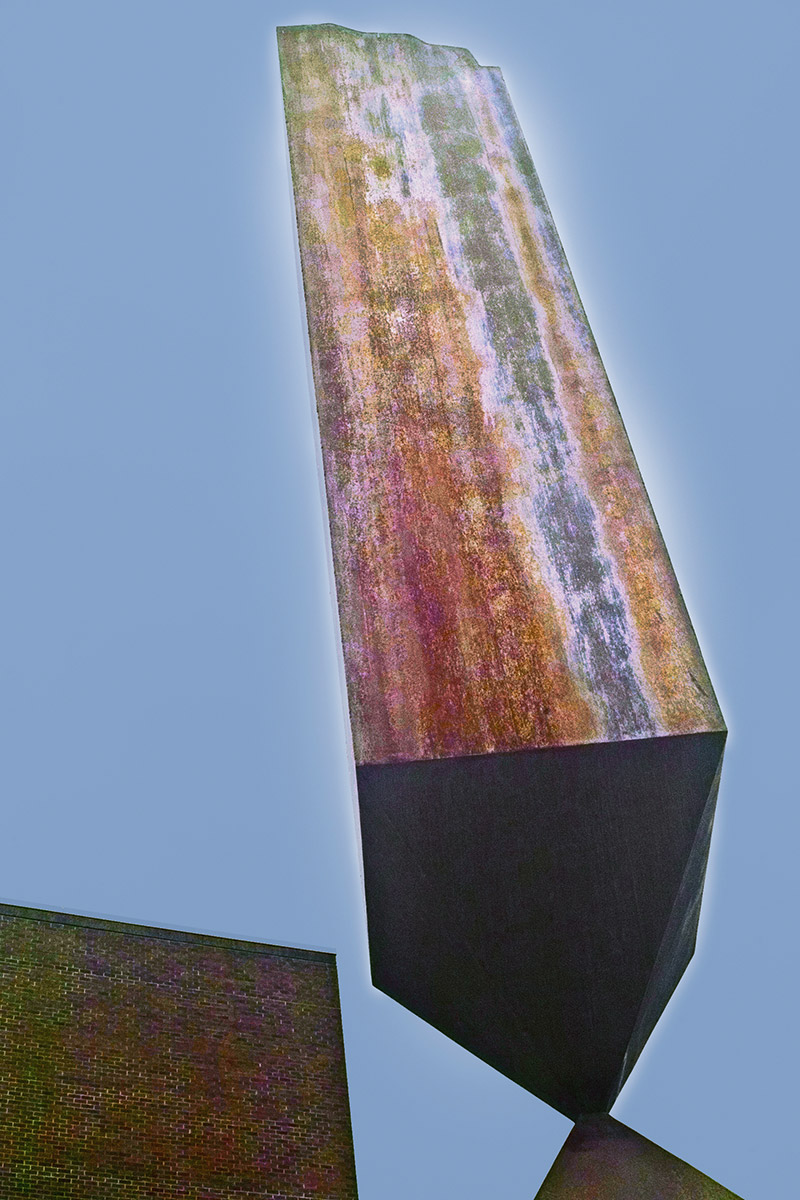 Ms. Wright studied art at Columbia University’s Barnard College and fell in love there with post-WWII art and American abstraction in particular. After moving back to Seattle from New York in 1955 with her husband, she raised four children and ran a small gallery in Pioneer Square, all the while quietly assembling the finest collection by far of modernist art in the Pacific Northwest.

Her father, the timber baron Prentice Bloedel, never understood her passion for that awful scratchy stuff people called modern art. Still, he believed in his daughter and her future, and despite his personal dislike of modern art, he understood how important it was to her. In 1969, he gave Ms. Wright an endowment of $1,000,000 to go out and buy a collection of public artwork that would make the region proud.

And so she did. The very first piece she purchased was Barnett Newman’s extraordinary Broken Obelisk.

Newman’s piece was originally fabricated twice. The first piece sat outside of Mies van der Rohe’s monumental Seagram Building. The other, outside the Corcoran Gallery in Washington, DC. Its presence there caused some consternation. Installed in 1967, it became extremely uneasy for some to view after the 1968 assassination of Martin Luther King, Jr. King’s most famous speech had occured in the shadow of one of the most famous obelisks in history: the Washington Monument. In that context, Newman’s sculpture served as a painful reminder of the broken hopes of the civil rights movement, making many Washingtonians uncomfortable.

Rather than accept the reminder and reality of the art, denizens of DC began to mobilize against it, calling for its removal. Finally in May 1969, Texas art collectors Dominique and John de Menil purchased the sculpture, intending to move it outside of Houston City Hall, as a dedication to Martin Luther King. The move made perfect sense. But the city balked. Instead the de Menils found another site to contain it, one they had built themselves: the Rothko Chapel.

The other copy of the sculpture made its way to Seattle. Originally Virginia Wright had planned an excellent and fitting location. Her husband Bagley Wright has been instrumental in the building of Seattle’s famous Space Needle, so when “the box that the Space Needle came in”–aka the Seafirst Building–was built in 1969, it seemed a logical choice. The building was, after all, a cheap echo of the Seagram Building where Ms. Wright had first seen the Broken Obelisk. Seafirst, however, did not agree. Instead, they chose another work that would become beloved by Seattleites, Henry Moore’s Vertebrae.

The Broken Obelisk instead wound up being a gift to the University of Washington, where it was dedicated in August of 1971. Virginia Wright has also contributed to the nationally famous outdoor sculpture collection of Western Washington University in Bellingham, purchasing the stunning Mark di Suvero sculpture For Handel and the subtle steel sculpture India by Anthony Caro, but she has continued to adore the Barnett Newman piece.

In 1998, Ms. Wright heard from Patterson Sims, the former curator of SAM, that the sculpture had been altered. Ms. Wright took her son out to the campus, stood on his shoulders and measured the piece herself. The word had been true: in their attempt to keep the sculpture from leaning, the University had widened the joint between the inverted obelisk and the pyramid base, but they had no way to restore it to its original dimensions. Ms. Wright tried to raise the funds for the restoration from an independent source. No one else seemed even remotely interested in the problem. So in 2008 she paid $30,000 out of her own pocket to have the work restored to its original look.

After that short hiatus, the obelisk has returned to Red Square and remains quietly there. Scholars around the world agree that it is Newman’s finest and most majestic sculpture. Students–well, they still get to use it for shade on those odd occasions between classes, between libraries. To this day it remains Ms. Wright’s favorite piece, the beginning of a long and storied career as one of the great art patrons of Seattle.