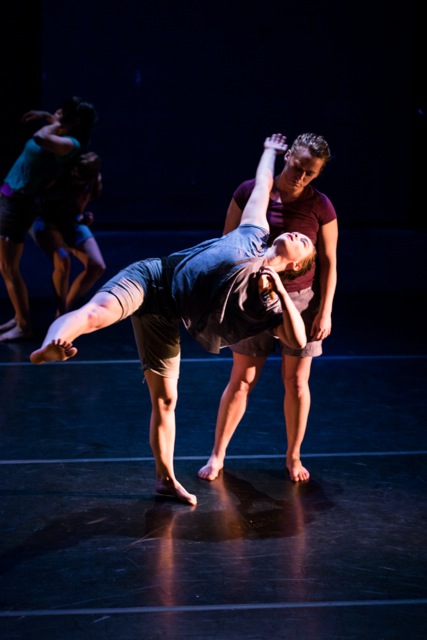 Over the past five years I’ve watched the BOOST Dance Festival grow from a modestly attended, somewhat tentative venture featuring lesser-known choreographers. It is now safely one of the most attractive dance events in Seattle. As its producers Marlo Martin and Kristen Legg have grown into it, they have preserved the essential character of the festival while opening it up each year a little more, first by opening it up to choreographers from outside of Seattle, and now by adding a youth event as part of the festival.

All these changes have been for the best. Ms. Martin has always sought to give newer choreographers a “boost” by producing their work in tandem with more well-known composers. This year is no exception. On the first weekend, younger choreographers Kaitlin McCarthy and Erica Badgeley exhibited their pieces alongside the well-known and well-respected Maya Soto and Michele Miller as well as Ms. Martin and Ms. Legg themselves.

As usual the program was eclectic. Opening the evening was Erica Badgeley’s ethereal piece, Rest-less. I have admired Ms. Badgeley as a dancer for quite some time, dating back to her undergraduate days at the University of Washington, but this was the first choreographic work I had seen from her in quite some time. Its central image is of a dancer (Hallie Scott) rising, falling, twisting within a massively oversized white sheet. It’s a crisp metaphor for being halfway between the realm of sleep and waking, either being consumed by the bed on which humans rest (whatever it be) and/or being coughed up from it. As the dancer plays with the patterns of light (courtesy of the excellent Dave Proscia), the piece acquires another layer of meaning as the figure of Fausto Rivera finally emerges from the linen, and the figure of Ms. Scott disappears within the metaphorical stuff of dreams.

I found it highly effective and quite striking. It shows a great confidence in Ms. Badgeley for the festival’s producers to open their show with this piece by the youngest choreographer on the ticket.

Maya Soto’s piece goes in a different direction. Not listless and ineffable like Ms. Badgeley’s work, GO Stop Falling continues Ms. Soto’s interest in explosive physicalization of internal states. The piece jumps immediately to a frenetic pace–the “GO” portion of the dance–and gradually through the next two sections moves from something that looks like escape to something that looks much more like being trapped. It is dreamlike, too, as is the first piece, but ends there rather than begins there. The constant weaving and shifting groupings of the movement give the piece a feeling of impulse that is at first relentless yet ends in almost frozen shapes as the piece shifts from exploring movement to exploring balance. I have always admired Ms. Soto’s work, and though this piece is a miniature it is no less exciting for that.

After Ms. Soto’s piece, Retrograde 93 comes as a soothing return to classical lines. Taking the term best known from astrology as a literal description of balletic movement, and interchanging between lines of prograde and retrograde motion around a nominal center, Ms. Legg’s choreography is elegant, as it always is, yet surprisingly minimalistic at times, too. Using the music of Bach which is itself built upon retrograde and prograde lines of fugue makes the work even more interesting. The dancers here are all quite lively. I always love watching Karena Birk, and here she makes a good center of the solar system. Laura Kay Young, too is a pleasure.

After the intermission come three quite different pieces: Michele Miller’s I AM the Bully, Papoose by Jenny Peterson and Kaitlin McCarthy, and badmarmarDANCE’s Wake State post-lucid dream..

I enjoyed about two-thirds of I AM the Bully, but the other third seems to me misguided. For a piece that explores violence, it is effective on the visceral level–how could it not be with such a fine cast of dancers?–but I found it socially hollow. Or rather, I find the problem that it reduces social violence to the level of individual psychology.

To me the piece explores the psychological experience of bullying. The way Ms. Miller emphasizes individual movements isolated from the group reinforce this to me. That much is clear and, for me, that much works. What it fails to argue is that bullying is also hierarchical. Throughout the piece I saw acts of individual violence against individuals, with individual effects. This seems much too simple. Bullying has its own politics and politics does not reduce easily to the individual level. I should like to see a stronger argument in the piece that bullying is actually a social (group) violence against individuals, but the groupings of movement on stage do not argue this, nor do their impact.

Papoose is obviously the work of youth. I am inclined therefore to overlook certain of its faults. The one fault I cannot overlook is that its images, while initially striking, share only weak connections to each other. Much of the dance is repetitive, and that is fine. But I should like to have the repetition be more purposeful. Either it should provide a structure that impels forward the images and lines of the dance or it should force the audience into a state wherein one feels the emotion of the repetition. The piece seems to be uncommitted to either direction. There is not enough variation in the repeated movements to provide a musical sort of progression, nor is there enough strictness within the repetition to call upon the audience’s emotional endurance. The dancers themselves are fine, and they move beautifully, but to me the piece lacks decisiveness.

The closer, badmarmarDANCE’s Wake State post-lucid dream continues Marlo Martin’s explorations of guided imagery and text. Her earlier pieces in this style had a veneer of realism to them, with many of the movements coming from environmental interactions (tenSIDES, for example). This piece seems to me much more based upon physicalizing images from the subconscious. It also seems to me to be a piece out of a larger work, because I get no sense in the piece that it truly finishes. Rather, it simply ends. It is no less lovely for that; it simply means I wish there were more.

I truly enjoyed the subtly competitive duets within the larger piece, and the dancers on stage are certainly among my very favorite in Seattle: Karen O’Branovich, Nadia Losonsky, and Alex Goldstein are always enjoyable to watch, along with the fiery Michele O’Neill and the seemingly tireless Danica Bito. An especially nice treat was seeing Ms. Martin herself dance with her company.

Part of the eclectic approach of BOOST in its two weekends is that it brings youth and experience together. This relationship over the past five years of the festival seems to have been beneficial for both. The youth have gained in their wisdom, so to speak, and the experienced have brushed against the fire of youth; both have improved in the deal. I hope to see much more of this interaction in the community. Serving the dance community is, after all, the real purpose of BOOST. Its producers have done well at that, and I look forward to even more service this upcoming weekend and beyond.