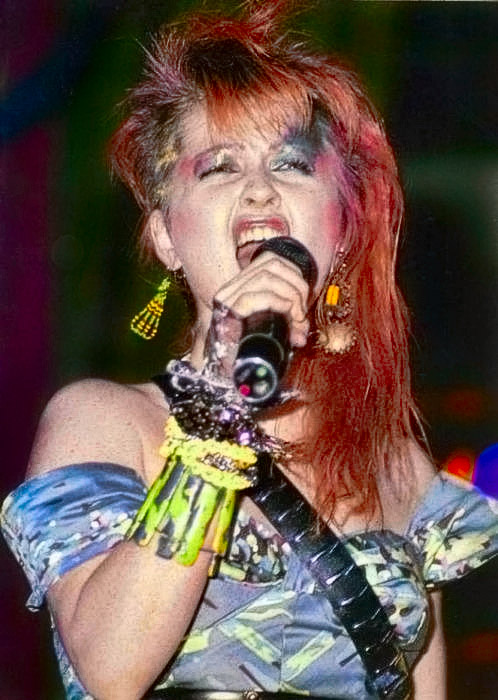 “Lauper’s first band had broken up, she had filed for bankruptcy, and she was singing in a Japanese restaurant. Then this debut album of razor-sharp dance pop became the first by a female performer to score four Top Five hits, including ‘Girls Just Want to Have Fun’ and ‘Time After Time.'”

And that’s a reasonable place to start this story. Two sentences, scribe anonymous, encapsulating the first solo album by a native of Ozone Park, Queens, New York City, who’d in addition to the above had already been told she would never sing again. Two sentences, plus the striking album cover, establishing the albums’ place in the canon of Rolling Stone magazine at exactly #494 of the “500 Greatest Albums Of All Time,” one position above Husker Du’s New Day Rising, one below Earth, Wind and Fire’s That’s The Way Of The World. The #1 album–I’ll save you some time: Sgt. Pepper’s Lonely Hearts Club Band. That’s Rolling Stone for you. Come to think of it, that’s “canon” for you.

But that’s another story.

As Jerry Lewis in The Big Mouth, confronted with a treasure map that doesn’t start anywhere, decides to start right under his feet, so we too might as well start simply, because the rest of this story, while revelatory, revolutionary, and spiritual, not to mention the heart-lightening we often dismiss as “fun,” will not be simple. I promise not to drag you down heavy, or go “lead,” as Cyndi cracked, describing the sales of her first album, Blue Angel by Blue Angel, the “first band” mentioned above.

But as Bill Cosby warned his viewers in a cartoon show on the air about the same time as the album’s 1983 release, “if you’re not careful you might learn something before it’s done.”

Bill Cosby or Jerry Lewis may not seem to have much to do with Cyndi Lauper or Blue Angel or Japanese restaurants. But Cyndi’s brilliance lies for a start, in synthesis. Not laboratory synthesis, not the calculated hit-formatting of the likes of her alleged rival Madonna (who actually does something much more different, much less direct, but more on Madonna anon). Thrift Shop Synthesis. As in a thrift shop, our past lies frayed-hem-to-broken-corner, down all the decades. The bright and the faded tie each other in knots. Yesterday’s high-tech lies worn, torn, bent, hissing, short-circuited.

Still, beauty can be found. And more to Cyndi Lauper’s point, beauty can be created, inspired by this chaotic juxtaposition, and deriving from it, but more consciously directed and self-consciously wild. Look at her swirling, or perhaps Twist-ing, across her album cover, changing textures from four times from scalp to shoulders, shoulders to waist, waist to knees, knees to feet.

Her brilliance lies in absorption, and transmutation: Cyndi as the Patchwork Girl of Oz, improbable parts gathered into a triumphant whole (both song-by-song and the album start-to-finish), scooping up and tossing around lyrics, melodies, attitudes, and emotions like a beach-cleaning machine hovering up raw material and spitting out confidently intense sandpainted portraits.

It lies in interpretation. Cyndi took flak for not writing some of her biggest hits, but this dismisses the (underrated) power of interpretation (usually typed as a jazz trope) in pop. Altering lyrics, points of view, subject-object relations, and emotional climates, she took a desperate Atlanta man’s lament that cash ruled everything around him—including love—and added a shocking layer of triumph and self-satisfaction. She pretzeled a dour Philadelphian’s dismissal of womenfolk as flighty, into a feminist anthem/call to world partying. A diminutive Minneapolis fella’s dirty-laundry love story lost its adolescent sheen in her pipes, gaining gravitas and a neatly-elided (one gender noun dropped) bisexual edge.

It lies in her Individualism—you get to wear whatever you pick out. It lies, too, in her validation of individuals assembling. Bring your friends, cause peaceful, creative riots. All races, all persuasions welcome, just play nice and don’t act like a jackass. She isn’t as prominent a gay icon as Madonna, or indeed Cher. But unlike them she’s never hoisted herself (except ironically) onto a pedestal.

It lies in her reconfigurations. Just as some couldn’t accept her lack of songwriting credits, some of the same can’t accept her reworkings of “classic” material. They don’t (can’t) hear her extended narrative, the “same” song as successive chapters in a novel.  “Money Changes Everything,” seems simple on the surface, a slogan, a gold-digger’s triumph that predated its own answer song, Cee Lo Green’s even blunter “Fuck You,” by two decades. From the Brains’ twin takes, though, to Cyndi’s studio and live takes, to her acoustic re-imagining, the same lyrics assume multitudes. What made one kind of easy sense in Reagan’s ’80s then spread, became scarier. And told us how scary it was to begin with.

“Money,” conceptually, can seem monolithic, a demand made on most Western individuals, imposing a leaden bloc for the most of us who don’t make enough of it to never have to worry about it. But Cyndi wants to talk about how it interlaces with our living, creating expectations and then waving them just out of reach, Tantalus’ grapes.  She wants to talk about how life is messy and blame isn’t a monolithic donkey to pin on. “We think we know what we’re doin’/That don’t mean a thing…”

Her “Time After Time”—a song that embodies its own title (practically singing itself) established itself firmly as a “modern classic” or “contemporary standard.” Its deceptively simple lyric and melody, as picked up by at least 120 artists, ranging from Eva Cassidy to Willie Nelson to Cassandra Wilson (who learned the tune from Miles Davis’ controversial instrumental version), demonstrates both its underlying strength and the dazzling adaptability of its cover artists. (Not to mention Cyndi’s money, which changes every time one of those versions gets store-bought, [legally] downloaded, or radio-played.)

Of course, Cyndi eventually re-recorded the song as a duet with Sarah McLachlan on her “The Body Acoustic,” album—that record which also enclosed reworkings of her earlier hits. Having taken criticism for not writing some of her hits in the first place, she then took flak for re-interpreting them—running afoul once again of expectations for a rock/pop performer, which, for a jazz performer, would most likely be relaxed.

Thus you could make a case for Cyndi as a jazz singer in pop/rock (thrift store of course) drag. More realistically, though, she’s an artist who never cared for boundaries—even at the expense of her own commercial viability. (Again, compare Ms. Ciccone.)

By the album’s end, amusingly (though maybe not by design), the songs rush through lyrics and riffs (in at least two senses of that word) lifted from better-known songs, much as the Marx Brothers in Go West (inspired themselves by Buster Keaton in The General) chopped up boxcars on their own train to keep their own engine stuffed with firewood.

The out-of-breath “Witness” bears a resemblance through the chorus to Bob Marley’s “Waiting In Vain.” “I’ll Kiss You” (co-written by Cyndi and Shear) brings back the gypsy from the Coasters’ “Love Potion #9,” and the “tweedlee dee…and tweedlee dum” from the Temptations’ “Get Ready” (notice also how the self-pleasuring of “She Bop,” discussed below, turns outward, frantically—this is Love Potion #9, after all—to the outside world). And “Yeah Yeah,” equally delirious, borrows the gospel building blocks (by way of Phil Spector) of “mountain high” and “river deep.” It’s preceded by a snippet of “He’s So Unusual,” a 1920’s song from Betty Boop inspiration Helen Kane.

The woman who’d been told she would never sing again (by three doctors), took home a Grammy for Best New Artist. She sold nine million copies (and rising) worldwide. She became the first female singer to plant four top-five singles from the same album on Billboard’s Hot Hundred chart.

She also sang on “We Are The World,” missed Live Aid because of feminine problems, consorted with wrestlers, drag queens, and that guy in the tux who looks suspiciously like Talking Heads’ Chris Frantz in the “Girls Just Want To Have Fun” video. She covered John Lennon and Marvin Gaye, dug into a duet with Tony Bennett. She cut an electro-dance album, a Great American Songbook album, a rudimentals-acoustic album, and a blues album, although not necessarily in that order. The petals of her debut, unfolding.

Everyone, or at least “everyone” says, not as good. Not as good as “She’s So Unusual.” And I’m sure she finds that frustrating. But she was once told she would never sing again. That was roughly age 25, roughly 25 years ago. Before she got her voice back and conquered the world. Mostly on her own terms.

She had help of course: from the songwriters, from several members of a Philadelphia band called the Hooters, with a rising star (even if Bob Geldof never heard of them before Live Aid) and an odd, insistent Christian streak almost matched by their populist, left-leaning screed. Her history is caught up in the history of MTV, the history of ’80s fashion and ’80s video aesthetics (she starts the “Time After Time” video with a lip synch–not to the song–and ends it with American Sign Language). She became an icon, to the extent that one can iconize a whirling costume-changer. Madonna changes shapes. But Cyndi stays the same under her clothes. Iconization captures one of her whirls, but one only.

She can and should be measured against politics, history, the shifting strata of the power game, against fashion, retro-fashion, video games, films (she’s tried singing for them and acting in them), Wall Street, pizza, “the” Royal Wedding, pizza, cheeseburgers, Diet Coke, New Coke, new old Coke, Jolt Cola, and Bonkers.

But how she started the whole mess should not be forgotten. The 2000 CD reissue kindly hands us three live tracks from Irvine Meadows, 1984. On the last notes of “All Through The Night” she floats up through her range to the top, over the top, into the air, over the moon. The audience isn’t quite sure whether to clap.

I’d think seriously about trading all that history for those few seconds.

So, buy your rollercoaster ticket and step right up into glad rags…