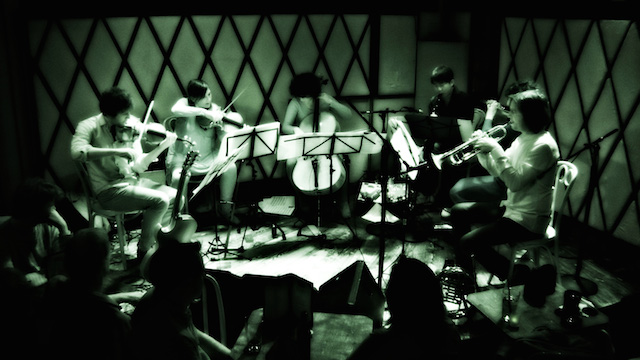 By tradition classical music has been the market of the composer. Orchestras and conductors have some fame, too, but rarely do they draw people in masses for purely musical reasons. In popular music it is the other way around: musicians are the sole reason why people listen, not the songwriters. As Mick Jagger famously quipped, “It’s the singer, not the song.”

yMusic operate in a sort of netherworld between the two. They play classical music, but the composers whom they play are little known and therefore do not have a big draw on their own. But the group, too, is not well-known. They are not like Apocalyptica or Bond or Blake. Having individually become the go-to musicians for rock bands to hire whenever they want a bit of post-rocky-classical sound, their collective C.V. is long, including gigs with Björk, The National, Peter Gabriel, and Richard Reed Parry of Arcade Fire. As a group standing on their own legs, however, their reputation is somewhat more minor.

So it is no surprise to attend yMusic’s concert last Sunday with a sparse crowd. Depressing, but not surprising.

On the hopeful side, it was largely a young crowd. I talked with several people who had come all the way from Spokane and Portland. That takes some devotion. The musicians, I think, rewarded that devotion. The sextet’s music was as smooth as it is on record for the most part, and they were in much better form than when I heard them in San Diego.

Throughout the evening, the group balanced their interest in more purely classical pieces with pieces that occupy some space in between classical composition and modern songwriting. Or, to sound more like Spin magazine, the trippy alternates with the simple, man. I truly enjoyed Andrew Norman’s beautiful composition, Music in Circles and Mark Danciger’s Everness. Both pieces are excellent showcases for the group’s marvelous sense of breath and space. In a lighter vein was Gabriel Kahane’s Without A Frame, but just as enjoyable with its interplay between Rob Moose’s guitar and C.J. Camerieri’s trumpet. Mr. Moose’s arrangement of two Sufjan Stevens “years”–Year of the Dragon and Year of the Horse made the influence explicit, if any member of the audience had doubted it. The delicate and rhythmic composition by Judd Greenstein, Clearing, Dawn, Dance also pleased the crowd.

It was a very fine show, and one that deserved far more attention that it received. At intermission I started wondering why I hear so little about yMusic not just in the local press but in the classical press in general. And that led me to think about an obvious analogy for their work: that of the Kronos Quartet.

Had the Kronos only done only anthology albums, featuring multiple works by different composers, like their eponymous 1986 album or Winter Was Hard, I suspect they’d never have become the phenomenon they did. Much of their fame comes from their alliance with individual composers that other “classical” groups wouldn’t touch either because they were too “avant garde” or simply not considered worthy of classical music: Terry Riley, Bill Evans, Osvaldo Golijov, Steve Reich, Astor Piazzolla, Kevin Volans.

yMusic has not yet found that alliance–at least not on record. I should like to see them find songwriters and composers for whom their clear and catholic style would be an even match, composers who will champion their style, and whose work they would champion in return. Early Kronos recordings, after all, were directly written for them by composers. I think yMusic would serve themselves and contemporary composers more readily to consider something similar, at least once in awhile.

Kronos’s founder David Harrington once said that he wanted the quartet “to be vital, and energetic, and alive, and cool, and not afraid to kick ass and be absolutely beautiful and ugly if it has to be.” The musicians of yMusic clearly feel the same way. Watching them find a path toward their bright future as one of the premier classical chamber groups promises to be just as interesting as the early days of the the Kronos.