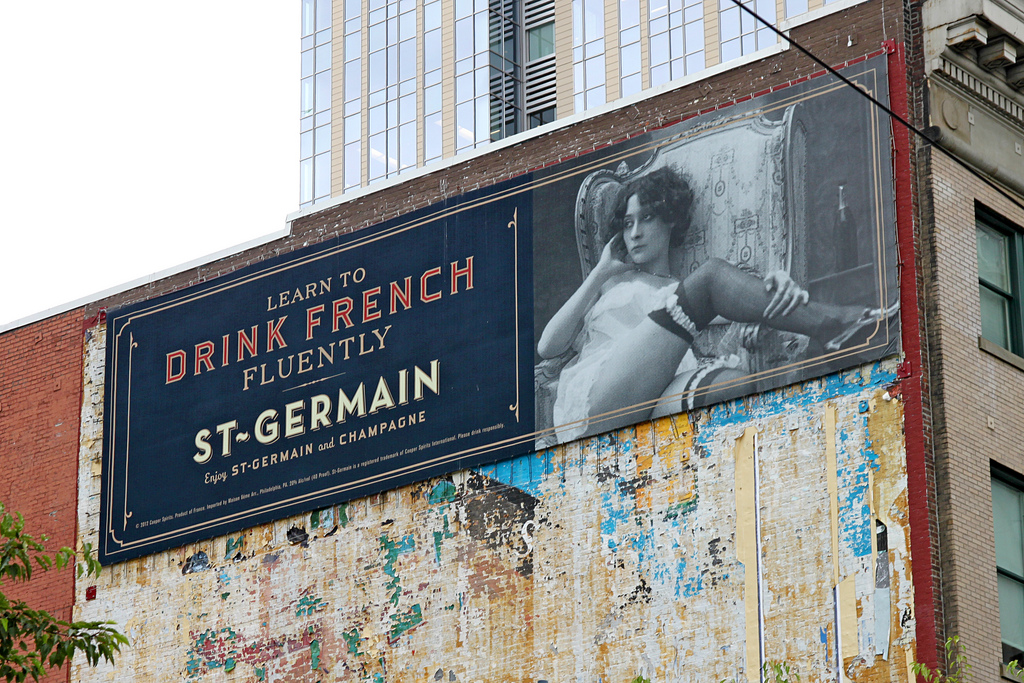 I was driving on Highway 35 on my way home from work. Up in front of me was a giant billboard advertising yet another jeweler, in ten-foot letters and bright silver watches like massive alien machines. The traffic slowed and stopped on the ramp as it bottlenecked further into the city, and my head turned to examine the sign and the blocked view of the cityscape and land beyond. Past it was another billboard, with the name of a casino as its only text, filled with collaged images of money, plush rooms, and dancers. A quarter mile further brought me to an advertisement for business management solutions. Another few hundred yards and I was urged to try the new sandwich at the new sandwich place. The sun set and the signs stayed bright as automatic light switched on.

The city grew dark and the hills beyond feebled out, existing only in our minds and finally not even there. All that remained were the well-lit and shiny reminders that lawyers were standing by to take my case to court, and that somebody’s air conditioners would outlast somebody else’s.

I had an idea.

I made the call the next day. It would put me back a good half grand, but it would be worth it. There would be no design meeting; I sent them the image and it was printed. A few weeks later it went up.

Now on my commute, when I paused in the crush of metal bodies, I looked up and saw mountains by Maxfield Parrish, reaching up to the clouds in impossible cragginess, rivulets and gushing streams painted down their sides, with the sun striking vibrant oranges and reds into the shadows of the rocks. There were trees in copper-patina green and still pools quieter than the middle of winter but warm as the first day of summer.

No doubt people thought it was the first part of a two-stage advertising gimmick, or a filler to be used when no one was renting space on the sign. But I was happy.

The other signs were next. One by one, I placed the calls and sent the pictures to offices and printing shops. Van Gogh’s epic wheat field, with the brooding sky and blazing earth, was pasted over the turnpike, and commuters looked up in astonishment at the approaching crows, bigger than life and settling to rest before them. Several other signs received his fields of poppies, the lilacs at Auvers and the mulberry trees, the olive groves and irises. I didn’t stop there. Cezanne adorned the 5th street exit, with a breathtaking view of Mont Sainte-Victoire, the landscape spilling away beneath us in brash yellows and greens, in beautiful smears and daubs of colour. Homer covered the signs along the east end in huge washes of cliffs and trees standing alone against the cold, of rivers and autumnal foliage, and tropical palms ripe with fruit, and the placid blue of open ocean, and with jungles teeming with rampant life. A giant sky opened over the turnoff for Highway 675, fields and twisted oaks miniscule under titanic clouds and birds so far away they seemed to brush the limit of the sky, and van Ruisdael was before ten thousand people daily.

I went further. I had to move out into the manufacturing district, the nightlife zone, the suburbs. Renoir’s peaceful meadow stilled the riot of the interstate. Manet’s own garden graced the air above a textile mill. Sisley bestowed the fields of Veneux-Nadon on a crack house and the on-ramp that over-arched it. The pretentious McMansions, not so rich yet that they could escape an ad for toothpaste peeking over their back lawns, woke one morning to instead see a country lane by Gauguin warmed by soft sunlight. A daycare went about its business to the backdrop of Eragny in spring, courtesy Pissarro–and I was done.

I was done. My money was gone, the checks were already bouncing, and I did not know what I would do next. But I was happy. The city was covered in colour, colour rampant and exploding, with valleys and waterfalls where none had been, with open sky and trees, and flowers–flowers everywhere. The people walked and drove to the accompaniment of all nature. The night the last billboard went up, I climbed the broadcasting tower, the skyscraper that stands in the middle of the city and commands a view of it all. I looked out, and saw the hills beyond. My billboards were pale dots, blotches of light here and there on the ground. Beyond lay the glittering nebula of humanity, in their homes and workplaces, streetlamps and headlamps and window panes and office space swirling before my eyes. I saw them for what they were. Their own efforts told me what was being lived. The lights in neighboring towers flicked on and off like so many stars twinkling, accompanied by the blinking red bulbs fastened along the length of the radio towers on the horizon. Under it all the ground undulated slowly, gaining momentum as the houses thinned, until there were no houses left and the earth rose up in a chain of hills, meeting the infinite sky.