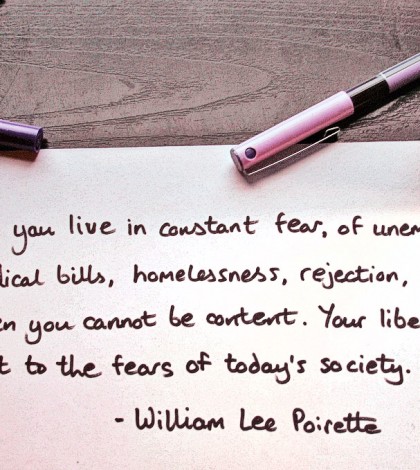 You’ve heard from James Watkins before on the loathsome, fearmongering substitute for journalism that was KIRO’s report on “the most dangerous block in Seattle.” Mr. Watkins, a worker at the Downtown Emergency Services Center, shared his feelings on Henry Rosoff’s “report” in the Seattle Star back in November.

Here he addresses not private enterprises but city government–in particular, its executive branch and their decision to implement a minimum wage compromise with city workers. His words speak eloquently, and we are honored to share them with you here at the Seattle Star.

To the Seattle City Council,

My sincerest thanks on the opportunity to briefly meet with you this afternoon. It was a pleasure to see you and your colleagues working hard on my and my coworkers’ behalf. I didn’t have time to complete my thoughts during the Lunch-and-Learn today, but I appreciate your time, your consideration, and I’d like to finish sharing with you my serious concerns about the current proposal for the minimum wage increase.

As a residential counselor for the Downtown Emergency Service Center, I work in a project that houses Seattle citizens who would otherwise be on the streets, in jail, or in Seattle’s emergency rooms. Over 90% of our operational budget comes from government funding, so like police officers, firefighters, and just like you on city council, I see myself as a civil servant, engaged by the city of Seattle in a civic duty that I take very seriously.

My job duties include performing medication monitoring; de-escalating violent conflicts; and offering emotional support to clients when they are suffering from traumatic loss, life threatening illness, delusions, and despair. I am responsible for emergency evacuations, cleaning up infectious waste, trying to keep economic and sexual predators out of our building, enduring threats, physical, and verbal abuse; and performing CPR when one of our residents overdoses. All this, while doing my best to keep an attitude of hope in a workplace on the edge of crisis in what KIRO news described as the “most dangerous block in Seattle.”

Many evenings I attend to the emergent needs of sixty very needy clients by myself, but wages for my job start at less than $12 per hour. After five years my wage will max-out at $13.44 per hour. My job description requires one year of human service experience, and the preference is for a candidate with a Bachelor’s degree in social sciences. I have been told directly by upper management that without a college degree, I won’t be able to accomplish much more than this in the field of social services.

Nonprofit organizations are not inherently noble, even if their mission is. Income inequality is not only a problem at for-profit businesses. DESC is unionized, under SEIU 1199NW, and this was the best compensation package that organization could negotiate with the management at DESC. The management of our organization are well compensated and they have a powerful financial incentive, just like any corporate CEO, to drive a hard bargain when it comes to compensating employees.

Our compensation certainly shows no sign of improving on its own. Just a few weeks ago the Director of DESC attended our project’s team meeting, and earnestly offered us an impossible choice: “We would like to increase your compensation. Would you prefer to double your case loads? Or dramatically cut your health benefits?”

I am told that our health care plan is worth around $4 per hour. My co-workers and I are at high medical risk. We work closely with clients who have poor hygiene, and infectious diseases including: staph, MRSA, C-diff, hepatitis, and HIV in addition to common colds, flus, and viruses. There is the constant threat of a needlestick from a carelessly discarded, exposed, and contaminated syringe. Almost all of my co-workers need counseling, medication, and/or physical therapy to cope with the strenuous and stressful nature of our job. Adequate health coverage, far from being a perk is an absolute necessity to manage the serious risks that our jobs entail.

Because of the high cost of our health care, the current proposal will not affect my wages. As far as I can understand the proposal, because of the concessions including extended phase in, and the inclusion of health benefits in the total compensation calculation, my wages will not change under this plan at all for 6 years. Unless there are significant cuts in my health benefits or renegotiation of our union contract, I will continue to receive my scheduled scale increase, peaking in 2017 at 13.44. and my wages will not change again until 2023 when the minimum wage reaches $17 per hour.

I am reaching out to you because you, the city, help pay my wage. You do so because offering housing to the homeless saves the taxpayers money. A 2009 study shows that just ONE of our ten housing projects saved “nearly $2,500 per MONTH per resident” and that is after including the cost of the project and employees itself. That project alone saved taxpayers a total of more than $4 million dollars over the first year of operations, yet DESC has 171 mostly full time, adult employees, just like me, making less than $15 per hour. DESC has stated that raising wages of those staff to $15 per hour plus benefits will cost 1.1 million dollars. That is only around a 10 percent increase in our organization’s labor costs, and only a fourth of the money that just one project saved the taxpayers in one year.

I am married, and my wife also works at DESC, as does our roommate. We are all deeply committed to the value of the work that we do, and take very real risks and make real sacrifices to do our jobs. We share a rented house in the Central District, we travel by bike or bus, and forego seeming “essentials” like cell-phones, cable television, and any vacations we might take have to be purchased on credit. To us an increase of $3 per hour is significant, nearly a 25% raise.

It would almost cover the accumulating costs of my college education and allow me to continue professional development, instead of reaching the cap on my earning potential in a few years. For my coworkers, it will cover the cost of child-care, growing medical bills, and provide a sense of security that we just don’t have. I don’t need to list the reasons we need a livable wage, the city has already agreed to that. I believe that the city is responding to the call from constituents demanding that we collectively address the injustice of income inequality, advocating for policy that prevents exploiting the vulnerable and undervalued.

Unfortunately, in my opinion, accepting the proposed plan is worse than waiting. For the first time that I can remember, there is a public spotlight being shined onto the deep economic injustice in our society. There is real public pressure building to address income inequality. We must not squander that opportunity on a plan that doesn’t address the underlying issues, and instead offers workers the promise of modest future rewards for patience and compromise.

Rushing forward to pass a measure that ultimately offers big business a seven year deferral on meeting public pressure for a $15 hourly minimum wage provides the city and its corporate interests a satisfying headline, and a hollow claim of success. I have been thanked and commended on my “important” and “noble” efforts enough. I have heard too many times that I am not being paid enough, but that’s just the way it is. The community is demanding a change, a real change, not another promise that maybe things will change in a few years.

Accepting the proposed policy will not mean any real change for me. I believe my coworkers and I should be paid a livable wage NOW and I believe my community is demanding the same. If the city acquiesces to large nonprofits and businesses by passing a gradual increase in the minimum wage calculated with complex loopholes, waivers, and delays, the community may be fooled into believing that economic inequality has been meaningfully addressed while my coworker’s material conditions have not changed. This will destroy the momentum that we have built over the last decade, and reinforce the economic hopelessness of minimum wage earners.

If on the other hand, the city either mandates a real change, or allows the community to demand it through a vote, then it will mean serious changes must occur in not-for-profit organizational structures, and granting bodies and governments may be forced to change their policies and contracts to prevent a lapse in services. Then we are accomplishing a meaningful change.

Meaningful change isn’t easy. It may be difficult but it is worthwhile. I ask my clients daily to make hard decisions, and to give up on easy solutions and quick fixes. I ask them to really deal with the issues that are challenging them instead of ignoring or projecting blame elsewhere. I ask them to really consider their heart and their true human desire. Have they yet had enough of their suffering? Do they want to continue in the same cycle? Year after year? Or are they really ready to try something different?

The work I do with clients seems meaningful to me. Studies have indicated that it is both effective and economical. We aren’t a vanity nonprofit, promoting a personal, political, or religious agenda. DESC are performing tasks that the city has a responsibility to perform, on behalf of its most vulnerable citizens. If the city agrees, then it has the same responsibility to compensate its employees as any for-profit organization. But if the city doesn’t value the work I do, who am I to disagree? I, and others like me will go elsewhere.

Thanks again for your service and sincerity. I do not speak for DESC. If I can answer any questions, clarify my perspective or help out in any way with your difficult decisions, please feel free to contact me.