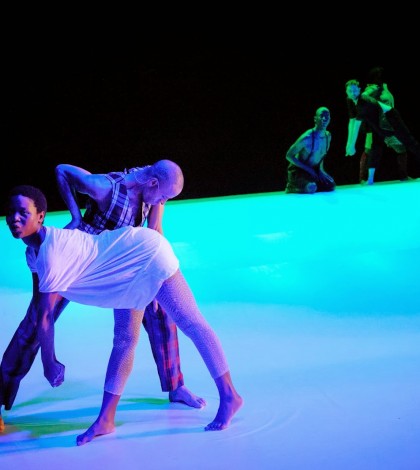 We’d like to begin this week’s entry by mourning the death of Seattle Repertory’s Artistic Director, Jerry Manning, who passed away last Thursday.

At a time when the big houses needed to recover from their condescending, haughty and unfriendly artistic directors, Jerry Manning was a restorative presence.

He simply set about doing the things his predecessors and contemporaries didn’t feel like taking the time to do. He shook hands, he attended Fringe shows, he participated in 14/48, he remembered names, he even showed up regularly to On the Boards. We may not have always agreed with him on sundry topics and issues, but we have nothing but respect for the man himself.

Our condolences to his friends, family and colleagues at the Rep.–ed.

The Pocket Theater returns to the Seattle Creative Arts Center in Ballard with a couple of entries from the Solo Performance part of their mission:Halfrican and God Box. Halfrican, written and performed by local actor Matthew Stuart Jackson, concerns a young man, born in America to South African parents, and his life after a return to his parents’ motherland. God Box, a touring solo show from NYC, is a comedic look at interfaith issues in which a mother discovers that her recently deceased daughter chose not to follow in the family’s faith and her journey to give her progeny a proper burial.

Meanwhile, on Saturday, after a showing of Halfrican, Pocket Theater goes back to their comedic specialties, with a showing of Iron Sketch, the comedy-in-a-pressure-cooker showcase, and WhizARTbang! their monthly works-in-progress cabaret.

Truth be told, we are once again drawn to the programming at On the Boards, who this weekend bring us Alain Buffard’s combination of Kurt Weill songs with the spiritual invigoration of Haitian Vodou in Baron Samedi. This seems like an odd combination, until one remembers that the baron is the Haitian known for his chaotic, debauched nature, adjectives that could also describe Weill’s satirical songcraft. Combine this with the late Buffard’s reputation for sarcastic humor and desire to provoke, the coming weekend provides Seattle the rare opportunity to watch the artist’s little seen work outside of his native France.

Across town, the work from five local choreographers are featured in Full Tilt 2014 at the Velocity Dance Center. We here at This Week do like to pound the drum loudly on behalf of the local dance scene, and the reason is simple: Of the numerous Art scenes to be found in Seattle, while most are unsung, Dance is the one least celebrated outside of its own circles. That any particular scene is ignored in town is bad enough, but it’s particularly egregious when what’s happening in town continues to challenge not just the audience, but the artists themselves. Full Tilt exists simply to give local choreographers an opportunity to innovate and create, and that needs to be rewarded with patronage. This year’s roster consists of Alyza DelPan-Monley, Bryon Carr, Ilona Roth, Jerene Aldinger, and Noelle Chun.

This Saturday at the Vera Project, KEXP’s Audioasis will host a benefit performance for the Freedom Education Project Puget Sound, which allows women to gain a college degree while in prison. The night will feature sets from The Female Fiends, Fauna Shade with Cumulus headlining the event — a bit of indie rock for the kids.

Finally, the week ahead wraps up with the arrival of a new theater festival coming to our town. The One Minute Play Festival, which comes to Seattle after receiving successful runs in numerous other cities, essentially gathers the work from 40 of Seattle’s better known playwrights, teams those plays with local directors who are sent off to find casts and then present those works this coming weekend at ACT. With 80 plays over two hours, the festival promises to be a kaleidoscopic view of the numerous foibles and travails that populate our fair city.

Seattle Public Theater takes on Tom Stoppard’s Arcadia, Arouet adapts a pair of classics with Don Juan in Chicago, the return of the improv stylings of KRAM and Interrobang?!, and the Redwood Plan at the Victory Lounge.