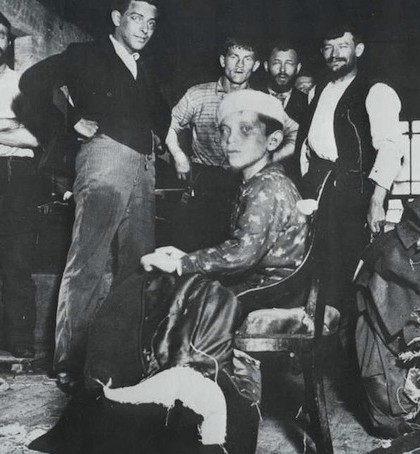 Jacob Riis is sometimes mentioned in the company of these luminaries. But Riis had something the others did not: flash powder.

The condition of the slums and the horrors of child labor in the United States were known well before the 1880s but they were rarely discussed, and when they were, only in hushed tones. Such news spread by rumor, but for many the horror was far too great to be truth, and so many dismissed such stories outright.

Jacob Riis took his camera into the tenements and slums of New York City to document these inhumane matters-of-fact but found most of his sites were far too dark for photography. The invention in 1887 of Blitzlicht, the first widely used flash powder, changed that. Timing could hardly have been better for Riis, who was even then deep into a series of articles at the New York Evening Sun about pauperism and crime. The new flash powder allowed Riis to take his camera into the darkness and changed photography and photojournalism forever.

The squalor captured by the camera in Riis’s cold, detached style was unmistakable–and incontrovertible. People who would never have believed their ears now suddenly had to believe their eyes.

How The Other Half Lives was published originally in 1890. No fewer than eleven different editions of the text are in print through various publishers. Despite this, truly good versions of the book remain commercial.

This EPUB edition attempts to remedy that. Its core is a fairly plain, digital version of the 1901 version of Jacob Riis’s text, but this edition adds over 100 accompanying photographs, similar to the 1971 reprint edition by Dover Publications.

For those whose interest in the book is primarily visual, the book has two separate indices: one index for the photographs from the 1901 edition of the book, the other for the illustrations. It is an extremely powerful book, a watershed in the annals of photography and journalism. We are happy to bring it to you.