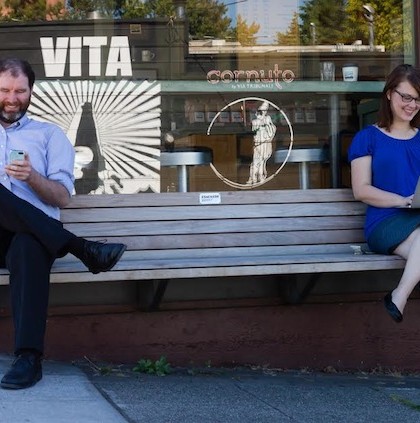 [The following is a Facebook post written by Aimée Bruneau, an actor/director based in Seattle, on the eve of the opening of the 2014 Seattle Fringe Theater Festival. It is re-printed with her permission. — ed.]

One of the biggest heartbreaks of my life had nothing to do with losing a lover.

It was the bankruptcy of the Fringe Theater Festival here in Seattle in 2003.

I lost money that year working on a successful, and somewhat artistically celebrated fringe production called Approach. We had sold out houses, the work was precise and delicious, and the four actors who performed it were nothing short of amazing. I’d borrowed money from some fancy people in the Silicon Valley to make it happen — money comes from the strangest, and yet most obvious places — I was eventually able to pay back most of it.

But the Fringe was dead. And for 10 years I mourned that loss.

I came to Seattle in 1998 with only a smattering of directing credits. I had a shiny new MFA in Acting, but it came with a shattered confidence, and a bewildering sense of displacement. I was supposed to be in New York or LA, where my classmates were (and still ever are) becoming famous. But I was waylaid by a strange, yet comforting journey to the Pacific Northwest, where I immediately endured one of the wettest winters on record. Playing Half Life most nights and ordering cigarettes and Entenmann’s Chocolate Cake from Kozmo.com, acting was something I simply no longer felt inclined to do.

And yet, kind of by accident, I eventually found myself acting in a show in 1999. I met some amazing creatures on that production: Brandon Whitehead, Tim Gouran, Mike Daisy, Kate Johnston Tucker, Steven Shults, and John Longenbaugh, to name a few. But one in particular, Nicole DuFresne, would eventually see more possibility in me than I had found in myself for a very long time. She declared me: DIRECTOR. And she decided that I would direct her in a one-woman show written by Dario Fo and Franca Rame called The Same Old Story.

I accepted this challenge, but my standards were high. I insisted we work five nights a week for nearly six months, which is generally unheard of in our world of modern day theatrics. If I was going to fail at something, I decided to invest in that fully. Directing was something I fell into, was pressured into. It was, initially, the product of a fierce, treasured, and complicated friendship.

After we’d been working for a couple of months, the Seattle Fringe Festival sent us word: we had a slot at the Odd Duck Theater [now known as Eclectic Theater on 10th and Union–ed.]. We had a venue, we had an audience, and we could actually afford to risk. This was enormous.

We went on to win an “Artistic Pick” of the Seattle Fringe Festival award. Our show was presented at Seattle Rep in the Poncho Studio. I was suddenly a “Director”, as Nicole had already decided, worth hiring every now and again. This was enormous.

Seattle used to host an internationally renowned Fringe Festival, a place where you could get your foot in the door. As an actor. Director. As playwright. We used to have wonderful opportunities like the Mae West Fest and multiple late-night cabarets to flex our creative muscles.

The Seattle Fringe Festival is attempting a comeback, and this is the most important thing that’s happened to our artistic community in a decade. We are surely nothing without the next generation of directors. The ones you haven’t met yet.

I was lucky enough to achieve the opportunity by lottery draw to work on this Festival both last year and this year. In these last two years I have been afforded the opportunity to work with two of the most transformative actors I’ve ever met: Samuel Hagen and Erin Stewart.

Last year, Radial Theater Company and I hired three playwrights (K. Brian Neel, Keri Healey & Wayne Rawley) to create something new and spectacular with a project called Aisle 9. This year, Sam, Erin and I wrote Profile; in collaborating three voices into this one story, we birthed and killed a lot of beautiful babies. The new Seattle Fringe Festival has made possible some of the most interesting work I’ve done in a long, long time.

It is not easy work managing a Fringe Festival. This rebirth is nurtured by a volunteer-based crew, who are working their asses off to make something from nothing. Okay…worse: they’re attempting to revive something that died. Something that died in such a way that the memory of it still reeks. This effort is significant. It is generously sponsored and protected by Theater Puget Sound.

We are never going to be a destination for national or international independent artists again without it. We’ll just be entertaining our own selves – like we have been. We currently don’t have a place for young directors to cut their teeth without the Fringe Festival. We are off the grid without a Fringe Festival.

Go see the out-of-town artists this weekend, some of whom are the shit in Canada and Edinburgh. Support a young troupe that you’ve never even heard of, because they’ve never been heard of.

Support the new Seattle Fringe Festival. Every show is under an hour and a mere $10. All within walking distance.