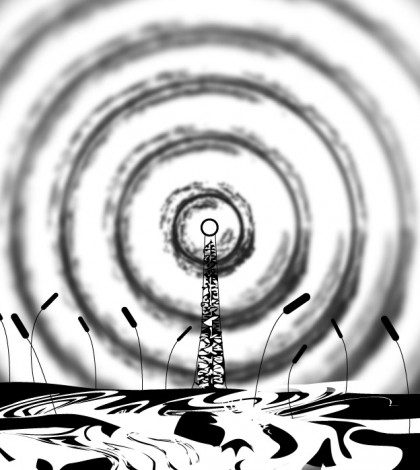 Radio drama, if one believes the BBC’s internal surveys, remains largely the pastime of female listeners over 50 years old. Science fiction being largely a pastime for males either young in age or maturity, the Beeb decided to trot out another series of Dangerous Visions this summer to see if they couldn’t balance the scales a bit.

That probably sounds cynical. It is. I’ve been singly unimpressed with the BBC’s attempt to diversify their audiences for about fifteen years now. Something about the last Dangerous Visions series struck me as calculated and a bit effete. So I tuned in this summer to see what the Beeb decided was dangerous this year.

This year’s scale is a bit larger. The schedule includes eight dramas, the same number as last year, but has also added three readings by contemporary authors Lauren Beukes, Tao Lin and Matt Haig. In the absence of a tribute to the recently dead J.G. Ballard, the Beeb decided upon a tribute to the recently dead Ray Bradbury, with adaptations of The Martian Chronicles and The Illustrated Man. They also throw in an adaptation of Philip K. Dick’s Do Androids Dream of Electric Sheep? and a fictional story based on the man himself for added nerd cred. Then there are pieces by Miranda Emmerson, Anita Sullivan, Philip Palmer and legendary ITV writer Trevor Preston. It is far from dangerous material, but then I suspect to ask for anything truly dangerous on the radio would be a bit like wishing for the millenium.

My favorite of the pieces is the least typical: Stephen Keyworth’s The Two Georges. A fictional retelling of the time when the FBI came to visit Dick at his home, Mr. Keyworth’s piece goes for the sublime and the absurd simultaneously and largely achieves it.

I was a bit less thrilled with Philip Palmer’s Dark Minds. Mr. Palmer is an excellent writer with a storied background in science fiction. His entry in last year’s Dangerous Visions, Invasion, was a strong and powerful work with an ending that rather let me down. Dark Minds has a similar problem with its ending. After an extraordinarily detailed study in character, it ties together all too nicely with a “clever” twist that is seemingly designed to undo all of Mr. Palmer’s good work.

It isn’t that the friend/ally turns out to be the original villain of the piece. That only bothers me slightly. What truly bothers me is that he could just as easily have got there more imaginatively. But instead of the piece carrying an anti-authoritarian message in line with what I’d expect from Mr. Palmer’s normally humane and dystopian vision, it suggests a world of anarchy in which individual hackers are a greater threat than the entire military industrial medical complex. The fear of technology in the piece runs even stronger than the fear of a corporatist government.

This sort of techno-pessimism runs through other pieces of the series. But it’s a shallow kind of pessmism, too, almost American in its superficiality and not what I would ever expect from the British, who should know better. It runs throughout Anita Sullivan’s The Bee Keeper and Miranda Emmerson’s Iz. It’s even more noticable in the short stories of Lauren Bewkes and Tao Lin.

Now I am far from a techno-optimist. I am not the sort of person who adheres to the prophecies of Ray Kurzweil like a religious devotee, and I am deeply skeptical about the militarization of science. But I’m not a nihilist. And I am always cautious of science fiction that tends toward a sort of nihilism, especially when the nihilism is directed toward individual humans rather than social institutions.

Miranda Emmerson’s story is more delicate than Mr. Palmer’s, as is most of her writing, but it’s also a little more fay–or is that fey? The doom in the piece is obvious from the first five minutes, as is the ending. I’m not against being able to see the end from the beginning. I know the end of Antigone but that doesn’t make it any less powerful. Instead I question the route taken. There’s a conflict between the individual’s obsession with the computerized love for Iz and his own sense of betrayal. But the conflict is bogus. Lee claims not to “want to play God” in the final scene yet he takes the life of the only person who can shut down the machine that has ruined his own life and others’ for no apparent reason other than nerves. The machine goes back online, of course, and the forces of evil win the day, as they always do.

That strong pessimism is somewhat present in the cracking adaptation of Do Androids Dream of Electric Sheep? and, to some extent, Tao Lin’s witty A Message of Unknown Purpose. And it is almost completely absent from the rest. Why?

I think a sizable part of the answer lies within the very technology that yields up such weak pessimistic visions. Science fiction, at its origin, serves two purposes. Either it is a more exotic version of the classic adventure story or it is social commentary. In the 1950s and 1960s “golden age” of science fiction, both these qualities were welcome. World War Two was a recent memory. Science had unlocked the power to vaporize the entire human race. Many countries still lay in ruins. Escaping that reality could hardly have been a stronger urge. On the other side of the scales, those ruined countries could see the lure and caution of an absolute society. Orwell’s version of a totalitarian state became palpable and immediate. Criticizing it from either side of the Iron Curtain was essential. Not having a country that lay in ruins, Americans and Brits could easily hold a belief in their own version of an absolute society, a One True Path, an American Way. Countervailing forces aside, those societies in their way were almost as rigid and conformist as those behind the Curtain. Science fiction, with its veneer of kiddie harmlessness, became an outlet for questioning that rigidity.

I’m not so sure that works anymore. European and American societies have become much more fluid. People can wear their hair anyway they wish, tattoo their bodies, date whomever they choose and barely a neighbor notices or cares. The Communist threat is long since over. The Iron Curtain has fallen. There is no One True Morality or One True Society except in the minds of the American Family Assocation and the Islamic States of Iraq and Syria. The social criticism of old sci-fi relies upon a firmly grounded and powerful society that no longer exists. American society in particular has become absurdly permissive. There is no One True Morality because there is no One True Enemy. The greatest “threat from above” now is the threat of too much freedom itself–a freedom that threatens to bury the human mind in options and variables until, a la Emile Durkheim, it is driven to anomic suicide.

Much of that “freedom” stems from the spread of technology. With a bit of immersion in electronic communication, particularly cellular telephony and non-governmental Internet connections, one can easily discover a completely alien culture without much trying. This however does not solve the problem of the technological and social future; if anything, it complicates it further. But its complexity offers no compelling reason to be fatalistic about it all. Rather, it speaks even more loudly a reason to fight to ensure a future. Just because one is lost along the way does not imply one should stop looking for a path.

Science fiction has rarely treated that phenomenon of looking for a path, which I think lies in the realm of individual ethics. Stuck in its tradition of social critique, its scope has tended toward magnitude rather than finitude. Yet finding a way forward into an uncertain future not of too few but rather too many possbilities requires humanity to re-examine its desire for magnitude and to work on a level that is immediate and finite.

Now that would be a truly dangerous vision.