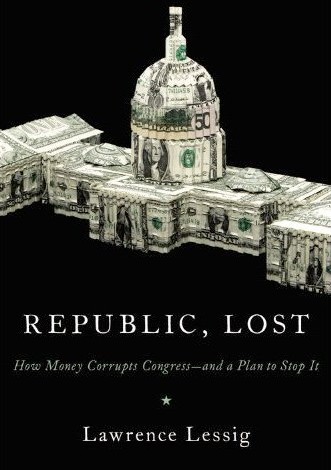 In an era when special interests funnel huge amounts of money into our government—driven by shifts in campaign-finance rules and brought to new levels by the Supreme Court in Citizens United v. Federal Election Commission—trust in our government has reached an all-time low. More than ever before, Americans believe that money buys results in Congress, and that business interests wield control over our legislature.

So it is that Lawrence Lessig’s Republic Lost: How Money Corrupts Congress–and a Plan to Stop It comes to the American people.

Much has already been said about the book, some critically astute, much of it absolutely clueless. We won’t go into it all here. It will have to suffice to say that the book is not only a coruscating analysis of the corruption of our Congress and indeed virtually all our electoral process at present, but also it is a call to action. Not acts of simply pursuing the same old strategies, based well-tired belief that it is all the other party’s fault, but acts that identify what is truly wrong with the process and pull it up by the roots.

At the time the book came out at the end of 2011, political change in America seemed quite hopeless. One could even say it looks even more hopeless now. And that is exactly the reason to fight for that change. As Professor Lessig writes at the end of his book:

I wouldn’t compare my love for my family and my love for my nation, except to say that the irrational parts in each feel very much the same. Or at least one irrational part that I would hope you saw as the same: we should be willing to do whatever we can, the odds be damned, to save both when we see, when we finally see, the threat that stands above both.

The poor do this all the time for us—not just the poor, but many, many who are poor. We call them soldiers. They volunteer to fight wars for democracy. They put their lives on the line, literally, for an argument that is, in my humble opinion, vastly more attenuated to the end of saving democracy than anything I’ve described here.

The war I’ve endorsed won’t kill anyone. And it is a war we can’t rely on poor people to fight alone.

So you pick your poison. You tell me which hopeless strategy is best. Or you come up with a better one. But don’t tell me this is hopeless. Hopelessness is precisely the reason that citizens must fight.