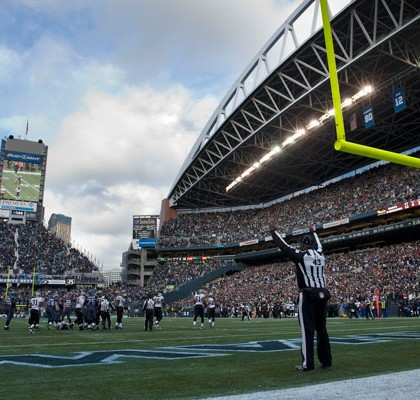 A couple of Fridays ago, the Seattle Mariners won their biggest game in several seasons. In the midst of a long road trip and the beginning of a minor slump, the M’s orchestrated a dramatic ninth-inning comeback against the defending champion Boston Red Sox.

Alas, the baseball pennant race ranked as the number-two sports story on the local nightly news. The Seattle Seahawks, as in the defending Super Bowl champion Seattle Seahawks, were playing their first pre-season home game of the year. Even if the Seahawks hadn’t posted an impressive win over the San Diego Chargers, the local TV newscasts have turned into de facto post-game shows whenever the Hawks play a night contest. Cameras and reporters were already in place at Century Link Field; no love for the team playing a meaningful game 3,000 miles away.

There’s no doubt, the Seahawks are the `in’ thing in Seattle. For the past two football seasons, people who previously didn’t know their tight end from their elbow or thought the 12th man was named in honor of a player who wore number 12, have tuned in to follow the fortunes of the local football franchise. Longtime fans might get a little churlish towards the bandwagon-ers, but everybody loves a winner. The whole city celebrated when Seattle manhandled the Denver Broncos, 43-8, in the Super Bowl.

It helps that the Seahawks have an interesting and eclectic ballclub. When they defeated the San Francisco 49ers to advance to the Super Bowl, All-Pro defensive back Richard Sherman went on a nationally televised post-game rant about how good he and the Hawks were. Of course, it was Sherman knocking down a pass by SF quarterback Colin Kaepernick that gave the Seahawks the victory. In an instant, everyone who complains on social media about passive, timid Seattleites had a new hero.

Running back Marshawn Lynch is another example of the stars aligning where a player’s talent and personality make him a fan favorite. Make no mistake, Lynch could blow Skittles out of his nose and no one would care if he wasn’t an All-Pro running back. Lynch made his mark early in his Seattle tenure with an electrifying 67-yard run in the playoffs against the New Orleans Saints in 2011. He went into `beast mode,’ breaking nine tackles en route to a touchdown as the Seahawks’ 12th man set the first of several noise records.

Unfortunately, most running backs tend to wear down by their 30th birthday and Lynch turned 28 in April. It’s also the nature of football that players, even star players, who try to avoid training camp and other functions like Super Bowl media day and a trip to the White House, might get the boot a little quicker. Seattle has two young running backs – Robert Turbin, who is returning for his second year, and Christine Michel – both of whom should see some action this season. Turbin’s father was a pro athlete – Ronnie `The Spider’ Turbin was the Male Rookie of the Year for 1968 in the International Roller Derby League. Now a pastor in Oakland, `The Spider’ wasn’t a big fighter but a very fast skater.

The Seahawks begin their Super Bowl title defense tonight against the Green Bay Packers. Only eight teams have won two consecutive Super Bowls in the 47 years of the game’s existence. And four of those repeaters were in the first 15 years, when there were fewer teams, less roster turnover and less parity between the teams. On paper, Seattle has a better shot of repeating than some Super Bowl champions of recent years.

Seattle boasted the second youngest team to win a Super Bowl and allowed fewer points than any team in the NFL a year ago. Championships are won on defense and except for a couple of veteran linemen playing out their options, all the Hawks’ valuable suspects return.

Offensively, the Seahawks are in the odd situation where their best player could wind up being Percy Harvin, who hardly played a year ago. The former Minnesota Viking showed Seattleites what he could do when he ran the opening kickoff of the second half back for a touchdown in the Super Bowl. Harvin’s a receiver, a kickoff returner, and can run the ball out of the backfield if he really has to.

Seattle fans love Russell Wilson and Pete Carroll but they’re not ranked as highly as some quarterbacks and coaches in the national media. Wilson might not light up your fantasy football team (sometimes the Tony Romos and Cam Newtons of the world put up better numbers) but Wilson’s a very intelligent guy who isn’t going to cost your home team many games. And quarterbacks are probably judged more by their team’s won-loss record than any other team sport athletes.

Carroll’s more like a baseball manager than a Woody Hayes or Bear Bryant from a bygone era. He doesn’t hassle his star players, is good with the media, and most guys seem to want to play for him. My `personal encounter’ with Coach Pete came when he was coaching the New England Patriots and I was covering some nearby Massachusetts schools for a Rhode Island newspaper.

I went to a volleyball playoff game one night and saw Medfield High and its much-hyped All-State player, Jaime Carroll. When I got settled in, I realized that Jaime’s father was sitting near me. Yup, the coach of the New England Patriots. What made the coach’s appearance surprising, and kind of cool, was that the Patriots had a big game just two days later with their division rivals, the Buffalo Bills. This was when you heard a lot about NFL coaches who’d stay in their office all week, and never make it home. Jaime Carroll eventually got a volleyball scholarship to USC, and I guess they liked her so much they made her father the football coach a few months later.

To throw out one more sports cliché – the only team that might stop the Seahawks this year are the Seahawks themselves. The 49ers and the Broncos don’t appear to be as good as a year ago and New Orleans, New England and Indianapolis aren’t quite at the Seahawks level. But Seattle can’t afford to get too cocky. Chances are the Seahawks will lead the league again in on-field penalties but they need to avoid off-field suspensions and other distractions.

Seattle could be on the cusp of winning its second consecutive Super Bowl and it should be fun to watch.