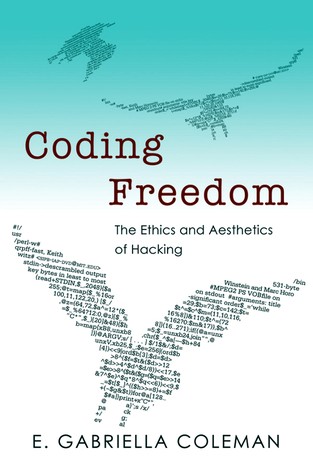 This week we turn toward the world of technology–specifically the culture of hacking.

There’s been a lot of hero-worship and demonization both of hackers throughout the years, but there are relatively few accounts of the culture of hacking written by an outsider for outsiders as a way to understand this unique subculture in all its aspects. Coding Freedom: The Ethics and Aesthetics of Hacking is Gabriella Coleman’s first book-length entry into this field, which she has followed up with her study of the hacker group Anonymous, Hacker, Hoaxer, Whistleblower, Spy: The Many Faces of Anonymous.

Ms. Coleman’s approach here is anthropological rather than technical. She is much more interested in group dynamics and cultural aspects of hackers as a loosely unified group of beings than as nameless worker drones. She attempts and largely succeeds to create an accurate portrayal of hackers as people within a community than as saints or demons or other stereotypical exaggerations one finds throughout the mass media.

Better still, though, is that her language is lucid and largely removed from the world of academic jargon. She writes to be understood not just by hackers and academic scions in the humanities, but by anyone who has a legitimate interest in the subject. Which is as it should be. Her primary argument–that the hacker tradition offers an interesting confirmation and simultaneous critique of the European-American tradition of liberalism–is laid out by personal examples rather than merely theoretical discussion. She also displays an excellent knowledge of the way the hacker community really functions and how their concerns have matured as the world of their “hobby” has collided with the world of big business and legalism.