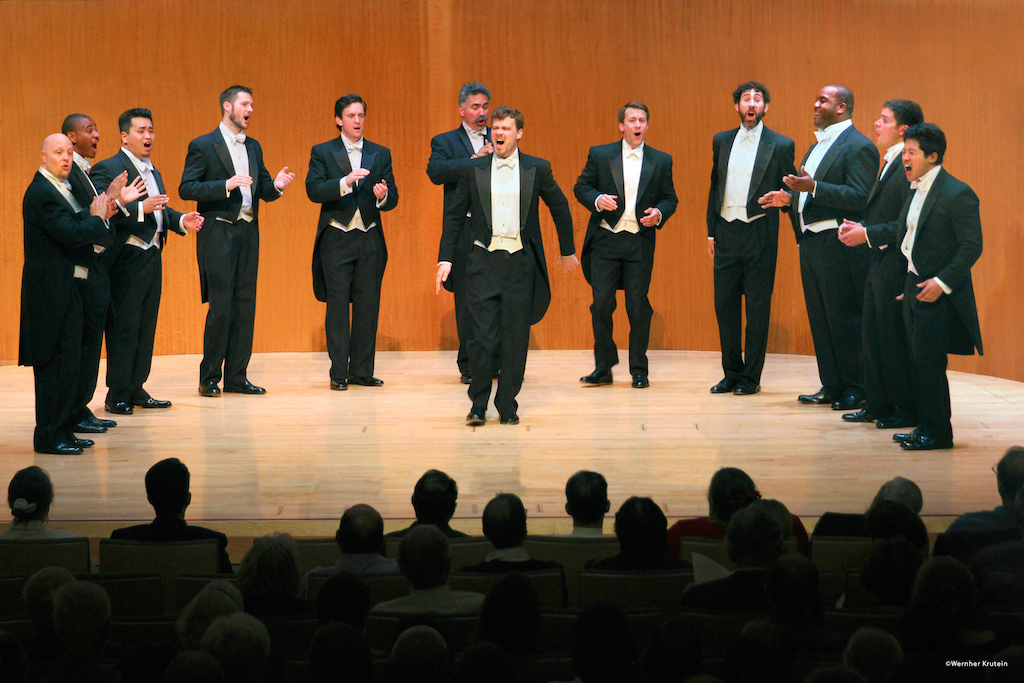 The lights go down. The stage is empty. The audience shuffles restlessly as everyone settles in. There is a long pause, not quite silent, but still.

Then there is singing. Unison singing. It seems to be coming from all around, though there are no performers visible. It begins softly and gradually swells.

At the rear of the platform, the performers pass through the two doors at either side, forming two gently curving lines as they enter the stage. Each carries before him a songbook. Each hears the others. Each sings with the others. It’s a simple chant, that genre that musical folks call “plainsong.” This is anything but plain. The volume swells.

The two lines of performers weave through each other, crisscrossing paths, yet still rapt in concentration as they sing. It’s as though they know exactly where they are, and where everyone else is. The lines break off into a gentle semicircle as the group stand facing the audience, books in hand, not a note dropped, not a moment broken.

It’s all crystalline. Each voice layered over the other in that wonderfully direct monophonic texture that makes people rediscover Gregorian chant every couple decades in our culture.The voices are so tightly woven I can hear that “little bird” my teachers used to talk about–that series of harmonic overtones that sounds like something ringing out over all the voices, yet produced by no one of them individually. It’s exquisite. It’s clear. It’s Chanticleer.

And then without an extended introduction, the performers switch places with each other and go into the Josquin Desprez O Virgo virginum which is even more supernal than the plainsong opener. From a Spring song to a Winter song–and I’ve always loved this piece. Chanticleer are well familiar with it: they recorded it in 1991 on their Psallite CD. It’s a gorgeous tune, on the border of polyphonic and polychoral singing with lovely movement in the low voices.

Throughout the evening the choir rearranged itself into highly structured vocal groupings creating different colorations for each piece. The Gabrieli Angelus, while a later piece than the Josquin, looks backward beyond it from the polyphonic style of the Renaissance to the plainsong style that opened the evening. The singing here was powerful, with a brassy finale one expects from Gabrieli, yet sensitive, too, even tender.

Angelus ad pastores ait a 12 is the first of five consecutive pieces on the bill that Chanticleer have not yet recorded, followed by Clemens non Papa’s word painting motet, Pastores loquebantur, and a second Josquin Desprez piece, Praeter rerum seriem. Both are well-suited to Chanticleer, enough that I am hoping they record then both, particularly the Clemens non Papa work. Then there follow three diverse pieces: Orlando di Lasso’s Magnificat Secundi Toni, Alfonso X de Castille’s praise song Rosa das rosas, and the exquisite first half closer, Sã qui turo zente pleta.

The Magnificat elaborates upon the Josquin Desprez motet Praeter rerum seriem. The Josquin motet itself is complex: it’s built upon a devotional song itself, with contrasts between the high voices and the low voices switching between the vocal groupings whenever the lead melody switches between soprano and tenor. It’s quite extraordinary and inspired not only Orlando di Lasso to build another piece from it, but other composers as well, including Cyprian de Rore. Listening closely to the Orlando version, one can hear the composer return to the original chant even as he quotes the Josquin. It’s somehow more simple and more intricate at the same time, and the choir are obviously into it. Their rendition is heavenly.

Less intricate harmonically but more rhythmically intricate is Rosa das rosas. I’m a sucker for Marian songs, and this is one of my favorites. It’s written not in Latin but in common tongue, meant to reach the people. It obviously reaches the crowd here. People who were nodding off during the intricate Magnificat suddenly come to attention and are enthralled by the lovely singing. After this, the Portuguese festival song, Sã qui turo zente pleta is a wonderful bit of thoughtful programming, allowing the listeners to come back to earth gently with another vernacular song, but also to connect the European sounds of the program so far to African music. It’s all very straightforward, but one may forget its brilliance because it fits so naturally.

After a brief pause, the choir return to the stage and begin a set of three pieces from their latest recording, The Gypsy in My Soul: two different settings of Super flumina Babylonis are separated by William Byrd’s Civitas sancti tui. The Palestrina version of Super flumina Babylonis is very solemn. It’s a short piece but it feels long, suffused with pain, as it recounts the opening of Psalm 137. By comparison, the Tomas Luis de Victoria setting of the psalm is almost jaunty. The Palestrina piece is built on slow-moving counterpoint and dissonance, making it sound mournful. The Victoria is instead built upon staggered rhythms. It moves more quickly even though it sets twice as much of the Psalm 137 to music as the Palestrina. It is by far my favorite piece of the evening, given an excellent interpretation by the singers, full of a restrained, sober joy–but a joy nonetheless.

And then we go backward in order to go forward. The restrained plainsong Salve Regina is the next piece, taking the audience back to the Gregorian period. It’s well-known and well-loved, and well-done by Chanticleer here, if a little spartan. But the spareness of the arrangement makes perfect sense as the group move into the next piece, which opens with the tenor voice singing the plainsong again before launching full-bore into a lavish Baroque arrangement of Salve Regina arranged for eight voices. Antonio de Salazar’s piece clearly belongs to another world from all the other pieces of the evening, yet is obviously connected to them. This piece from the Mexican Baroque is even more harmonically challenging than the di Lasso Magnificat, moving from a solemn chant to a dense layering of voices and a particular crescendo as the unison voices cry out O merciful, O loving, O sweet Virgin Mary. It’s an amazing work, one that very few people have recorded. I can only wonder why. Is it that it’s too Renaissance-sounding to attract fans of Baroque music? Is it too Baroque sounding for fans of early music? Does it matter? Chanticleer have championed this piece for quite some time but even they’ve never committed it to wax. I hope they rectify that mistake soon.

The evening closes with three Russian pieces. The Gloria (слава в вышних богу) section of Rachmaninoff’s renowned Op. 37, the All Night Vigil starts it off. I’ve forgotten how, apart from the chromaticism, truly medieval this piece actually sounds. Then it begins: a positively awe-inspiring rendition of Sviridov’s Prayer (Молитва), the first of three choruses from his adaptation of Alexei Tolstoy’s Tsar Fyodor Ivanovich (Царь Фёдор Иоаннович). I’ve heard this piece dragged out to almost five minutes, with a tempo that is even more turgid than it is lugubrious–an obnoxious choice for a song about rejoicing. Here the tempo strikes me as just about perfect, and the control of the harmonic movement and dynamics is celestial. The concert officially closes with Golovanov’s Pater noster (Отче наш), which is an odd yet fitting choice. I suppose it’s a bit more triumphant to close with the intricate setting of the Lord’s Prayer than the quietly receding Sviridov piece.

I’m not complaining as those mysterious Russia-via-France harmonies reverberate through my whole body and transport me to that place where the heavenly choir sounds something like Chanticleer on a rainy spring night in Seattle. The encore of “Swing Down Sweet Chariot” is just an obvious extension of Chanticleer’s devotion to tying together the musical traditions of Europe with the Americas. I’ve been on a trip from Medieval Europe through the Renaissance to the Mexican Baroque and the Twentieth Century of Russia that hearkens back to Medieval Europe. With such powerful guides, I’d take that trip any time, and I hope to take it many more times in the future.