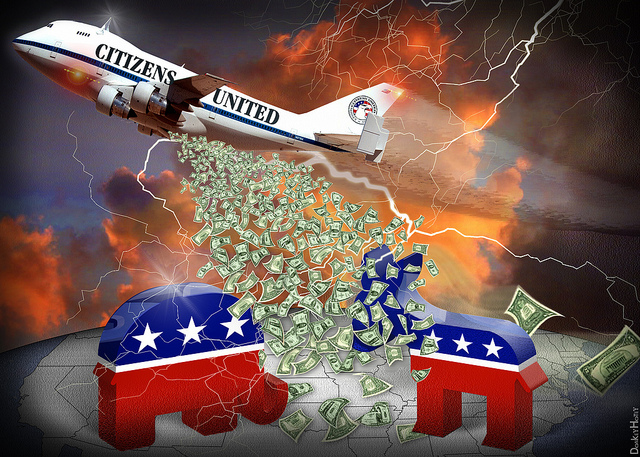 As 2016 U.S. presidential campaigns get underway, candidates are already raking in unprecedented amounts of donations—and being accused of violating campaign finance laws, according to new reports.

But the Federal Election Commission (FEC), the agency in charge of regulating campaign finance, along with the U.S. Justice Department, are unlikely to do anything to stop it.

According to statements from commissioners, the FEC is hampered by internal partisan disputes that have prevented it from making any progress on reining in abuse of those laws.

Reuters journalist Michelle Conlin on Thursday pointed to the “charade” campaign of former Florida Governor Jeb Bush, whose yet-undeclared candidacy status allows him to “skirt all sorts of campaign fundraising rules,” as an example of the kind of election-season bonanza going unchecked by the government.

“Jeb Bush is seen as the most egregious possible violator of campaign finance law,” Conlin said.

Campaign finance laws bar declared candidates from maintaining such a close relationship with an independent PAC. But Bush is not subject to such a bar since he has still not officially declared his candidacy – even though he effectively launched his campaign months ago.

…Yet even the most cleancut cases involving election law violations are perilous for federal prosecutors. As it turns out, one of the Justice Department’s missions is to avoid getting involved in politics in the first place.

With current estimates putting the cost of the 2016 presidential campaign at $10 billion—more than double the price tag of the 2012 season—the election is expected to bring in record donations but little oversight. FEC chief Ann M. Ravel in May told the New York Times that the agency’s internal gridlock made it “worse than dysfunctional.”

Some of the six commissioners “are barely on speaking terms, cross-aisle negotiations are infrequent, and with no consensus on which rules to enforce, the caseload against violators has plummeted,” the Times reported.

Those conflicts are compounded by the new era of political fundraising ushered in by the U.S. Supreme Court’s 2010 ruling on Citizens United v. FEC, which opened the door for unlimited political spending by corporate entities, much of it undisclosed—as long as they donated without coordinating with candidates.

All of the people interviewed said the department would be reluctant to do anything during election season out of concern it would appear politically motivated.

They also noted that, even after the election, campaign finance cases would be extremely difficult to bring, especially since the department has been spooked by some high-profile failures in recent years.

…A little-noticed passage of the official manual that guides federal prosecutors specifically warns against interfering in elections. And two Justice Department officials speaking on the condition of anonymity said U.S. prosecutors are instructed to be cautious when contemplating bringing cases against politicians.

That’s not to say that campaign insiders couldn’t come forward with incriminating evidence of campaign finance law violations from behind the scenes—but whether the FEC would rush to make a case on those grounds remains to be seen.

“It’s considered highly political to go after a presidential candidate before an election,” Conlin said.