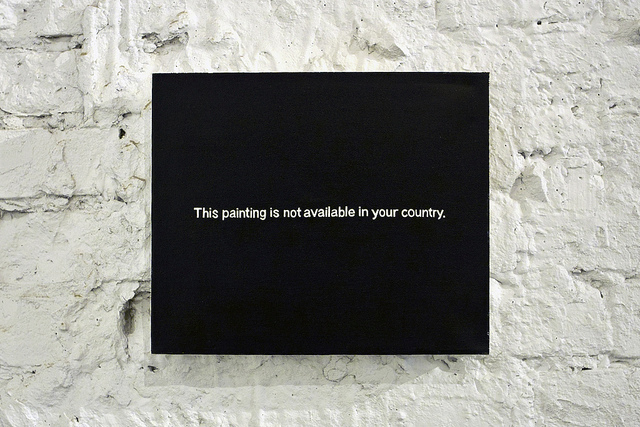 Hungarian artist Paul Mutant’s This Painting is Not Available In Your Country is one of the artworks that adorns the wall of EFF’s office in San Francisco. To many Americans, the significance of the piece is somewhat obscure. But almost every European Internet user recognizes it instantly—they encounter a similar message every time they attempt to watch one of the many YouTube videos that rightsholders haven’t licensed for streaming in their country. Similar geographical restrictions impede Europeans’ access to pay services, such as Netflix, when they travel abroad (assuming they are lucky enough to be able to subscribe to begin with—in over two-thirds of the world, Netflix is unavailable at any price, without the use of a location-fudging VPN).

Geographical blocks are just a tiny part of the problems in European copyright law, under which some countries even rule it illegal to take holiday snapshots of public buildings. Member of the European Parliament (MEP) Julia Reda highlights those problems in a report that she drafted for endorsement of the European Parliament. The perverse outcomes of European copyright—which Julia has termed “copywrongs”—are also highlighted on an eponymous website that guides Europeans through the process of contacting their representatives with their views on her draft copyright report. And now is the time to do so: the European Parliament’s legal affairs (“JURI”) committee will vote on whether to endorse the report tomorrow, 16 June.

When we last wrote about progress towards the finalization of the copyright report, we noted some regressive proposals for amendment, including several which would threaten the right to link (our sidebar widget highlights this threat, and it’s free for you to use on your own website too). Negotiation over those amendments has resulted in a compromise proposal [PDF], released today. The text of this proposed compromise does water down some of the strengths of MEP Reda’s first draft report; for example:

Although we are not pleased with these compromises, their passage through the JURI committee will at least stop some of the more harmful alternative proposals for amendment, such as those that would curtail freedom to link, from proceeding further at this time. Therefore, we will still be able to count the committee’s vote as a qualified victory if the compromise version of the report passes next Tuesday.

One of the key messages from the vote will be to push back against the spread of ancillary copyright laws, such as laws that require press publishers to pay for the right to link to news stories using short text snippets or thumbnails. Austria is the latest country to follow the lead of Germany and Spain in introducing such a misguided law. The compromise version of the Reda report decries such provisions, which it describes as being “aimed at news aggregators for acts that are already permissible”, on the ground that they “can cause significant damage to the digital economy.” Not only do they do that, but they weaken one of the building blocks of the Web as we know it—the ability for anyone to link from one resource to another, without payment or permission.

The passage of the Reda report through the JURI committee, even if in weakened form, will be an important step towards the reform of a thoroughly broken copyright regime that is harming European users and holding back innovation and investment. If you live in Europe, or have friends who do, you still have time to visit copywrongs.eu and follow its instructions to contact your representatives at the European Parliament with your views on the key recommendations of Reda’s report.