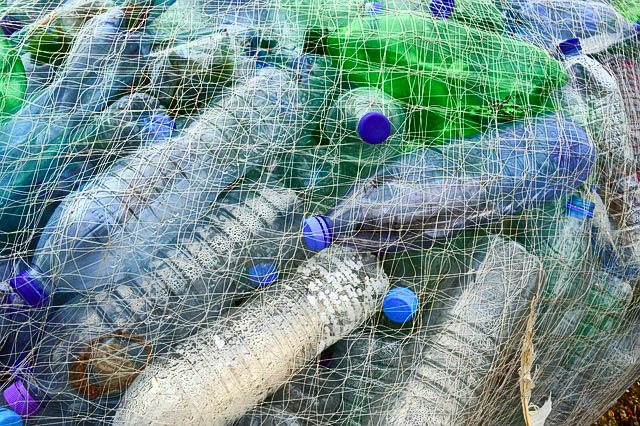 You are probably already aware of the mass of garbage in the Pacific Ocean, commonly known as the Great Pacific Garbage Patch or Trash Vortex or Trash Gyre or some combination thereof. You are probably familiar with the description wherein this Garbage Patch/Vortex/Gyre is represented as an island of trash roughly twice the size of Texas floating somewhere in the vicinity of Hawai’i. You may have heard that 80% of the waste comprising the Garbage Patch is plastic and have probably seen images of dead albatrosses–dead, you will have been told, because of the whole plastic bottle caps and lighters it mistook for food–or dead jellyfish or seals or sea lions or sea turtles or whales. Somewhere in this mesh of information lies the first myth of the Garbage Patch.

Missing from that myth is a key series of related facts. That the debris breaks down into microscopic pieces. That the garbage actually constitutes more of a “plastic soup” than any kind of patch or island, and that its pollutants are, as a result, widely dispersed. That what breaks down doesn’t remain solely in the Garbage Patch; that anywhere ocean currents converge is this toxic soup. That this soup is suffused with Bisphenol A, pthalates, polychlorinated biphenyls, persistent organic pollutants, and other remainders from discarded commodities that contribute directly to the ocean acidification killing fragile ecosystems from the coral-based Great Barrier Reef off of Australia to Inuit territories in the Arctic. Far from a solid, particulate island, the Garbage Patch is, along with the rest of the ocean’s water, in constant motion. And it doesn’t necessarily stay at surface. In 2010 a team of ecologists, studying ocean garbage patches, observed that the plastic in them accounted for only a small portion of the plastic that has been produced since World War II. “[W]e don’t know what this plastic is doing,” said marine biologist Andres Cozar Cabañas, who worked on the team, adding only that it “is somewhere — in the ocean life, in the depths.”

We hear reports about the effects of this dispersed waste all the time. Hundreds of thousands of marine birds, fish, reptiles, and mammals die annually from ingesting or becoming entangled in marine debris. Sharks, hungry because their prey is dying off, have been attacking humans more often in the last two decades than ever previously. In Alaska, sperm whales are resorting to snagging black cod from the lines of fishermen. Polymer fibers get embedded on corals and on the ocean floor, where they suffocate the coral communities that process carbon dioxide and release pollutants into the food web. The number of anoxic zones–places where oxygen levels have dipped too low to support life–keeps rising; the quarter of the planet’s biodiversity whose home is the coral reef is rapidly decreasing; and a team of ecologists have predicted the extinction of all saltwater fish by 2048.

Yet even at their most apocalyptic, these reports have the feel of isolated incidents rather than the various manifestations of a late capitalist global system in which value’s counterpart is increasingly and necessarily waste. Under this system, the overwhelming majority of goods that make convenient consumer culture possible are composed of manmade polymers, including but not limited to whiskey bottles, water and soda bottles, bottle caps, six-pack loops, industrial felt, fishing rope, nylon flags, fleece sweaters, shoes, purses, eating utensils, cups, bowls, cell phones, computers, printers, furniture, toys, and, of course, plastic bags.

We weren’t always so surrounded with the stuff. Goods and tools used to be made to last a lifetime out of organic materials such as metal, wood, and earthenware; when objects broke they were repaired for as long as possible, then thrown to the earth to decompose. Disposable income in the booming post-World War II economy made it much easier for people used to living with limited means to simply acquire new goods instead of continuing to reuse old ones. According to Jeffrey Meikle, author of American Plastic: A Cultural History, after World War II resin makers “mounted a major educational effort to accommodate the consumer to new, previously unknown plastics. People neither naturally gravitated to the stuff, nor did they instinctively throw it away, so the industry also had to insulate consumers to plastic’s disposability.” It’s no coincidence that the escalation of the abovementioned effects–the rise in hungry whales, shark attacks, dying coral, anoxic zones and so on and so forth–have coincided with quadrupled plastics production since the massive neoliberal deregulation of the 1980s.

From our vantage point within capitalism, it is difficult to identify the origins of this plastic and see where it ends up in the waste stream. It is difficult to trace a disposable container of strawberries back to a multinational biotech corporation and its compulsory distribution of genetically modified seeds and pesticides to the resulting runoff that eventually washes to the ocean. It can be a challenge to chart the paths of the independently-contracted trucks that carry such containers to the ships that export U.S. recyclables to Asia, never mind account for where the waste goes upon landing. It’s hard to keep in mind that the bunker oil fueling those ships and the processed petroleum in that strawberry container might have been mined by the same London-based oil company, and harder still to tease out the many and various geopolitical infrastructures–including the surveillance cameras, barbed wire, and armed security checkpoints of the global security state, for just one example–that prop up that company’s transnational holdings. It is easy to treat the interdependence of these dynamics as too complex to grasp. But to shy away from this complexity is to help maintain the capitalist status quo.

While we stay busy not seeing the complex market interplay that produces and then abandons our plastics, the first myth of the Garbage Patch continues apace. Liberal do-gooders advocate for the use of massive nets to gather ocean plastic, imagining an easy extraction of waste from environment. Meanwhile, back on land in the wealthiest communities, people are urged to purchase solutions. Whole Foods invites customers to eat in bulk from the salad bar with a bioplastic fork derived from renewable sources, which, even if it manages to break down in the oxygen-free environment of the sanitary landfill, produces methane, a greenhouse gas twenty-three times more potent than carbon dioxide, in the process. The startup Shorecombers sells “Trash Blasting Tourism,” seven-day trash cleanup vacations, half of which is spent online. Clothing made from recycled plastics is available from brands like G Star Raw and Patagonia, but these articles still shed microplastics into the waste stream every time they are washed.

Green capitalism is still capitalism, fundamentally unsustainable and exploitative, and while the world’s most privileged consumers insulate themselves, its devastating ecological effects hit poor communities living in the world’s severest locations especially hard. While Americans and Europeans with money can fill their diets with certified “ethical” fish, this isn’t really an option for native people in the circumpolar North—including the Inuit of Greenland and Canada, the Aleuts, Yup’ik, and Inupiat of Alaska, the Chukchi and other tribes of Siberia, or the Saami of Scandinavia and western Russia—whose cultures as well as diets depend on the ocean. Living, working, and fishing at the edge of glacial sheets, these people can’t really choose not to eat fish with plastic embedded in their scales, or the exorbitant concentrations of pollutants in the larger marine mammals high up in the food web—the ringed seals, walruses, narwhals, and beluga whales—that are both dietary staples and sources of clothing and building materials. Because of the cold and low Northern sunlight, pollutants break down especially slowly – over the course of decades or even centuries, according to Marla Cone, author of Silent Snow: The Slow Poisoning of the Arctic. Cone has also noted that even in the 80s Arctic mothers had seven times more PCBs in their milk than their counterparts in Canadian cities.

“At the periphery of the global capitalist system,” writes Chris Chen in “The Limit Point of Capitalist Inequality,” “capital now renews ‘race’ by creating vast superfluous…populations from the…descendants of the enslaved and colonised.” It’s no accident that plastic pollutants pool in the communities that capitalism has historically treated—and continues to treat—as refuse. Somewhere in that convergence—in the attitude that everything that gets thrown away stays far away—lies the second myth of the Garbage Patch.

“It’s been the end of the world for somebody all along,” says writer, spoken-word artist, and indigenous academic Leanne Simpson. Recent studies show that marine pollution and ocean acidification, once thought a separate if parallel disaster to climate change, are in fact contributing to global climate disruption, suggesting that, ecologically speaking, there is no such thing as somebody else’s end of the world. Although the idea of the Garbage Patch is entrenched in the collective imagination, we can use language to help dislodge it. We can begin this process by rejecting the myths of the Great Pacific Garbage Patch. We must stop thinking and talking in terms of an island that captures everything we throw away in a faraway fever dream of plastic bags and marine birds, and begin to map out the deeply interconnected web of plants, animals, humans, and non-living things in which we actually exist. We must recognize that capitalism depends on us not seeing this web and that capitalism will never fix marine pollution or climate change. As long as, like Andres Cozar Cabañas’ missing plastic, there are lives whose fates remain distant and unaccounted for, everybody’s fates are at risk.