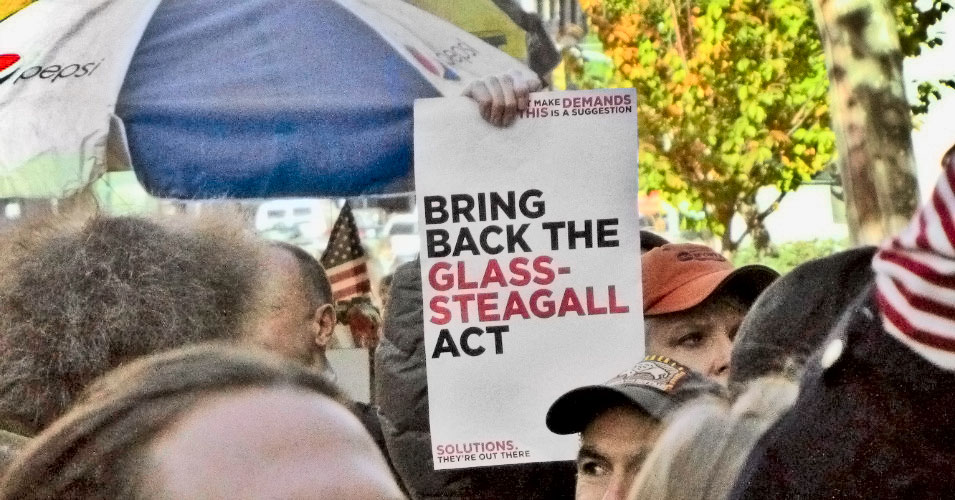 In a move explicitly aimed at reining in risky Wall Street excess, a bipartisan group of lawmakers led by Sen. Elizabeth Warren on Tuesday introduced what they call a “21st Century Glass-Steagall Act” that would restore the wall of separation between investment and commercial banking.

While its sponsors say the proposed legislation (pdf) would protect taxpayers and make “Too Big to Fail” institutions smaller and safer, its introduction has the added benefit of putting Democratic frontrunner Hillary Clinton in the hot seat on Wall Street reform.

The bill (pdf) was introduced Tuesday by Sens. Warren (D-Mass.), John McCain (R-Ariz.), Maria Cantwell (D-Wash.), and Angus King (I-Maine), who say it would reduce risk for the American taxpayer in the financial system and decrease the likelihood of future financial crises. The original Glass-Steagall legislation, they explained in a statement, was introduced in response to the financial crash of 1929 and separated depository banks from investment banks—with the goal of dividing the risky activities of investment banks from the core depository functions that consumers rely upon every day.

Its proponents, including presidential candidates Sen. Bernie Sanders and former Maryland Gov. Martin O’Malley, contend that President Bill Clinton’s repeal of the legislation in 1999 was part of deregulation that contributed to the 2008 economic collapse.

Put simply, the legislation would separate traditional banks that offer savings and checking accounts and are insured by the Federal Deposit Insurance Corporation (FDIC) from riskier financial institutions that offer services such as investment banking, insurance, swaps dealing, and hedge fund and private equity activities.

In remarks delivered in April at a Levy Institute conference on financial regulation (listen here), Warren said the bill would “rebuild the wall between commercial banking and investment banking.”

She continued: “If banks want access to government-provided deposit insurance, they should be limited to boring banking. If banks want to engage in high-risk trading, they can go for it—but they can’t get access to insured deposits and put the taxpayer on the hook for some of that risk. It’s that simple.”

Bartlett Naylor, financial policy advocate for Public Citizen’s Congress Watch division, echoed Warren in a statement on Tuesday. “Banking should be boring,” he said. “With the erosion of the 1933 separation between safe and speculative banking, however, bankers have used their government-guaranteed debt, also known as deposits, to make risky bets.”

However, as The Hill points out, “the bill itself has virtually no chance of becoming law this Congress.”

While that may be true, the bill is likely to provoke questions on the 2016 campaign trail about candidates’ attitudes toward Wall Street and big banks.

“The reintroduction of Glass-Steagall is great news and a reminder that Wall Street’s irresponsible actions deprived millions of people of their homes and life savings,” said Progressive Change Campaign Committee co-founder Adam Green. “Wall Street reform should be among the economic populist issues at the center of the 2016 debate, we hope to see bold proposals from presidential, Senate, and House candidates.”

Progressives are demanding such proposals from Wall Street candidate Hillary Clinton in particular—and getting little in the way of response.

In March, Campaign for America’s Future analyst and former Wall Street executive Richard Eskow noted that “although she criticized a GOP attempt to roll back Dodd-Frank, Clinton has offered little in the way of Wall Street criticism or specific proposals for additional reform.”

He continued: “Clinton’s potential challengers, by contrast, appear to have all read the same political tea leaves. Although they are presumably speaking from conviction, their positions also line up quite favorably with polls from the past year that demonstrate a striking level of anti-Wall Street sentiment.”

According to Public Citizen, more than 700,000 Americans have signed multiple petitions (see here, here, and here) calling for the restoration of Glass-Steagall.