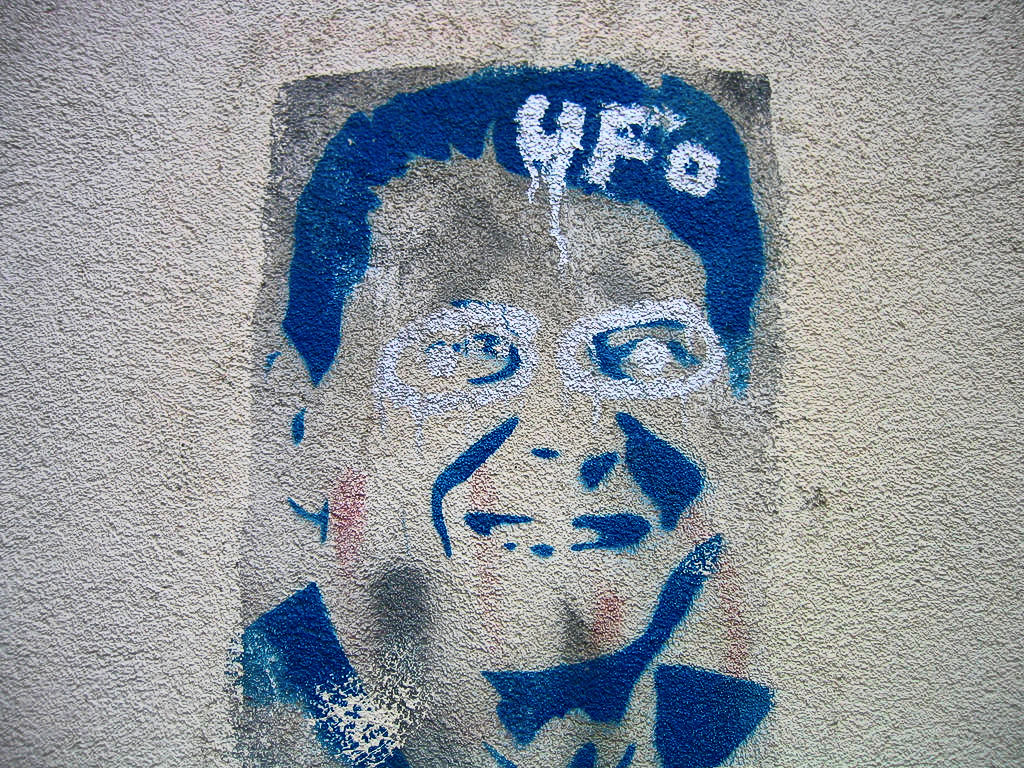 It had been a numbingly cold Pennsylvania winter in 1981. On one particular day, however, a day which happened to be Ronald Reagan’s inauguration day, the temperature warmed well above freezing. With the prospect of an unseasonably warm and sunny day looming, I decided to skip my freshman classes at the local community college.

Later that morning, I stood at the intersection of Union and Division Streets, waiting to meet up with my friend Rudy. On a nearby telephone pole, a faded yellow ribbon, the symbol of the American hostages held captive by Iranian revolutionaries, flapped in the breeze. As usual, Rudy was late. Just as I was about to give up on him and head back home, Rudy approached. He had a distinctive walk you that made him standout from a distance. With his head tilted at a slight angle and his arms clutched at his sides as if he was carrying a pair of invisible grapefruits, he approached. His shoulder length strawberry blonde hair, which he painstakingly parted in the exact geographic center of his cranium, bounced in precise syncopation with each of one his approaching steps. His bobbing head reminded me of the miniature spring- necked tiger my Uncle Ralph kept on the back windowsill of his 1965 Ford Falcon.

“You’re late,” I mumbled as he approached.

“Check it out. I got us something.” Rudy reached into his jacket pocket and pulled out a small square of tin foil. He unraveled the foil and produced two tiny squares of white paper. On each tiny sheet, there was a minuscule image of Mickey Mouse wearing a sorcerer’s apprentice costume.

“Have you ever tried it?”

“No, but it’s supposed to be good. Cost five-bucks a hit!” He handed me one of the tiny squares of paper.

“How you supposed to take it?” I asked.

“You put it in your mouth under your tongue.” He demonstrated by placing the square in his mouth.

“You sure you want to do this?” I suddenly remembered a horrific educational film from my ninth-grade health class. In the film, an unsuspecting teenager took a hit of LSD. When he looked into a mirror, he saw a hideous three-headed monster, then jumped through a plate-glass window to his untimely death.

“Yeah, fuck it.” I agreed and slipped the sheet of paper under my tongue.

“Fuck it” was Rudy’s motto. Whenever one of life’s challenges confronted him, he would utter those two words and forge on, face first into the mire. In his eighteen years, Rudy faced many challenges. When he was twelve years old, his mother moved the family from Minnesota to Pennsylvania to escape the brutality of his alcoholic father. They finally fled one fateful day after Rudy tried to save his mother from a savage beating. On this particular day. his father threw Rudy out a second story window. As he tells the story, a side roof cushioned his fall on to the cement driveway. He would often brag how fortunate he was to come away with only a few scratches and broken collarbone.

Last year, with two months to go before his high school graduation, he suddenly decided to quit school. I tried to warn him that he would regret his decision. Of course, Rudy responded with his favorite two words, “Fuck it.” Since quitting school, his life revolved around his two favorite activities: drinking beer and smoking pot. He was legendary in our parts because of his talent for rolling the perfect marijuana cigarette. If joint rolling were an officially sanctioned Olympic event, he would surely be the American gold medallist. People still talk with reverence about the time he rolled a perfect one handed joint, while doing a hundred and eight miles an hour in a stolen GTO.

Waiting for the acid to kick in, we approached our favorite hangout, a flood control levy we called “The Dike.” The Dike was our sanctuary from the prying eyes of the outside world. It was an urban oasis littered with industrial waste and empty beer bottles. The 20 acre tract of land featured railroad tracks, an old construction site, and lots of wide-open space. It was the place where I smoked my first cigarette, took my first swig of beer, and had my first awkwardl kiss with Mary Lou Johnson. Since I was not sure how my mind would react to the LSD, I was relieved to be off the streets. If I freaked out and lost my mind, I thought, the Dike would be a good place for me to be. Unfortunately, freaking out was not a problem. It had been nearly forty-five minutes since we ingested the acid and we were yet to feel its effects.

“I’m gonna kick Mikey’s ass!” Rudy complained. “Five bucks a hit! Five bucks! Fuck! I could have scored some kick-ass weed! When I get my hands on him…”

Suddenly, a silly grin appeared on his face. When our eyes met, I couldn’t help, but smile myself. I wasn’t sure exactly what we were smiling about, but whatever it was, it was hilarious. It was as if somebody switched on a light bulb and illuminated the incandescent spectacle of the moment. The entire world suddenly took on a strange appearance. The sun reflected off the melting snow in complex prisms of color. The sky blanketed us with a blue-orange hue.

At the base of the flood control dike, the mid-afternoon sun rapidly melted the snow. Like a running sore, brown water oozed from the pores of the thawing ground. When we stepped in the mud, we heard a loud sucking sound as our feet were pulled into the gooey earth. We managed to work our feet free of the quicksand-like mud and started ascending the levy. On the other side of the Dike, we headed towards the frozen waters of Toby’s Creek. The harsh winter made the area surrounding the water look like lifeless and barren, post-apocalyptic wasteland. As we neared the moving water, we saw vast sheets of ice, glistening shiny and wet in the afternoon sun. The thawing ice creaked and moaned with each one of our cautious steps. We moved an inch at a time, not sure whether our next stride would plunge us into the frigid waters of the creek. After several minutes of cautious plodding, the tenuous ice was too much for us to deal with.

“Let’s go somewhere,” requested Rudy. Happy to get off the ice, I readily agreed. With no particular destination in mind, we started walking. We left the confines of the Dike and began hiking up steep hilly streets towards the tiny town of Pringle. From the hills of Pringle, you could see the entire industrial valley of my hometown. The white houses and slate rooftops looked like the plastic model buildings I put on my train platform every Christmas season.

“Everything looks so small from up here.” I commented to Rudy.

“I wish Godzilla would come along and crush the fucking place,” he added.

It was then we approached a dingy wooden grocery store, called “Pops’ Store.”

I stood frozen like a deer caught in early morning headlights. The way I was feeling, the way the world was unraveling before my eyes, I was not sure whether I could deal with human interaction.

“Come on, man. It’s cool.” Rudy tried to reassure me as he headed towards the store entrance. Not wanting to stand on the street alone, I begrudgingly followed him. When we passed through the door, we stepped back into the past, into a strange time warp, back some thirty years into the bland 1950’s. The creosote coated wooden floor, creaked loudly with our steps. Because the store was perched on the side of the hill, the floor seemed slanted. Everything appeared to be tilted at a slight angle. He approached a large glass counter and carefully studied the assortment of penny candy. Standing behind the counter, an old man who we figured to be “Pops,” stared at the glowing black and white screen of a portable television.

“I, Ronald Wilson Reagan, do solemnly swear,” we heard muffled from the tiny television. Pops turned down the volume when he noticed Rudy standing at the counter.

“What can I do you boys for?” Pops asked.

Pops pulled a shiny white and green pack of Kool cigarettes from a large overhead rack. He looked at the television, then smiled broadly, showing off his yellowing dentures.

“It’s a great day for America, boys. You mark my words. Ronnie Reagan will set us straight. He won’t take no shit from them towel headed, I-ranians.”

Rudy and I suddenly looked at each other and burst out in loud, uncontrollable laughter.

Before the cigarette transaction could be completed, we darted towards the door.

“Where you going? Pops wondered. “What about your cigarettes?”

Laughing uproariously, we exited the store and began walking back down the hill at a fast pace.

“Pops had a radial tire on his head and I swear it was melting!” he said between laughs.

As we reached the more level and familiar territory of our hometown, something even more strange began to happen. One by one, people began exiting their houses. They cheered loudly, some banging metal pots and pans together in apparent celebration. An old woman, with flaming red “Ronald McDonald” hair and caked on make-up that looked as if it was done by a mortician, confronted us on the sidewalk.

“Isn’t it wonderful, boys?” she exclaimed. “The hostages are free!”

Rudy and I looked at each other and began to walk at an even faster pace.

“The sausages are free!”

“That’s what I thought she said.”