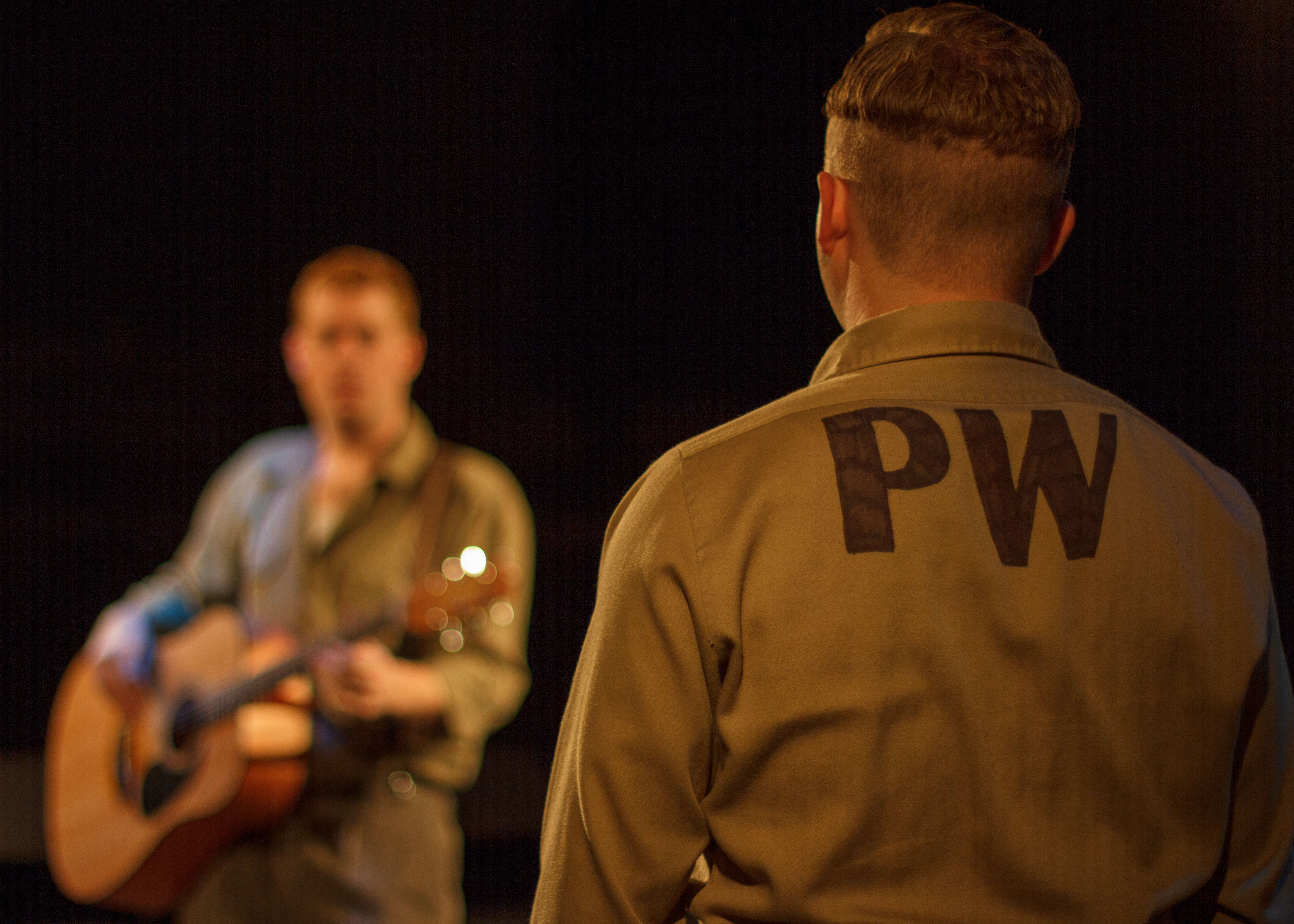 In a year of theatrical productions characterized by a wealth of collaborations between local playwrights and companies, MAP’s production of Vince Delaney’s The Art of Bad Men represents a sort of ideal; the entire endeavor has the feel of familial comfort. To be sure, this isn’t the first time the playwright and this company have worked together (2011’s Three Screams), though it feels as though that familiarity is true for the rest of the company. This comfortable feeling tends to free everyone up to simply explore their roles within a production, whether as an actor, a designer or a director; this is certainly true of Bad Men and the production shines because of it.

This is a fortunate circumstance, for Delaney has taken Screams‘ meditation on how we relate to art and added a simple layer of complex morality for the company to explore. Set in the latter days of World War II, we come upon Gerhardt (Ben Burris) and Kurt (Benjamin McFadden), two Nazi POWs stuck in the American heartland, as they whittle away the wee hours under the snoozing eye of 4F soldier Harvey (Brandon Ryan). In quick strokes, we come to understand that while Gerhardt (a musician in an orchestra sent to provide morale to the troops) has begun doubting the worth of the war his country is embroiled in, Kurt (a bona fide soldier) is still fiercely devoted to his country’s overall mission, still attending Nationalist meetings with other like minded officers, and greatly under the sway of the propaganda that’s been fed to him. The duo is soon joined by Franz (Sean Schroeder), a recently graduated member of the Hitlerjugend, whose naivete stands in contrast with his more experienced bunk-mates.

Given the play’s themes, it might have been desirable to have a central trio that more superficially resembled modern day Americans, but Delaney’s use of Nazis is one of his canniest decisions. Their affiliation makes it easier for the audience to see these characters’ foibles and recognize the hubris they are inadvertently accumulating — for Kurt and Gerhardt are just as naive as Franz, despite what they think, and the three of them are blindly heading down their own paths toward a very rude awakening by the play’s end. A more apt parallel for modern day America would be difficult to nail and too obvious to stomach.

Before the characters reach the end of their individual journeys, they are allowed the room to gain dimensions and become humans in the process: Gerhardt gets to experience American hospitality under Harvey’s lax guardianship and in the process develops a sweet little romance with Cordelia (Grace Carmack), a local farmer’s daughter; Kurt has his loyalty tested many times over, but none present as much of a challenge as the unexpected run in with Emma (Peggy Gannon), an older sibling. Franz, whose arc provides the context for the play’s title, dives into rehearsals for a production of Moliere’s The Miser. It’s in this last detail that the play’s themes fully come into bloom; just how far are we willing to pursue a fantasy in order to escape reality? How much do we use art to justify our country’s questionable behavior? How deep in the sand will our heads be when the time comes to wake up? What will our response be then, do we face the truth or seek easy outs?

All of which makes it sound like Bad Men is a heady slog to get through, which it isn’t. In fact, there’s only one major niggle to be had with this script — it arrives in the middle of the play’s climax, putting too fine a point on the proceedings and giving one of the characters as well as the audience an easy out — discussing it further feels like a bit of a violation toward the proceedings, so it’s probably best to leave it to the audience to discover it for themselves. However, when Delaney is invested in his characters, as he is here, his works become more immediate, more alive — often displaying deep and rich veins of humor both light and dark, as well as an enviable ability to get under the skin.

Of course, Delaney is abetted in delivering this play by the exemplary troupe that MAP — a company with only four productions under its belt, each marked by its ambition — has put together. By turning the diminutive Inscape into an in-the-round space, the design team has come up with several imaginative devices while adding an oh-so-subtle Brecht-ian element to the proceedings. In turn, director Kelly Kitchens — continuing to establish herself as one of our city’s better directors — uses that space well, emphasizing the inherent intimacy and combining it with her actors’ talent to deliver an impressive production.

Truly, the performances here are just as important as all of the above: Carmack is absolutely sweet in portraying Cordelia’s youthful romantic nature; Gannon is heartbreaking in displaying the chasm between Emma and Kurt; Ryan as Harvey helps to deliver many of Bad Men‘s comedic moments, but lands many of the harsher laughs as well; Schroeder quite ably has established himself as a magnetic presence assuming his talents are used properly, as they are here. However, it is the work of Bens Burris and McFadden that carry the bulk of the weight in this production, and it is very rewarding to see them get the opportunity to do so. Burris has never been as charming as he is here, McFadden has never been as deeply embedded in his character, and neither are overbearingly showy about it — these qualities help to give the ending an emotional impact rarely achieved in other settings.

The Art of Bad Men is that rare “traditional” theatrical production that does not shy away from its intelligence, its darker impulses, nor its conflicting emotions. It simply tells its straightforward story while sticking to its convictions. Combined with MAP’s name-your-own-ticket-price policy, Bad Men delivers a pure theatrical experience as refreshing as a breath of fresh air.