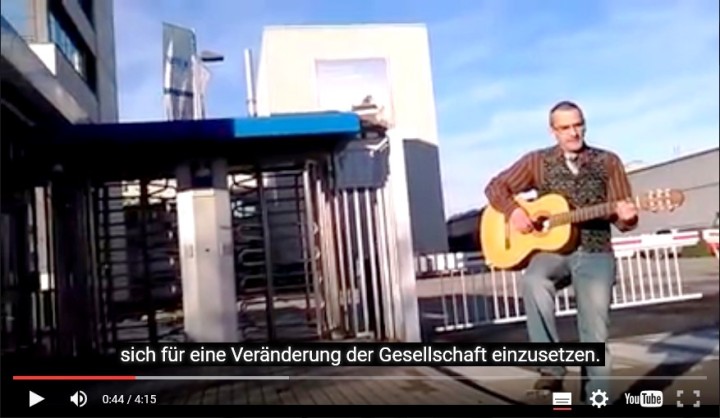 Poetry against Arms is an initiative that pits poetics against the arms industry worlwide. Initiated by Luz Jahnen und Tom Bütikofer, Poetry Against Arms is an open format combination of performance, music, and video. Anybody can participate, in any language and from any country, to present in the most fit way the sure consequences of dealing in the weapons business.

The annual report of the Stockholm International Peace Research Institute (SIPRI) speaks of an overall reduction in arms sales worldwide, but the data is deceptive. Some countries, like Germany and Russia, have intensified their weapons business, as well as other countries like India, Turkey and Brasil. China, which is among the Top5 of the weapon-producing countries, was not included in the study because there was no reliable data. Germany has made headlines because of the latest approval of a deal of Heckler & Koch with Saudi Arabia, despite the promise of foreign minister Gabriel to disallow such exports to countries with problematic human rights situation as the German constitution demands.

“Many people think that they cannot do anything about it. But we must resist,” explains Tom Bütikofer. His motivation for the campaign: “It is unbelievable how much energy and resources worldwide go into the various militaries, while so many people do not have even the minimum needed to exist.”

Away from the discussions

Poetry against Arms consists of a central website where anyone can post a YouTube video together with a description of the activity and where it took place. The idea is to stand outside of arms-producing companies or military facilities and present poetic contributions. This need not be only poetry but can also be music, theatre or dance. “We deliberately did not define that,” says Tom. The founders also request that contributors briefly describe what kind of company it is, what is produced there, what is their sales volume, what is sold to where and so on. “But we leave it up to the people how to do that.” The website appears in four languages but everyone is free to speak in any language in the videos posted.

Tom is convinced by the campaign. He says that, on the logical level, discussions have gone on so very long but have not moved many people. “What I think is exciting, when people start to express their disagreements in a more bizarre way, without always trying to justify intellectually everything, in discussions where most people do not really listen. And I do think that once we get the ball rolling, it will impact the other side.”

Spark of hope against a culture of revenge

Luz Jahnen had the idea for Poetry against Arms after writing his monography – revenge, violence and reconciliation. He became aware of how deeply rooted the mechanism of revenge is in our western culture and yet we have no elements for inner reconciliation and overcoming violence. “For me it was always clear during my writing that our activities must follow from this study. Above that, it is very clear to me that my life needs to serve the cause of overcoming of violence. For many reasons this is the central topic of my life. But how can we fight that organised violence – the military, the financiers – in a way that holds at least the slightest spark of hope?”

“We cannot compete with them,” says Luz, “and we shouldn’t. And it appeared to me, very rational and coherent, to confront the most monstrous things with the most fragile, the most intimate, most personal, most human things that issue from us, the poetic aspect of the human being.”

“It is a try to make a very simple proposal and to look to see if it will spread,” explains Tom. “We are prepared to let us be surprised. We do not make this campaign for us only. Instead, we hope that others will adopt it to make it their campaign too. People that are in the topic – arms opposers or anti-war cultural groups – and that we reach a critical number to make it go viral.”

So far, not many contributions have arrived on the website, most of them from the German-speaking regions, but also from Spain and Argentina. However, the poets are optimistic that now they are in the next phase, where they can launch an international spread of poetry against arms.”