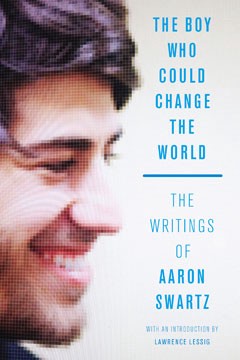 Today marks the three year anniversary of the tragic death of Aaron Swartz. In his time, Aaron was a legendary activist for free speech, free software, and freedom of information, who tirelessly pushed the world to kill the Stop Online Piracy Act.

Now, as I have come to find out through “The Boy Who Could Change the World: The Writings of Aaron Swartz,” published by The New Press, he was also a dreamer and brilliant writer.

This book is a moderate read, with a compiled variety of Aaron’s writings that are arranged thematically, as opposed to chronologically. Some sections are short, while others are very long. There are gentle portions mixed in among intellectually challenging portions. Overall, it took me about eight hours, split over two weekend afternoons, to read its 350 or so pages.

Sometimes there are byzantine gripes over coding and technology culture — things I experienced myself at the same time as Aaron — but this book should not lose any non-technical readers.

For me, reading this book was a revelatory experience. This compilation reminded me of when I read The Autobiography of Martin Luther King, Jr. as a teenager a number of years ago. Unlike Dr. King, I honestly never really knew just deep the brilliance and idealism of Aaron was until I read some of his lesser known and older pieces.

I was particularly floored by his earlier writings. He was eloquent and effective writer, even at fourteen. (Though, he is a bit naive and brash at times.)

Throughout his writing, Aaron ceaselessly and confidently expresses his underlying ideology. At times, Aaron — being a young person throughout — is inconsistent and contradictory. However, at the root of it all, is his unwavering belief in the power of the people — especially the average citizen. He believes in the strength of the little guy. Aaron also prods us to create tools that make the world better for everyone, whether rich or poor.

The most powerful and idea-provoking section — contained in new material introduced by this book — is a lengthy multi-part essay on the way the U.S. Congress works. He carefully, yet humorously, analyzes every single step of our profitable, gridlocked, an intractable political process.

I feel like the world abandoned Aaron in his time of need. I feel like the world — myself included — took Aaron for granted. He intelligently and thoughtfully challenged everything and everyone: software companies, corporations, multimedia conglomerates, governments, and even modern school systems! Yet, in his final challenge — we only stood on the sidelines and rooted for him, waiting for him to win again. Instead, he lost. Then, we lost.

If Aaron had lived even a few decades longer, he really have could have changed the world, far surpassing the ways in which he already has. All is not lost though. With a little faith and a little luck, we still can.

So… what are we going to do?