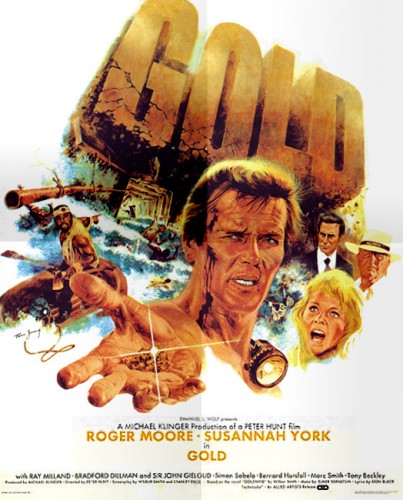 Roger Moore and Susannah York star in this British made romantic thriller set in South Africa. Moore plays a rather unscrupulous womanizer who unwittingly becomes part of a conspiracy to artificially manipulate world gold prices.

Best known as Sean Connery’s replacement in the James Bond series of movies, Roger Moore also starred in the TV version of The Saint. Surprisingly, he is also the guy who famously beat up legendary hell-raiser Lee Marvin while filming Shout At The Devil, produced in 1976. Marvin’s comment on the incident: “The guy is built like granite. Nobody will ever underestimate him again.”

Moore retains his iconic 007 coolness in Gold, but in this movie his character often goes astray in terms of questionable decisions regarding issues of personal morality. Despite the typical Saint/Bond charm and his British style wit, throughout most of the film his character sets a bad example for how people with integrity ought to behave.

Also appearing in Gold are John Gielgud, Ray Milland, Simon Sabela and Bradford Dillman. In my opinion, the movie’s only real hero is actually Sabela’s character “Big King”, since Moore spends most of the film having an indiscreet and illicit affair with his employer’s wife (Susannah York). Born in South Africa, Simon Sabela also contributed choreography for Zulu (1964) and acted in Drums Along The River (1963), Target of An Assassin (1977), Zulu Dawn (1979), The Gods Must Be Crazy (1980), and Shaka Zulu (1986).

The screenplay written by Wilbur Smith and Stanley Price is based on Smith’s novel entitled Gold Mine. The story was inspired by a 1968 Johannesburg mining disaster. The New York Times review of Smith’s book was somewhat caustic and dismissive: “Mr Smith, an adventure writer disdainful of subtleties, blasts his way to a finale strewn with broken bodies and orange blossoms.”

Elmer Bernstein’s theme music for Gold is also reminiscent of some of the Bond soundtracks. It features several overly dramatic songs performed by Jimmy Helms and Maureen McGovern – pure 70’s overproduced pop. The Helms tune sounds very much like a Tom Jones rendition. “Wherever Love Takes Me” composed by Bernstein and sung by McGovern was nominated for an Academy Award.

Although I do not go along with all of the lavish praise heaped upon this movie by the Los Angeles Times, I do agree with one description of the movie which appeared in that newspaper: “It is a travelogue of South Africa and a fascinating audiovisual essay on gold mining.”

There are some amazing scenes featuring traditional tribal dances and honest portrayals of black workers toiling away under terrible conditions for their white bosses. Set locations included the Buffelsonfstein and West Rand gold mines. Some of the action scenes shot underground in the mines near the end of the movie are (dare I say it?) “breathtaking” and were potentially dangerous to the actors. It’s clear that Moore was forced to work for his salary and for his cut of the proceeds on this project.

The film did involve some controversy due to the fact that it was made in South Africa during the bad old days of apartheid. Some scenes were also filmed at the famous Pinewood Studios in the UK where the British actors union ACTT placed a ban on the production because the union’s members were prohibited from working in South Africa.

MGM pulled out of financing this film so Michael Klinger bought back the rights to the movie and the book by Wilbur Smith. Eventually he was able to raise enough money from South African businessmen to produce the film.

Best line: Responding to the mine owner’s offer of a gold construction helmet, Moore refuses it, saying, “It’s gold – I hate the lousy stuff.”

A humorous side note is that Assistant Producer Tony Klinger said he tried to recruit Steven Spielberg to direct Gold, but Roger Moore vetoed the decision, claiming Spielberg was just too young to work on the project. Cinema history has definitely proven Moore wrong on that point…

I suspect it might have been a better movie overall with Spielberg’s direction.