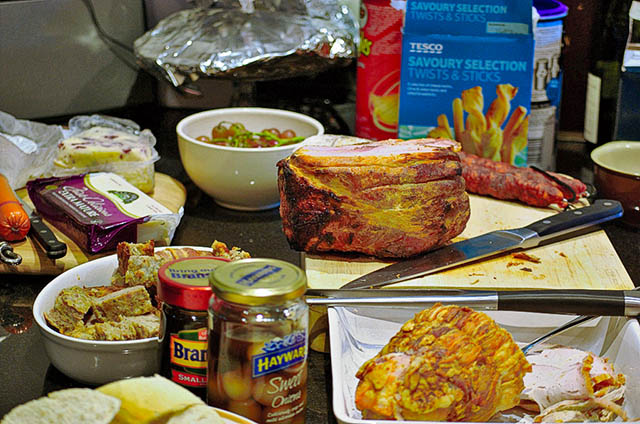 I find it funny how I thought that I would be able to stick to that diet of mine as the holiday season set in. Do you know how good ham is? Do you know how difficult it is to just stare at a glazed ham, with its pineapples and cherries, while your stomach grumbles and rumbles after having been basically starved for the past month? I want me some ham! my digestive system screamed, but I requested that it kindly hush for we were sharing what we were thankful for.

“I’m thankful for my loving family,” said my aunt.

Ironically, she had basically been exiled from the family for stealing the entirety of my grandfather’s fortune when he died, but, according to my dad, it was too soon to boot her out completely. I pitied her slightly, very slightly, but blame fell only on her.

The focus was passed on to my brother. “I am thankful for the creators of Grand Theft Auto,” he joked, “And I’m thankful for my parents who have funded my college career.”

The attention then turned to my baby cousin, who, at the time, was barely six years old. She still liked to shove her fingers in her mouth and hid behind mommy’s leg when meeting new people, but there was obvious wisdom about her. Even at a young age, you just knew that she was special and that she would do something more. She was, eventually, successful, but, back then, she was little more than a pair of curious eyes, an inquisitive mind, and potential.

“What are you thankful for, sweetie?” my other non-exiled aunt asked the girl.

She pulled her pointer finger out of her mouth and wrapped her other hand around it, then she spoke, “I am thankful for mommy and daddy and my doggy and my house and everything about me.”

She went back behind her mother’s leg and shoved her finger back in her mouth. Her words were so quick and simple that everyone else seemed to brush them off as child’s talk, but they’ve stuck in my mind after all these years. Everything about me, the words turned over in my mind, and my mouth wasn’t very quick to move when it was my turn to speak.

I was conflicted at that point. Should I say what I was truly thankful for? There was so much. How would I put it quickly? On the other side, was I to be as sarcastic and humorous as usual? I picked the latter.

“I’m thankful for the ham.”

They all just laughed completely ignorant to the epiphany that I had experienced at the words of a six year old. Everything about me, I thought as I took my first bite of the ham. That was some good ham, and if I’m being honest, I was truly thankful for it that night. As I looked around the room, I saw people who had shaped me even a little bit throughout my entire life: my parents, my siblings, grandparents, my neighbors, family friends, and now my little cousin. Those soft words hit hard, and they really made me think about just what I was thankful for.

I am thankful for my family and my friends. I’m even thankful for that old rag of a horse that was thrown on me oh so many years ago.

“Wait a minute,” I said to myself.

I eyed a bag of baby carrots that my mom had left out after making one of her dishes. In a few discrete movements, I snatched the bag and stole away through the porch door. I marched with purpose across the wet grass to the shedrow just a short way from the house. I opened up the top half of the Dutch door, and, inside my horse stood, undisturbed, munching on the abundance of hay that sat in front of him.

At the sight of me, his ears pricked forward, and he moved away from his meal to greet me.

“Hey boy,” I whispered to him.

My horse was a real nag most of the time. He wasn’t spectacular. He was given to me by my real dad after he left so many years ago. It was his way of making peace with me after walking out, but the animal that I was gifted with had more attitude than a popular girl on a Monday after she hasn’t had her morning dose of Starbucks. To me, he wasn’t mean or nice; he was somewhere in between, but escaped the label of indifferent. I hated him for a long time, and he sat in the field, mostly untouched, for about a year before I finally just took a look at him and decided that something needed to change. I got a trainer, and you’d be surprised how basic his issues were. It was a respect thing, and it required consistency and firmness to fix, but I was determined. I had a lot going on back then between my dad leaving, my mom going through boyfriend after boyfriend, the bankruptcy scares, and, on top of that, I got bullied through all of it, but, no matter how hard my day was, I always looked forward to coming home and working with my horse. He was getting better, so much better. Everything that pulled me down went away when I was working with my horse, and ever since we came to an understanding, he has been my shoulder to cry on for years.

I pushed a carrot between his lips, and he happily took it, but it wasn’t long before he was eager for more. I fed him until the cold started to get to me, then I closed the stall door and made my way back to the house with the empty carrot bag. There’s a lot that I’m thankful for; I’m thankful for everything that makes me who I am. My horse just happens to be a big part of that.

Check out more of T.A Eyo’s stories on Wattpad.