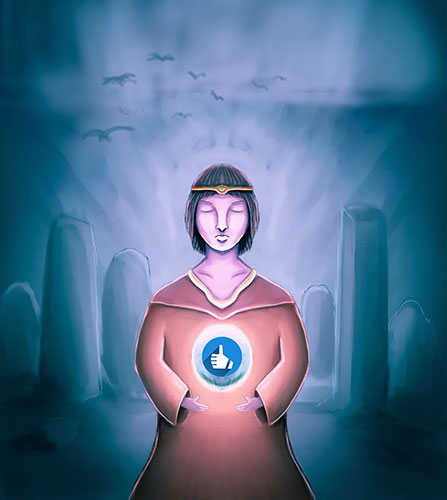 A year ago, when the emotional manipulation paper became a scandal, it became clear that many Facebook users hadn’t before considered how their News Feeds were manipulated; they were inclined to instinctively accept the feed as a natural flow. That seems to reflect consumers’ attitude toward television, where content simply flows from channels and we don’t generally stop to think about the decisions that led to that content being there and how it might have been different. We just immerse in it or change the channel; we don’t try to commandeer the broadcasting tower.

Social media’s advent was supposed to do away with central broadcast towers, but it hasn’t really turned out that way. Instead mass media companies distribute their products through the platforms and consumers’ role is to boost the signal for them. The fact that consumers create content of their own is insignificant; it doesn’t compete with the mass media product.

On Facebook, the entirety of the News Feed flow is the mass-media product, and it is made not by executive producers but by an algorithm.

Will Oremus wrote a history of Facebook’s News Feed algorithm for Slate, which seems to tell the story Facebook wants told about how that algorithm has evolved. (There isn’t, for instance, much discussion of how the News Feed accommodates advertisers, as Nathan Jurgenson points out.) Oremus sets up the specter of omnipotent and autonomous machine-learning-driven algorithms as a straw man that can be blown away by the revelation that well-meaning people actually program them. Get this: “the intelligence behind Facebook’s software is fundamentally human.” Who knew? I thought the algorithms were found inscribed on tablets of gold in Menlo Park.

Much of the rest of the article is a look at the benign wizards at Facebook who try to interpret our behavior and articulate our inarticulate yearnings in the form of a satisfying flow of content. It’s his way of following up on the question he poses about that human intelligence on which the News Feed algorithm is premised, and its logic (or lack thereof): “What if people ‘like’ posts that they don’t really like?” What if engagement is not the same as enjoyment?

Any examination of the logic behind the News Feed has to look at not only how it is designed to hold users’ attention, but why. You would think you would begin with the idea that there are many different kinds of attention and many different shades and purposes behind affirmation. But advertisers don’t subscribe to that affective economy. Any attention is good attention when attention is monetized. Attention is measured in time; it doesn’t have any additional dimensions. It doesn’t matter if you are gaping in horror; you are still paying attention, and that is all that matters. As far as advertisers are concerned, you like what you see, because you will see an ad that is stuck on the thing your eyes are glued to.

So the question is, What sort of attention does Facebook want to cultivate in its users so they fit the world view of the advertisers who fund its existence?

What advertisers demand is one-dimensional attention. Part of what the algorithm achieves is this flattening of attention, by reducing the potential meaning of a like (or a click or a comment or any other behavior that is metricized) into an uncomplicated affirmation, a revealed preference that obviates any ambiguity. This distorts how people are actually liking on the basis of a complex and irreducible set of reasons (the undefinable blend that makes us unique and reflects the unique and ever changing context in which we are consuming media), but when the distortion is fed back into the News Feed, shaping what appears there, it renders those other reasons irrelevant and disincentivizes them. It starts to produce the oversimplification as a simple fact about users’ actual behavior. The algorithm shapes the behavior it purports to reflect. It produces the sort of attention that it factors into its sorting processes. It makes everyone’s likes essentially commensurate at some level of coding. We all like the same.

Oremus rightly points out that the Like button was created to put Facebook users to work at producing Facebook’s programming:

The like button wasn’t just a new way for users to interact on the site. It was a way for Facebook to enlist its users in solving the problem of how best to filter their own news feeds. That users didn’t realize they were doing this was perhaps the most ingenious part. If Facebook had told users they had to rank and review their friends’ posts to help the company determine how many other people should see them, we would have found the process tedious and distracting. Facebook’s news feed algorithm was one of the first to surreptitiously enlist users in personalizing their experience—and influencing everyone else’s.

He places appropriate emphasis on Facebook’s ingenuity in “surreptitiously” putting users to work in this way. But what makes it so ingenious? It is the fact that Facebook could so easily reorient users’ experience of Facebook away from “sharing” and toward ranking. Facebook recognized the gamification potential in our “social graph,” and it had no qualms about exploiting it. Suddenly, the reason to go on Facebook was primarily to register likes, not to enjoy or engage with anything in particular or to keep in touch with friends or whatever the site’s original purpose might have been misunderstood to be. With the Like button, the site found its true purpose. The button was a machine for turning users into workers, and for converting their multifaceted engagement with people in their network and the mediated content of the world into a unidimensional game of attention-boosting.

Facebook tends to represent itself as trying to serve users by fine-tuning its algorithms to give them what they really want, and unfortunately evil content providers figure out how to game those algorithms and ruin it all, forcing Facebook to rejigger the variables to please fickle users. Because algorithms can be gamed, they reorient content producers’ attention and effort toward how to game them rather than to make quality content.

many began to tailor their posts to get as many likes as possible. Social-media consultants sprung up to advise people on how to game Facebook’s algorithm: the right words to use, the right time to post, the right blend of words and pictures. “LIKE THIS,” a feel-good post would implore, and people would do it, even if they didn’t really care that much about the post. It wasn’t long before Facebook users’ feeds began to feel eerily similar: all filled with content that was engineered to go viral, much of it mawkish or patronizing. Drowned out were substance, nuance, sadness, and anything that provoked thought or emotions beyond a simple thumbs-up.

In the narrative Oremus offers, this gaming the system is an unfortunate by-product of Facebook’s benign well-intentioned algorithm. But creating a system to game is the whole point of deploying algorithms; Facebook then becomes the master rulemaker that controls the fates of those who choose to play (Zynga, Upworthy, newspaper publishers, etc.).

So Facebook is not responding to the demands of fickle users who don’t like Upworthy links. Instead Facebook is effectively producing fickle consumers (whose one-dimensional attention span is ever shallower) to drive harder bargains with those who want to sponsor News Feed posts and have them show up more prominently. By design, the algorithm exhausts us on successful content types and renders them boring, redundant, overexposed. The newsfeed algorithm destroys organic reach so that Facebook can sell reach in the form of sponsored posts.

The eradication of “substance, nuance, sadness, and anything that provoked thought“ from News Feed content is the prerequisite to make ads acceptable as content there. It is not an unfortunate unintended consequence; it is the premise that makes News Feed work as it is supposed to, as an ad conduit. The algorithm is there to make the News Feed into commercial broadcast television and to guarantee a suitably passive audience for it. Like TV has long done, they’re just giving the people what they want.

Written for The New Inquiry.