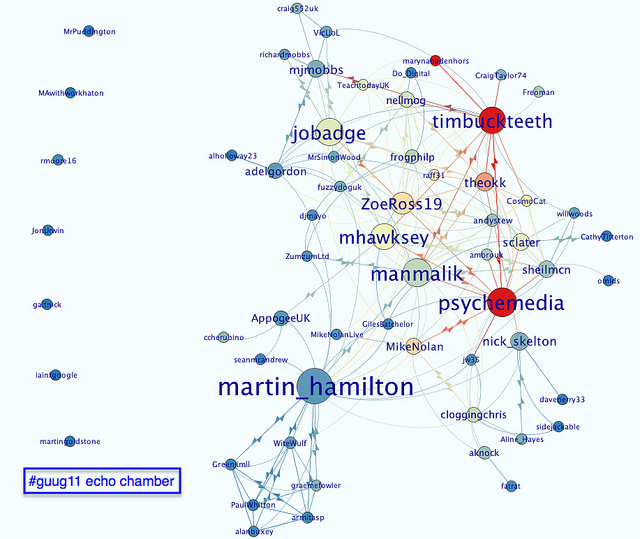 Last week, my friend Tin wrote about being intentional about who was in his networks. His thoughts got me thinking about not only who is in my own network, but also what, and how to widen both.

In lots of ways, this is actually the opposite of what many social networks and platforms are trying to do, and this worries me greatly. “You might also like…”, or “Recommended for you” features point us towards things that we’ll like because they are similar to us, rather than things that will make us think.

But here’s the thing: I’m okay with disagreeing with things I see online. More than that even; I want to see things I disagree with online. Eloquent arguments by someone with a vastly different perspective to my own are exactly what I need to be able to challenge my own thinking and, if necessary, revise my own opinions.

Contradictorily though, while more and more people from all corners of the world are getting online, it feels like getting those diverse perspectives and voices on my screen is getting harder and harder to do. Astra Taylor’s book The People’s Platform explores this phenomenon:

While the Internet offers marginalized groups powerful and potentially world-changing opportunities to meet and act together, new technologies also magnify inequality, reinforcing elements of the old order. Networks do not eradicate power: they distribute it in different ways, shuffling hierarchies and producing new mechanisms of exclusion.

Taylor describes the trend towards “homophily” — our tendency to associate with and bond with others similar to ourselves — and how this is affecting our digital behaviour, and her book, (which I strongly recommend) explores these themes of diversity and power in social platforms in far more detail.

It’s not hard to think of many examples, either, both online and offline. The one that I thought of most though that has taken off largely since Taylor’s book came out in 2014, is that of Medium. In the words of a recent BBC article about the platform, “Medium has become an outlet for people who already have the biggest audiences in the world.” I don’t agree with everything in that article, but the latter half of it goes on to a topic I do agree with: “Medium can sometimes seem the least likely place to be confronted with a view different to your own.”

Somewhat ironically, after spending 6 years in prison from 2008–2014, Hossein Derakhshan wrote about the phenomena of centralization of the web, and of information online, actually in a Medium publication.

So what I’m saying isn’t new. We know that what we’re reading and the information we’re getting online is becoming increasingly homogenous, increasingly intentionally designed to please us, and — in my opinion — increasingly boring, in a lot of ways.

But more practically speaking, it got me thinking about what we can do to counter that algorithmically-induced homophily. I wrote about the beginnings of my own attempts to do so, back in 2014 — but here are some more up-to-date tactics I’ve been trying out.

I think I’m a bit slow to the party, but I love newsletters. People who have other interests to me and who are good at curating that information online have been a regular source of interestingness for me. People who go beyond the “most popular” parts of sites, and dig down to find hidden gems among the overwhelming mass of information on the Internet, have my utmost respect and gratitude. In this age of outsourcing curation to machines, hand-picked morsels — often on topics I wouldn’t otherwise read (so, would probably not get recommended) are teaching me a lot. If it’s not too meta, this Buzzfeed piece of interesting newsletters has some great recommendations in there.

Another tactic has been following people on Twitter who have absolutely nothing in common with me, and those who display a totally different opinion to my own. I don’t get into conversation with them online very often at all, but it’s fascinating to see what kinds of information sources they follow, who they interact with, and the kinds of things they find interesting.

One go-to website for differing perspectives on the world has been Global Voices. Disclaimer: I’ve written for them, but I followed the site way before I started writing, and actually the more I learn about their community, the more I respect them. They provide a platform for citizen journalists to write about issues that aren’t getting covered in “mainstream” media, and there are all sorts of issues that are changing the world in places I know so little about, that get covered regularly. It’s fascinating, if not a little overwhelming when I think about all I have to learn.

Given that it’s becoming easier to simply go with the algorithmic flow, fighting against these trends is going to require intention and effort from all of us. In my opinion, a first step that we can all take is being more intentional about what, who, and where we get our information. These trends will harm people on the margins of society the most, and it’s all of our responsibilities to reach out and make an actual effort to hear them.