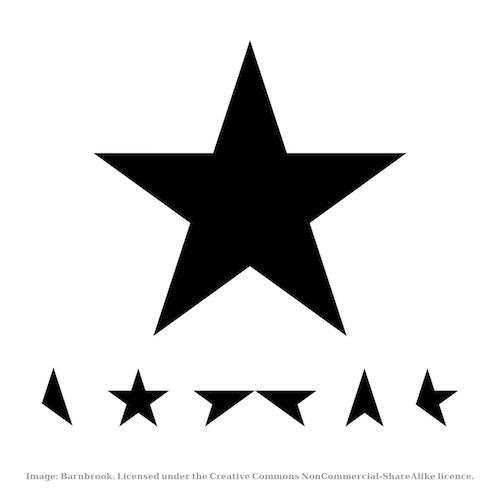 Jonathan Barnbrook is a world-renowned artist who has worked extensively in a variety of media including film, typography, and graphic design. He was also a close collaborator of David Bowie, and created the cover artwork for the musician’s last four albums. Sadly, Bowie died in January, just two days after the release of his final studio album, Blackstar (aka ★). The record, which has gone on to become a commercial and critical hit, was intended by Bowie to be a “parting gift” to fans.

As an homage to his friend and creative collaborator, Barnbrook decided to take the “gift” concept to the next level. He released the artwork for Blackstar under a Creative Commons BY-NC-SA license, so that it could be shared and remixed noncommercially by Bowie fans around the world.

We recently had the opportunity to talk to Barnbrook about choosing to make the Blackstar art available in this fashion. It was great to hear how much the notions of tribute and gratitude played into his decision to use a CC license for this project.

What inspired you to offer the Blackstar art to the public for reuse and remix?

I felt a public, more “official” gesture was needed to empathize with the grief many people were suffering [as a result of David Bowie’s death]. I had seen a lot of tattoos and use of the artwork, so I wanted to give these people something to remember David by without them thinking they were using the artwork illegally or secretly in some way. I was as upset as they were, so the artwork was released in the positive spirit of sharing and understanding what they were going through.

People belittle collective public grief, which is a bit silly because a person can be the conduit of an ideology or philosophy of an age. I think [the grief] has been so enormous for David because he represented being who you wanted to be in a society where people are often not given the chance to do that. He gave hope and expression to many who didn’t fit in or who were not where they quite wanted to be, so when he was gone it was understandable that people felt a great sense of loss.

I also feel that music is very underrated in terms of importance in people’s lives. In an immediate sense it doesn’t help a war situation or save someone’s life, but it is very life affirming. It can help you through depression, express the moments of absolute joy, be a symbol of an age or philosophy. So again, it is understandable that you’d grieve when the person who expressed these things for you in the intangible form of music is no longer there to be part of your life.

I always felt that it was an incredible responsibility and privilege whenever I worked on David’s covers. So I understood that this would be an appropriate thing to do.

Why did you specifically choose a Creative Commons license to encourage people to share and remix the artwork?

It is a very well-thought-out, simple system that everybody knows and can understand. The licenses can be read in depth or understood simply on the website. It made it clear that people could use it in the way they wanted without affecting the commercial aspect of the album sales.

Was releasing the art in this way something you’d considered doing before Bowie’s death?

I talked about this with David before he died and he thought it was a great idea, although I couldn’t have imagined the sad circumstances under which I would eventually do it. It came from when the album The Next Day came out—the fans took the white square on the cover and used it in their own way. It was something which I didn’t calculate but it made me extremely happy that they wanted to use, respond, and be part of it too. I felt this needed to be thought of at a fundamental level for the release of Blackstar, that the old model of a record company releasing the record and copyrighting everything so fans could not react or add their own interpretation was wrong. It shouldn’t be such a one-sided experience and instead should show respect and understanding for those people who love the music. The music is still the property of the record company and that is not affected, this just means that people can have their own identification with the release and what Bowie meant to them. When he died I felt that it was even more important that we should do this, especially since a lot of people had specifically asked me for the artwork without any intention of making money from it.

Since I released the artwork I have received so many lovely messages thanking me for it and saying what it means to be able to use the artwork to remember David by. Really it has brought a tear to my eye each time I have read them.

Have you seen any interesting uses or remixes of the art yet?

People are incorporating the Ziggy Stardust stripe in with it, which I think is great. That is an amazing graphic and to feel that the Blackstar [art] is of equal meaning is an honor.

How an artist has affected your life is an intensely personal, unique experience. One of the reasons that we used the Creative Commons license allowing derivatives was because of this. It is important that people interpret [art] in their own way and that they feel free to do it. It is not something that should be dictated by me—I just created one of the components to do it.

And what kind of things do you hope people do with the art?

Quite simply: show their love and appreciation of David Bowie.

How did you first learn about Creative Commons licenses?

It has always been on my radar. It was one of the first prominent models of sharing creativity in a way that didn’t fit in with the existing models of “commercial or not commercial” for artworks. There needs to be a room to share which is above and beyond what is monetary value. Humanity is not built on money—it is built on the meaningful exchange between people.

How have openness and sharing influenced your work and creative process generally?

I think it has been fundamental to it. In addition to working in music, [my creative studio] has done a lot of activist work—and that is about ideas. The spreading of those ideas is fundamental to their success. We have made a lot of them free for people to use and we will be shortly be using Creative Commons again for artworks on our new website soon.