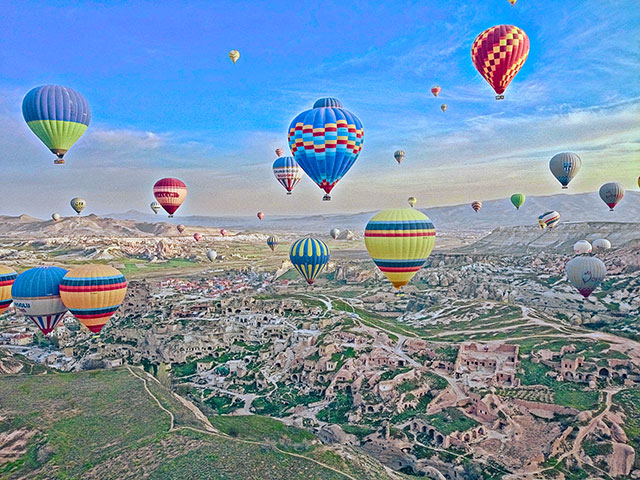 I have lived in Istanbul for almost a year now, and I have still not found the place called Turkey. I arrived with two suitcases and eyes shining in search of Turkey, glittering under its bright red flag, bordered snugly by Syria, Azerbaijan, Georgia, Iraq and Iran. I searched for a place held together by some sort of defining unity and found a dizzying multiplicity instead, an unending number of ‘Turkeys’.

There is the Turkey of Taksim Square and Istiklal Street, the overwhelming crush of people, of languages shouted above the din of the crowd, of street vendors vying for attention on all sides, of cigarette smoke that lingers in the clothing of even non-smokers for days. This is a Turkey that quickens your pulse and teaches you to avoid eye contact while still being acutely aware.

There is the Turkey of Cihangir and Sishane, of tiny cafes tucked into cobblestone walls, of achingly beautiful Greek and Armenian architecture. In this Turkey I have sipped steaming, frothy glasses of sahlep in the rain, spent hot summer nights tripping down alleys filled with bars, languidly energized by cold gin and tonics. I have spent hours perusing bookstores, practicing my Turkish with anyone patient enough to assist me, falling in love with corners of Istanbul I may never find again.

There is a Turkey in which the azan ripples over brightly colored neighborhoods that wake up to pray before starting their day. This Turkey guards its sacred places and identities with wary eyes, watchful in the particular style of those who foresee an attack on what they hold dear. This is a Turkey that would prefer the eradication of the miniskirts and tekels found in many of the other Turkeys, to say the least.

There is the Turkey of Kadikoy and Moda, with their easy-going, socialist vibes and quirky art shops snuggled beside each other on streets perpetually crowded with the young and the politically passionate.

There is the Turkey of Anatolian villages, a Turkey that regrettably remains a complete mystery to me.

Then there is the Turkey of international media. This Turkey grabs you by the throat and draws blood, shows you government corruption and PKK attacks, ISIS safe houses and policemen teargassing young protesters. In this Turkey, a group of men have decided that the Islam that has existed in these lands for thousands of years is not Islamic enough, and seek not to rewrite history but to erase it entirely. In this Turkey, there are cities swelled to three times their original size with people escaping violence across the increasingly porous border. This is a Turkey that is reaching its breaking point, and the reason that most of my family members think I’ve taken leave of my sanity by choosing to live here.

And there are more, thousands more, as many Turkeys as there are people living within its borders. So when my family at home asks, “What is it like living in Turkey?” I do not know how to answer. “Which one?” I want to ask, but I don’t.

“It’s beautiful,” I say. But that is never enough.

“What about mosques? What about extremism, ISIS brides, bombings? Don’t you feel threatened?”

I swallow hard, and defend my new home as I always do – by using the Turkey of bars and nightclubs as a shield. I tell stories of nights spent in hipster cafes, of bookstores with large English sections and Nazim Hikmet proudly displayed in the window. Of veiled women with tattoos, of the alcohol-fueled, one-night-stand adventures of friends. I speak only of secular Turkey, because otherwise I cannot protect the Turkey that lives somewhere behind my ribcage. And yet every time I use this Turkey as a defense, I am uneasy. I have been dishonest to the other Turkeys, made the complex simple and palatable in order to protect what is under attack.

I am afraid of the implications of this, of using the familiar to shield the unfamiliar. Why is it, when we easily recognize the complexity of our own societies, that we cannot seem to assume that this same complexity exists elsewhere? And what does it mean to then defend the complex by making it simple, to aid a process of generalization that I fundamentally disagree with?

This is to say nothing of the political implications of these conversations. In a time of “refugee crisis” hysteria, viral ISIL beheading videos, and Donald Trump, the stakes have never been higher regarding the conversations westerners have about the Middle East. Words are immeasurably powerful, and no matter how well-intentioned it might be, there is something distinctly imperialist about “justifying” Turkey through the presence of supposedly western institutions and social norms. It tacitly accepts the listener’s assumption that Turkey is a strange and potentially dangerous place, and inherently cements the notion that what is western = what is good.

Perhaps the most common defense of places and people perceived to be foreign is the “they’re just like us!” narrative. It has become the rallying cry of peace activists, immigrant rights groups and progressive politicians throughout the western world, yet it is a gilded trap. This narrative comes from the logic that, if persecution comes from the fear of otherness, then the answer is to deny otherness. Put simply, if everyone is the same, no one gets persecuted. And while I do believe that there are generally more similarities than differences between apparently separate groups of people, is it really a good thing that we rely on proving the worth of other places and other lives by pointing out how similar they are to our own? We should not see value only in things that we recognize as familiar or comfortable – it is narcissism and xenophobia taken to a dangerous level.

With this in mind, I tell myself that next time I will be honest, tell the truth of every Turkey I know, give the answers that people do not want to hear regardless of how it will affect their perceptions of my new home.

“So, what is it like being a woman in Turkey?” asks a relative of mine, a well-intentioned and very liberal woman. I feel my pulse quicken and my chest tighten, as usual. “It’s the same as it is here,” I say, choking slightly on the notion that the US is some sort of utopia for the feminine kind. I begin to tell a story about a queer bar in Cihangir.

Janine Rich wrote this for Open Democracy. Ms. Rich is a writer by day and a scholar by night with a BA in Middle Eastern studies and International Relations. She currently lives in Istanbul with a very dramatic fish. Find her on Twitter @OyVeyYani.