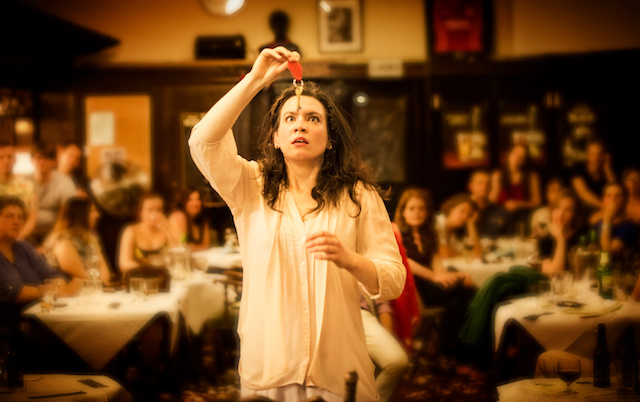 How to defeat the impermeable Devil? How to escape a perfectly constructed Hell?

The Strange Undoing of Prudencia Hart finds our titular heroine, a mousy academic, unpopular and under-admired at a convention of folklorists in a tiny Scottish border town. Her colleagues find her unfashionably traditional and couldn’t care less about the “topography of Hell” that she has divined from a lifetime of study on Scottish ballads and laments. She’s lonely, unloved, far from home and drunk as a skunk when she wanders into the snow at midnight, looking for her Bed & Breakfast.

But who is this strange man with the icy eyes inviting her in from the cold?

What follows is a fairy tale so classically built and elegantly executed that it really is a must-see for writers and readers of all stripes and sizes.

Prudencia is staged in a tavern-esque events space in a format we’ll call “lightly interactive”. There’s a little bit of audience pranking (with an emphasis on the young and beautiful) but you’re explicitly discouraged from getting up and moving around by the greeter at the door. You’re supposed to drink during the show, but you can’t get a new drink in the middle – you get the idea.

Also they hand out tea sandwiches at intermission which was just so freaking classy I wanted to hug somebody.

Props, lights, and audio are engaged minimally but effectively. The performers sing sweetly in harmony (though I’ll confess I missed all the lyrics – let’s blame it on the room’s overly live walls). These people are pros.

So when the weathered and unflappable Devil explains patiently to Prudencia that she’s trapped forever in her own personal Hell I found it impossible to imagine her escape. Neither fighting, cajoling, flailing nor running will set Prudencia free. In fact his evil seemed perfectly perfect.

And here we have the primary problem that all writers face when dramatizing Satan: how can our hero do battle with a category?

Greig finds his answer by attacking the architecture of his own story. Without giving too much away, things get a little meta for a second there, and I found myself thinking about the fact that I was at a show for just the briefest of moments. It was a somewhat unwelcome flash of alienation in the midst of an otherwise absorbing play-going experience.

But nobody else seemed to mind as the actors rolled confidently through their raucous and lively performance. You don’t have to love folklore to love The Strange Undoing of Prudencia Hart, but it helps.