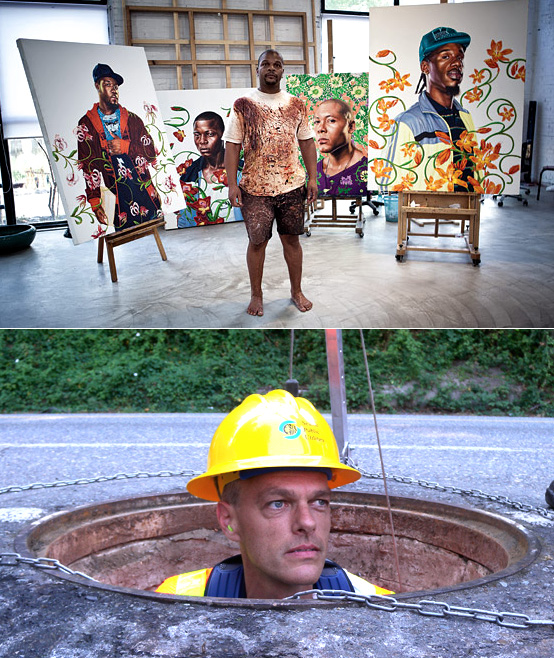 “What I love about bus drivers is that we never talked about driving.”

–- Stokley Towles, as interviewed by the Seattle Weekly

If you have liked my previous entries at the Star, or follow my blog at all, you’re going to love these two shows — both of which are about to close. Although Stokley Towles and Kehinde Wiley may be offering quite different work, they both articulate attitudes and outlooks which represent fundamental pillars upon which my writing is built. One man shares stories of life and work (in this case, the work of bus driving) with a loving attention to humor and detail; the other offers images which recontextualize African-American culture (specifically contemporary male youth culture) as a celebratory, non-confrontational, and much needed addition to the great lineage of Western art.

Towles understands the intrinsic appeal of unusual work environments and is able to tap into the human-interest element of something as specific as bus driving. I saw a performance of his once on wastewater treatment, and he made the subject riveting and hilarious. He takes a journalistic and anthropological focus to what he calls municipal systems — the networks which form the infrastructure of day-to-day civic life, and which often remain invisible to us, who rely on those structures constantly. He makes the world of bus driving relatable, funny, thought-provoking, and ultimately life-affirming. Buy tickets here for Towles’ remaining performances, which actually take place on a (stationary) Metro bus and are based on his own heavy research (some of which was conducted with yours truly!). My blog is the experience of only one operator; his lecture is an amalgamation of dozens.

He recognizes the universality of human experience and taps into what we’re really all looking for– some form of connection, acknowledgment, affirmation of existence. The closing lines are a thing of beauty. As a performer, he manages to be precise and lively concurrently, without apparent detriment to either, organically flowing and yet meticulously rehearsed down to the motion: no placeholding “um”s or “uh”s here. The spoken word is an art, and Towles is a master.

​I should also add that his is the first artistic treatment of bus driving I’ve encountered given by a non-bus driver that I can call completely accurate.

On my blog, I often find myself particularly drawn to sharing stories of young black men behaving kindly or politely — right back to the very first interaction which started it all. These actions are often pretty banal (the most recent one being literally nothing more than five men saying hello while paying fare), and on my bus, they happen all the time. For every story I share here, there are five more like it.

I imagine for the same reason that Kehinde Wiley paints his paintings: to address a void. There is a reductive one-dimensionality to how young black men are portrayed– in history, by news media, by film and television directors, and sometimes by themselves: life, to art, and back to life. It’s absurd to imagine that all these men are hard, emotionless thugs all the time, and yet that’s what we’re asked to believe by a variety of sources. I wish to offer counterexamples of this, that a more dimensional picture might be realized.

The “banal” interactions I share here are interesting to me because they’re not so much banal as underrepresented, and though they may be ordinary in the day-to-day swirl of contemporary life, there are not many opportunities to read or watch such moments. (Here are two more: one involving chicken, the other the Dalai Lama). I hope my writing can function as a small corrective, a concrete reminder of the fully dimensional beauty of character present in folks of all stripes.

To quote the Seattle Art Museum materials: “[Wiley’s] work posits street culture, black masculinity, and the aesthetics of hip hop as constructs that obscure the complexity and subjectivity of human identity.” [emphasis mine]

Wiley himself writes, “the history of painting by and large has pictured very few black and brown people, and in particular very few black men. My interest is in countering that absence.”

In his work Wiley both identifies a problem and presents a solution in the same breath, and does so not with anger, though that would be justified, but with humor, confidence, and a vast appreciation of art history. Portraiture was once the sole purview of royalty and aristocracy, and Wiley recasts paintings of King Philip II and Napoleon with gentlemen he’s found on the street, reenacting paintings they’ve chosen with Wiley in poses of their choosing. It’s comparable to the scandal Gustave Courbet caused in 1849 with his ridiculously, awe-inspiringly massive A Burial At Ornans, depicting not splendour but a peasant funeral, except here the issue is race rather than class.​

To see Wiley offer his own take on Memling’s Portrait of a Man With a Coin of Emperor Nero is a particular delight for me, having just seen the original at the very first Hans Memling retrospective in Rome [Memling was doing something vaguely similar himself, with those repetitive but oddly compelling portraits of the up-and-coming merchant class, who because of their lower status had never been painted before — NV]. Also interesting for me is the ideological takeaway of some reinterpretations of propaganda posters from the Chairman Mao era: we’re accustomed to falsely negative stereotypes of black men being used to maintain a repressive status quo; Mao’s propaganda relied on falsely positive stereotypes to do the same, in an even more brutal environment.

In all, Wiley’s portraits are a valuable contribution, being refreshingly steeped in the context less of history than of art. He avoids sexualizing black bodies by leaving everyone clothed, and brings out the feminine with his intricate floral patterns and subversive choices of expression and pose (seriously, how often do you really see portraits of men lying down?). He has a clear passion for Western art history, and has something valuable to contribute; the attitude and intricacy with which he does is not just important, or admirable, but downright enjoyable.

Stokley Towles’ Behind the Wheel: Life on the Metro Bus ends May 7.
SAM’s Kehinde Wiley exhibit closes May 8