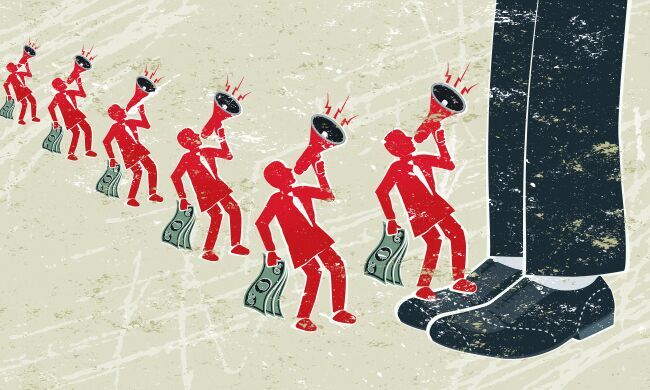 Election reform advocates are closely watching Seattle to see whether it becomes a viable model for getting big money out of local politics. Last year the city approved a “democracy vouchers” program, which will publicly fund local candidates through small donors, requiring limits on campaign spending.

Starting in 2017, all registered voters will receive $100 in vouchers from the city government to spend in $25 parcels on their preferred candidates for city office.

Since then, two states—Washington and South Dakota—are putting similar programs on this fall’s ballot. Other local governments are considering donor matching programs, in which donations are paired with an extra chunk of public money, much the way New York City has practiced for nearly 30 years.

While their methods may differ, local movements like these share the common goal of cutting big-money influence in elections in a post-Citizens United America. If they are successful, the power of the small donor may overtake that of the super PAC.

In the wake of the Watergate scandal in the 1970s, when public interest in government accountability was high, the federal government and a handful of states adopted public-financing systems in which public money would match campaign donations 1-1 or would be issued to candidates in a grant system. But these programs eventually fell into disuse because taking public money required a candidate to adhere to spending limits, which became unrealistic as campaign costs skyrocketed.

New York City is considered the leader of the modern public-financing movement with the system it adopted in 1988.

This is now known as a “supermatch system,” and has since been adopted by Los Angeles and, most recently, Montgomery County, Maryland, located in the Washington, D.C., metro area.

Studies show that in New York City, the supermatch system improved both participation and diversity, according to the Brennan Center for Justice. City Council candidates receive donations from a wider geographic area and more ethnically diverse neighborhoods than before, said Brent Ferguson, attorney at the Brennan Center’s Democracy program.

The supermatch system has remained popular even after the 2010 Citizens United Supreme Court decision lifted caps on donor spending and paved the way for the creation of big-money super PACs, Ferguson said. More than half of New York City candidates still opt in to the supermatch system, running successful campaigns.

In 2013, individual contributions to city-race campaigns were 93 percent, while New York state races—which do not use such a system—saw nearly 70 percent of donations come from special-interest groups.

“When candidates do not have to spend inordinate amounts of time soliciting funds from big donors, they have less incentive to use their power to protect the interests of those donors. Instead, they can focus on the concerns of their constituents, who are also now their funders,” reads a 2013 Brennan Center column co-written by Ferguson. “The city system’s success confirms what common sense tells us.”

A statewide campaign is now afoot to persuade the Legislature to pass a similar program, along with a package of other voter access and ethics reforms.

In 2008, Washington state overturned its ban on public financing, and small-donor supporters began to kick around the idea of implementing a donor matching system in Seattle. The economic crisis at the time put the movement on hold, but four years later the Seattle City Council expressed interest in moving to a public-match system in a letter to the local elections board.

“That was an opening we didn’t have previously,” says Estevan Munoz-Howard, a volunteer on the executive committee of the group that became Honest Elections Seattle by 2015.

A 2013 ballot measure to enact a supermatch program narrowly failed. Even with little time and money to publicize the issue, the proposal netted 49.63 percent of the vote, only 1,400 votes short of a win.

That showed that even without a robust campaign, there was broad support for campaign finance reform. “We felt that was the best poll we possibly could have done,” Munoz-Howard said of the vote. The day after the election, local and national organizations offered support for another campaign.

Proponents regrouped to consider a wider range of public-financing options and eventually to consider the idea of the voucher system.

The idea they settled on was “democracy vouchers.” Each adult resident eligible to vote would receive four $25 vouchers to donate to candidates of their choice in citywide elections. The advantage: Everyone gets to donate—even those who don’t have $25 of their own to give.

The initiative was led by Alan Durning of the Sightline Institute, a nonprofit think tank focused on social justice and environmental issues, and local and national partners such as the League of Women Voters, One America, and Fix Democracy First.

“We felt it would be the most egalitarian, the most empowering option,” said Durning.

And Munoz-Howard agrees. “Everybody would have the opportunity to be at least a $100 donor.”

Its second time on the ballot the initiative was a huge success, with 63 percent of the vote. Seattle became the first city to adopt such a program (its website launched this month).

In January, all registered voters will receive their vouchers.

Following Seattle’s lead, Washington state and South Dakota are considering voucher systems, along with a series of anticorruption reforms. The campaigns in both states are backed by politicians from either major party.

Represent.Us, a grassroots anticorruption organization, supports both measures in both states. “A huge segment of the population feels they don’t have the money sufficient enough to contribute to politics,” said Josh Silver. And though the group supports any measure that cuts down on big-money influence and works to include more voices in campaigns, Silver says vouchers are “inherently more inclusive.”

The spread of public funding

Across the country from Seattle is Miami-Dade County, Florida. Voters there are fighting to put an initiative on the fall ballot that would update Miami’s donor matching system and propose more stringent campaign contribution limits.

On Aug. 2, activists delivered more than 127,000 petition signatures in support of the initiative in two U-Haul trucks to county officials. But there’s been little movement to officially count and verify the signatures.

Officials are required to order a count within 30 days, but the county commission is on summer recess, so the authority falls to Mayor Carlos Gimenez, who is reportedly disputing it; activists are accusing him of negligence.

Accountable Miami-Dade, the coalition championing the ballot measure, has filed a lawsuit against the county to compel a count of the signatures.

Today, through city council bills, ballot initiatives, or appeals to state lawmakers, activists across the country are pushing for either public-matching or voucher systems to replace super PACs and the influence of wealthy bankrollers. Other jurisdictions are considering an expansion of existing public-donor programs.

Howard County, Maryland, is one area that might see a match system, as is Las Cruces, New Mexico.

“Once you start doing it, momentum builds.”