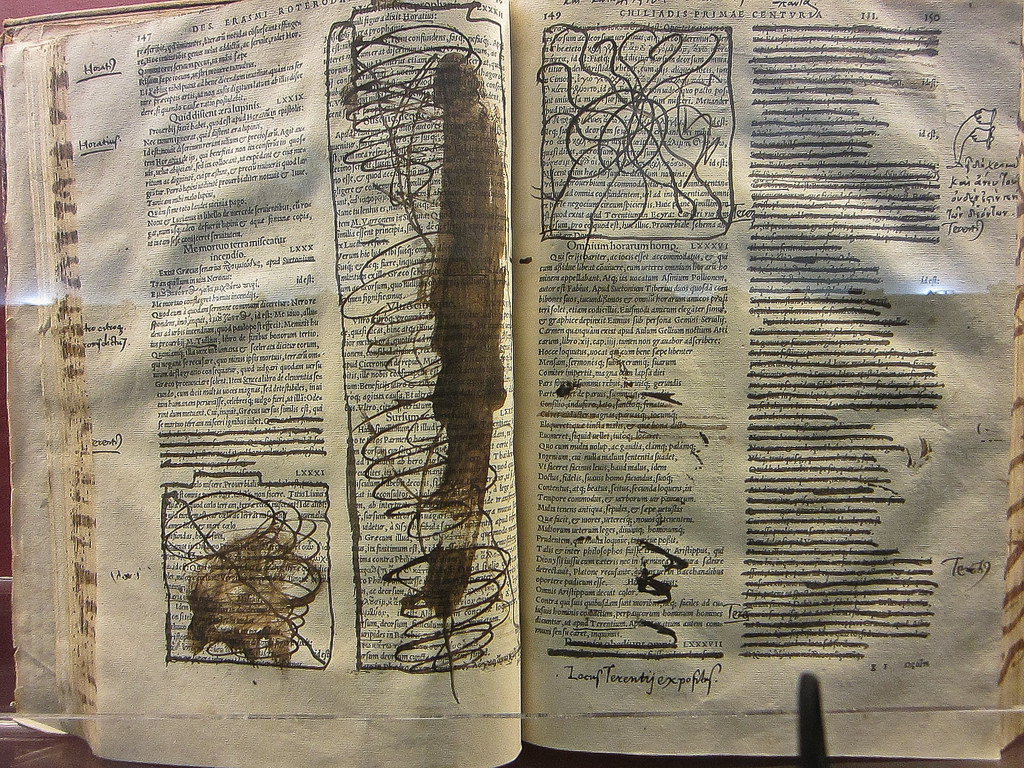 My senior year in college, I took a class dissecting F. Scott Fitzgerald’s The Great Gatsby. I bought the required edition of the book through the Central Washington University online bookstore. I selected a used copy as it listed for three dollars cheaper than the new one. The particular book that was delivered to me was roughly dog-eared and heavily annotated. Mostly the notes were definitions of unknown terms. Apparently the previous college-age book owner did not know what chiffon was. That’s fine, college is a place to expand boundaries and learn about new fabrics. However, one small repetitive mark, present through the entire book, nagged at me: all mentions of “God” had been blackened out.

My mother said she grew up Baptist. She was born and raised in Orange County, California during the 1960’s and 70’s. She told me a story about her and her cousins skipping out on church every Sunday morning to visit Disneyland. Tony Orlando and Dawn played at the Tomorrowland Stage and my mom, as a teenager, would get popcorn and Cokes while she watched. The only time I’ve ever seen my mother act on any religious belief is during funerals.

My father claims to be a Buddhist. He’s an overweight ex-surfer turned computer guru in the Pacific Northwest. That’s about as Buddhist as you can get without actually believing in anything. I think he claimed the eastern religion to escape the bullshit of family politics in his Mormon heritage. Though not connected to any religion he ever claimed, my father does keeps a copy of the Bhagavad Gita. He swears he was gifted the book from George Harrison of the Beatles at the Honolulu Airport. I cannot confirm nor deny these allegations.

In my home, when I was a kid, we celebrated Christmas but without the entire Christ thing. Easter was about bunnies and eggs. On Ash Wednesday, I wondered why kids forgot to wash their faces. I was never made to attend church. I thought it was strange when I would sleep over at someone’s house and they would pray at dinner.

It is important to understand that I am a middle-aged white man living the Nordic-Lutheran-dominated Northwest. So when I discuss God in my upbringing, I mean the Judeo-Christian version of God. Not to say that I haven’t looked into other belief systems. (Gia, Krishna, Bodhi, etc., could all be substituted to fit your own narrative if you’d like.) For the benefit of brevity and to not enter into a major comparative-religions debate, I’m staying with my introduction to a higher power, the God Fitzgerald would have understood.

In the latter half of my pubescent years, I met a girl, R. Prior to meeting her, my high-school religious experiences consisted of being verbally harassed by Young Lifers for not attending their prayer meeting. R was short and cute and lived in an A-frame house her dad built out in the woods of the Key Peninsula. She was Christian, maybe the most Christian person I, to this day, have ever met. She didn’t just say the words and know the scripture, she truly believed. She was genuinely kind and gave of herself fully. I was an atheist, or maybe an agnostic. She made me want to believe.

With R, I attended Lakebay Covenant Church. She sang in the choir and taught Sunday School youth group. For Christmas she bought me a leather-bound bible with my name inscribed on the cover. I still have it sitting on my bookshelf between a beat-up copy of The Tibetan Book of Living and Dying and The Tao of Pooh. R didn’t care that I wasn’t religious. I cared. It hurt me that I couldn’t connect to something bigger the way R did. When she sang in the choir, she did so with such honest conviction that I cried. I think now that I cried because I could never feel that way about anything. We broke up because after two years we finally realized that we were totally different people. I left for college a month later.

In my first attempt at higher education, I attended Seattle University, a private Jesuit school. At the time, they offered one of the only active creative writing programs in the state. I always dreamed of becoming a professional writer, and what better way than an overpriced Catholic university to set the tone? I was required to take a religion class per the Jesuit curriculum. Any genre of religion was available. However, given the school’s close affiliation with a carpenter and his mother, the primary religion taught was Christianity. I selected a class titled “The Four Gospels.” I read the New Testament adamantly when I studied at Lakebay Covenant so I figured it would be an easy class to fulfill the requirement.

The class pertained to the works of Jesus and not the overall idea of God, but an event occurred in this class that helped me understand all interpretations of a higher power. On the first day of class, a large-framed Catholic priest charged into the room. He dropped a stack of books on the desk and faced the class: twenty-five blurry-eyed kids sitting in a cavernous old stone building with no heat. The priest raised a large brick of a Bible above his head and with all the fire and brimstone he could manage said, “Most of this is made up. But it’s a good book and people connect to it. That’s all that really matters.” I dropped out of SU soon after.

For the next fifteen years, I lived a God-free existence. That might be the best part of growing older: you get to pick and choose what you want to surround yourself with. If you aren’t interested in crochet, you can decide to live a whole existence without it. Coconuts not your thing? Cool. Whole communities in the United State choose to deny dinosaurs existed. Who cares? You want to believe in God, that’s amazing. I just don’t have it in me, and that’s fine.

What happened for fifteen years? Job, life, kid, home-buying, and marriage; normal growing-up and becoming-an-adult stuff. My parents taught me that I really didn’t need to believe in any prescribed over-being. R, in contrast, showed me I wasn’t capable of that sort of blind devotion anyhow. The Catholic priest validated that God is just an idea. I bow my head silently when I am in situations where others are praying, more out of respect for their beliefs than for any inclination of my own. I figured if there was a higher power, whatever it is, it didn’t want us, whatever we are, wasting time worrying about it.

So now after some of the dust settled from becoming a real person, I’m making another attempt at higher education. I’m attending Central Washington University because they have a fully online creative and professional writing program.

I’m not sure if my used copy of The Great Gatsby was marked because previous owner thought the use of the word “God” was blasphemous, or maybe the previous owner’s eyes burned at the site of those three little letters. I’d like to think whoever did own this copy of Gatsby prior to me was so dedicated to a long-game mind-diddling that they realized the inevitable association any English major would impose on the inked-out “God.” Then again, those who have that sort of forethought probably know about chiffon.