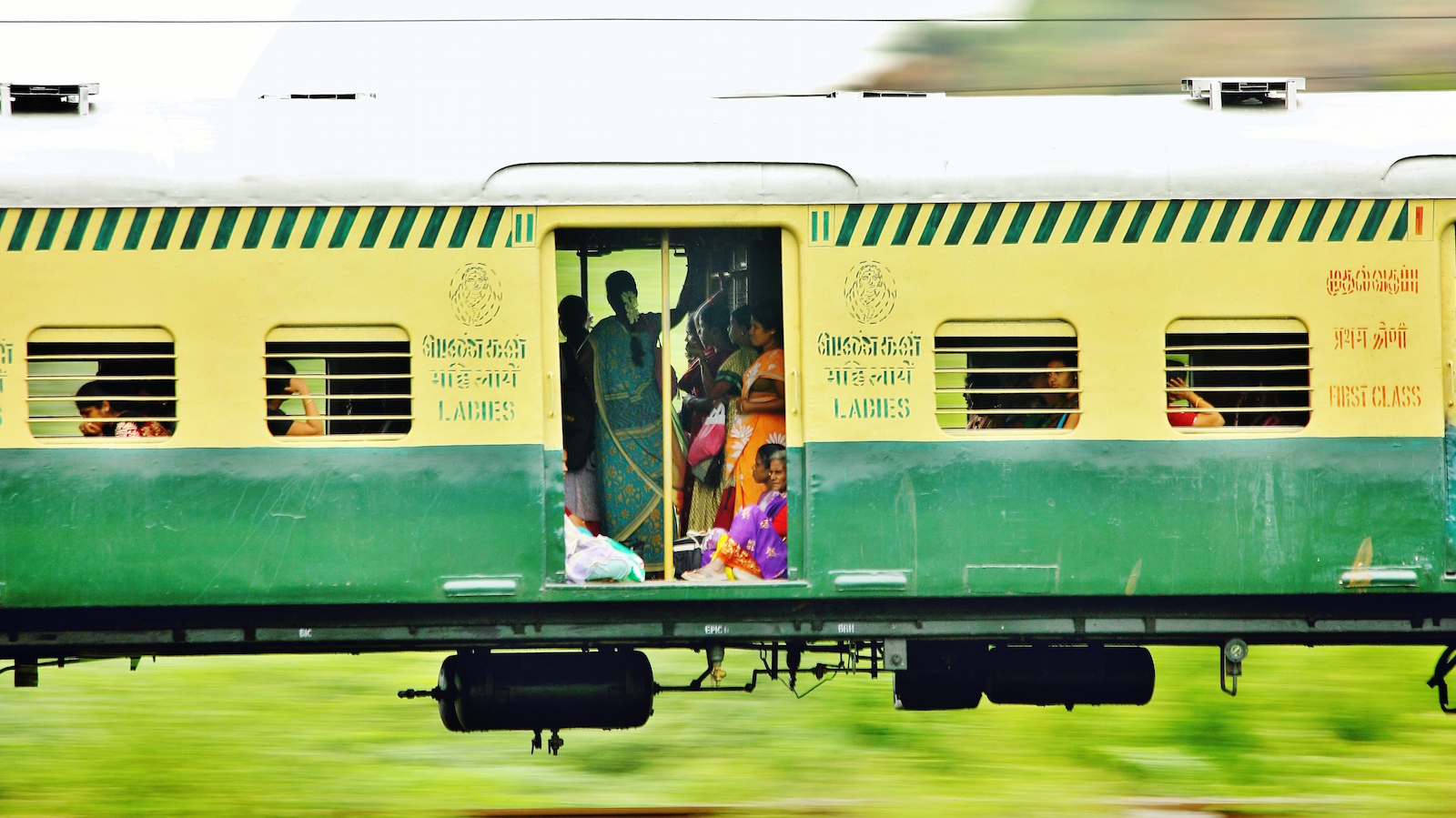 Yesterday, the ladies’ compartment of an early morning train from Howrah was witness to some not uniformly flattering vignettes of everyday Bengali womanhood. Looking at my female co-passengers, as they quickly alternated between affected courtesy and barely concealed ill-will, I could not help recall the faces of complicit onlookers as Christ is led away bearing his cross in Hieronymus Bosch’s paintings. It is entirely possible that my face betrayed similar, if not identical, expressions of dismay, disdain, and disgust as I gloated on this pageant of inter-feminine travelling negotiations with the quotidian philosopher’s predatory zeal. Mobs, I realised, do not allow stragglers. Here was not the studied aloofness and cultivated avoidance of curious or empathetic eye contact one encounters on the London Tube. This was seething animosity, subcutaneous lava, and on at least two occasions, the ensuing verbal eruption, clearly far from uncommon, afforded brief vicarious relish to the likes of yours passively.

Perfectly decent and docile women could be seen elbowing one another with hungry and brazen opportunism. One lady forced herself onto the lap of a girl already seated. Soon, though, the two would go on to have a perfectly amicable discussion about their Samsung smart-phones. The elasticity evident in the interactions – initial competitiveness and aggression making way for camaraderie – between these two strangers is by no means uncommon in Indian transport scenes. Nor would that initial act of corporeal coercion seen by its agent as anything but a regular and good-humouredly tactical way of negotiating issues of prerogative in the public space. In a densely populated province like Bengal, bodies constantly touch and bodies are habitually used as natural instruments of negotiation in crowded places. This would be unthinkable in, say, the London underground, where considerable effort goes into ensuring avoidance of bodily, even ocular contact.

To me, however, that lady’s move also marked the other face of seasoned sub-continental fatalism, the same evident in punitive mob fury after road and hospital fatalities and law enforcement drives alike. Resignation to the persistent miscarriage of the rules of right and equity combined with the newer pangs of adjustment in a changing economy and society seem to have engendered a certain volatility of temper. Malignantly self-righteous assertions of the right of might are quick to erupt and escalate into mindless mayhem. Clearly, these women had learnt the hard way, through the admittedly soul-killing grind of “daily passengery”, that courtesy would be interpreted as exploitable feebleness in this habitually predatory space. Even I had no qualms about pointing out to the same girl, seated opposite, that her foot had inadvertently brushed mine and that, on a third occasion, she was practically standing on it. Not that my feet particularly hurt, but that is precisely the point. I must have been drawn into seeing such pre-emptive alerting as a preventive, self-protective gesture. Aggression, I have read in the discourses of war, is often pre-emptive and defensive in motivation, a way of warding off the possibility of being attacked unawares. Anticipatory aggression, therefore, is intentionally disproportionate. The disproportion is the instrument of putatively effective self-protection.

The verbal and corporeal strategy of these women was characterised by exaggeration of bodily discomfort and ailment. One lady doggedly refused to take her legs off the seat on the plea of some unexplained orthopaedic condition. Every time the train halted at a station and more women squeezed into the compartment, necessitating fresh visual survey of seating availability, looks of bafflement and irritation darted towards her, while she kept her lone flag of stolid resistance unfurled. It was interesting to note the restraint exercised by the surrounding ladies in view of the visible signs of her religious identity. Had she been ‘one of them’, the altercations would have been markedly louder. Even that one little cubicle of struggling Bengali womanhood offered a rich interplay of class, gender, and religious tension and, equally, the subtle dialectics of empathy and antipathy that keeps the sub-continental pressure cooker from bursting.

We were all the mythic Shotin to one another, that stereotypical embodiment of inter-female malice with respect to literal and affective space-sharing or space-swapping. Some of us had the air of the petulant Shuo-rani – regal conqueror cum indolent occupant of a visibly liberal share of the berth. Others wore the resigned mien of the long-suffering Duo-rani, disinterestedly debating whether each berth was supposed to accommodate three, four or five sitters. I realised that the real deviousness lay with the railway think-tank. Why have berths in ladies’ compartments on daytime trains at all? Could they not have forestalled such inevitable frictions – the obvious bane of sub-continental overpopulation – by replacing berths with chairs, as in air-conditioned compartments? Clearly, unspecified space-sharing was intended and tacitly encouraged; the human price stipulated for low-fare ticketing. By that logic, the hostilities engendered by such forced space-sharing are seen by the institution called Railways as only contingently avoidable, if at all, through the natural mechanisms of mutual adjustment among passengers. Its invisible, inscrutable Miltonic neutrality notwithstanding, the Railways could not but implicate itself, in my view of things, in the classic deviousness of patriarchal power-play. The family patriarch in Bangla television serials tends to maintain just such a seemingly benign, ineffectual distantness from the petty TRP-inflected squabbles among his female kin. Could all the motivated bickering in a ladies’ compartment be the indirect fallout of an overconsumption of soap operas? Or is it the reality that prompts serial writers to churn up lurid tales of domesticated Bengali womanhood?

I also noted the unsettling obtrusiveness of transgender alms-seekers in such compartments with their long and touch-happy hands. Expectedly, the exits of air-conditioned compartments remain happily inured from them and the desperation that they end up demonstrating through all their performed vulgarities. In the food chain of second class train travel, they are the predators’ predator. The onus of mutual adjustment, one is inclined to conclude, is necessarily the second-class traveller’s yoke. Both female and third gender travellers consequently feel impelled to perform violence for what they see as self-preservation, while the King of the Dark Chamber – our Indian Railways personified – shakes his hoary locks in condescending pity at the degeneration of ‘ladies’ into Thracian women.

Yet every one seemed to have the decorous ‘Didi’ on their lips, while their tone, alternately importunate and sardonic, belied the veneer of suffering sorority. One teacher-commuter from one of the mufassil towns mentioned International Women’s Day as she ran her finger up and down her Whatsapp counter of contacts, and how a blind woman, a vendor whom her peers seemed all to know of, was due to be felicitated at one of the town halls. What felicitation, I wondered, could be of any consequence to a visually challenged vendor of incense sticks or fried digestive spices, daily braving the apathetic stares of the likes of us?

I was particularly struck by the visceral meanness of over-protective mothers among us. One objected loudly to another standing mother when her toddler’s shoe accidentally touched her own comfortably seated boy’s neatly combed hair. Ostensibly, it was a scandalous breach of hierarchical prerogative and demanded prompt verbal redress. In that compartment on that day, the seated were the envied elite, and the standing disgruntled plebeians.

Every woman in that compartment seemed to be operating on a principle of unabashed self-interest. The boundary of concern stopped emphatically and uncompromisingly at the co-travelling child or kin, if any. All along, the dubiously fortunate children of these mothers stared around furtively. Their singular placidity offered a sharp and intriguing contrast to their mothers’ confrontational body language. Were they silently digesting these early lessons in the efficacies of everyday aggression, the virtues and dividends of awakening from torpor only in instances of perceived threat to self-interest? I could not help mark the demure inertness of these children. Only their eyes betrayed any attempt to register their surroundings, that too without any visible animation. None made any attempt to greet their peers. Many barriers would have had to be surmounted for that to happen. There was little disinterested conversation happening around me anyway, with the exception of one genial elderly lady, also seated opposite, asking all of us by turn where each would alight. I assumed that it would take off once the crowd thinned at Bolpur and the tribulations of self-preservation eased off.

Was it an exceptional day, or one typical of the cut-throat world of daily commuting in a ladies’ or ‘unreserved’ compartment? I would need to travel frequently to find out, and it is very likely I shall write a very differently-toned piece afterwards. This piece for its part was aimed at dismantling gendered preconceptions about violent predispositions, and has, to that end, sought to record observed behavioural tendencies in a travelling crowd.

Bio:
Ananya Dutta Gupta teaches at the Department of English & Other Modern European Languages, Visva-Bharati, Santiniketan. Her occasional forays into creative non-fiction may be found at Musings, Cafe Dissensus, Tinpahar, Coldnoon Travel Poetics, and The Statesman. This piece was originally written for Cafe Dissensus.