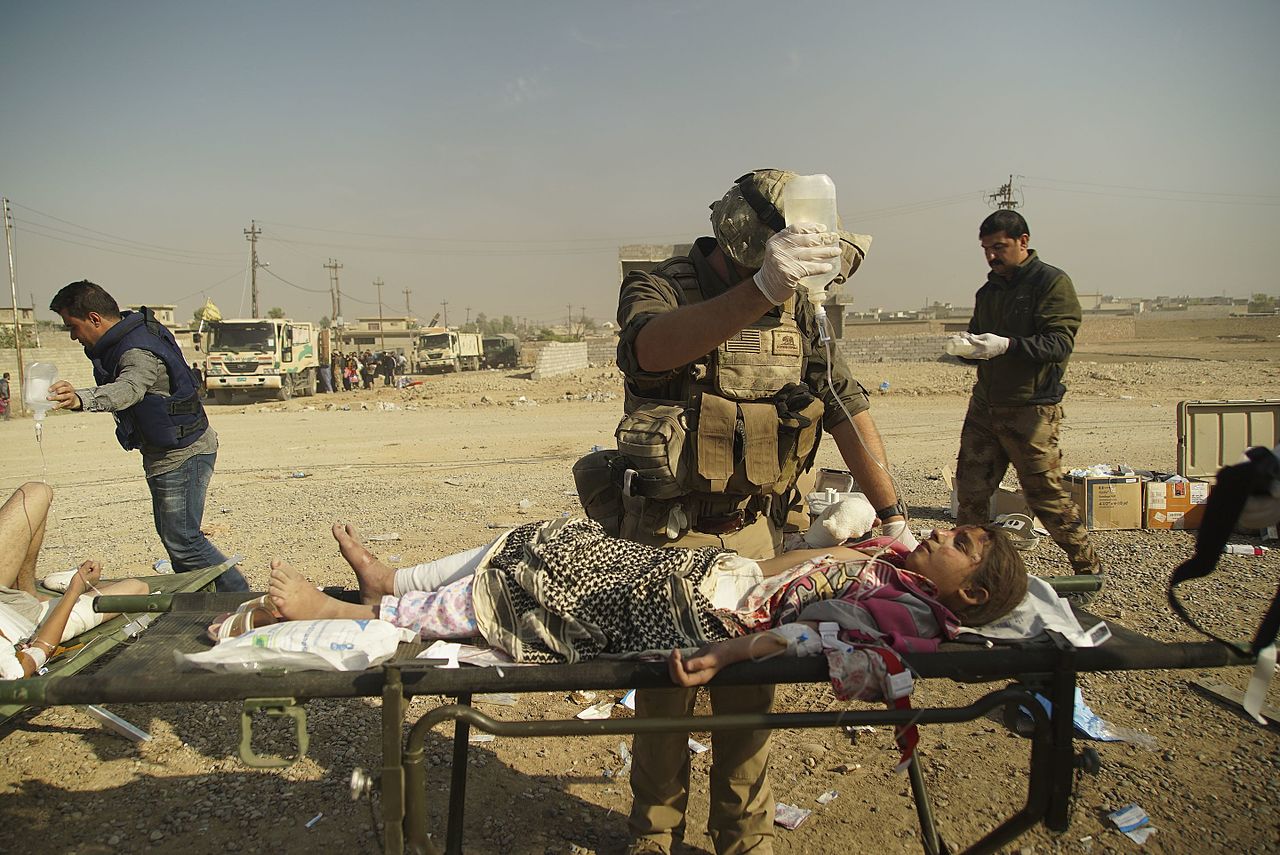 During the March 17th clearing operations in the neighborhood of Jadidah in Western Mosul, several families were killed when an American airstrike appears to have triggered a large number of boobytrapped buildings.

The current civilian death toll is hovering around 300, and across the Atlantic in the United States, the civilian population is shocked at our nation’s seemingly negligent actions.

When huge numbers of civilians are killed, the realities of war can’t easily be ignored, especially when the news has begun to enter the battle and is delivering the media that gets your attention. But if you’re interested in the civilians of Mosul, there is another story you must hear – the story of the refugee camps that skirt the safe zone outside the city.

Sitting atop a hill outside my home in Kurdistan, I can see Kampa Garmawa. It is a white line on the horizon I didn’t see the last time I was here in Kurdistan. At first I thought it was a camp my Yezidi brother is administering. However, when I asked him, he explained that it is a rebuilt UNHCR camp they have set up to filter refugees who are coming out of Mosul. I wanted to go see the camp, but he explained that the camp was on lockdown because it may not be safe.

Later on in Dahouk, I had a chance to ask some other friends about what happens in camps like Garmawa, and the answer is stunning.

Every single person exiting Mosul is given a fair chance. At the checkpoints, people are filtered. Those who are Da’esh (ISIS) that have surrendered are taken to court. Those who say they are refugees are taken through a cursory investigation and then sent to the camp.

In the camps, from what I have gathered, there is an individual vetting process where the civilians are given background checks one at a time. The Asayish (essentially Kurdish FBI) are sorting a city of 700,000 people, one at a time, all the while giving each person the same care, shelter and feeding that any refugee receives.  Investigating this on a day off, I hopped over to the camp with a friend and had a chance to verify this with the camp managers. The process is mostly as discussed above. When the Mosul operation began, the Kurdish refugee population was filtered out, and camps such as this were made a holding centers for IDP’s that could not be verified. I had a chance to review the renovations to the health center. They are making special additions to the medical wing because of the conflict area and the continued fighting.

There is a lesson in humanity here. Regardless of whether or not the person has committed horrific crimes the likes of which we have not seen since the days of Auschwitz, the Kurds are giving their assailants a fair investigation. I will say that it is more than I would do, and every Kurd I know has lost far more friends than I have in this fight.

When contemplating Mosul, which is arguably one of the most terrible ground battle in modern history, we need to not think only of the terrible anomalies but also consider the reality that the military on the ground is taking one of the most humanitarian paths in human history.

This is not a small operation. The Mosul siege and aftermath occupied nearly half of all Peshmerga units at the start, and is now taking up a large percentage of the Iraqi army. I work with these men and women every day. I wish my American friends had this kind of compassion for refugees. I wish I could bring every person here to see the Herculean effort to protect those at risk.

It is easy to jump at the flash news of an American bomb that sets of the suicide charges wired through one of the many buildings where Da’esh keeps civilians hostage. But instead we should look at the humanitarian actions within the battle of Mosul and reflect on how the soldiers are responding to a situation that is perhaps the apogee of conflict traveling a century back through Sykes Picot all the way to our Gulf wars and the premature withdrawal of our forces in 2011 that led to the occupation of Mosul and the Sinjar Genocide.

There is a word the Japanese use, meiyo. Loosely it is translated as “honor,” but more accurately means “correct action.” The battle for Mosul is one of the greatest acts of meiyo the world has seen in modern conflict. But the West is not seeing this; instead we are seeing only a flash clip of blood and war while we steadily increase our use of oil from areas under Western corporate occupation.