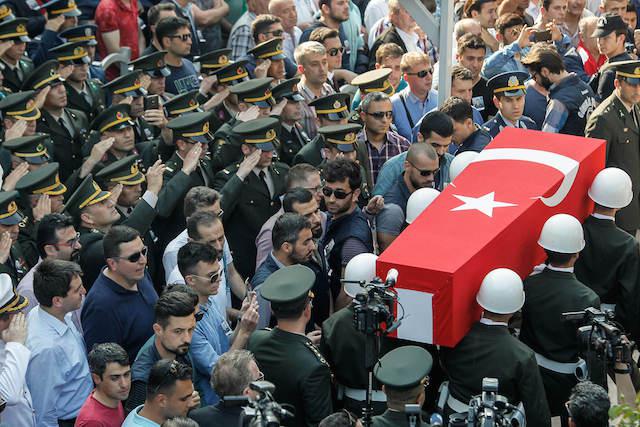 About a decade ago nobody could tell where Istanbul started and ended. Now a decade later, metropolitan İstanbul is larger than ever. The population has reached 15 million. The metropolitan area is so big that it is now divided into about 40 municipalities. But no matter how large or crowded Istanbul becomes, the centralized government structure does not change. There is always a single governor.

18 June, another Ramadan dinner. This time the governor is with the family of a “15 July Democracy Martyr.” Individuals who were killed on 15 July last year in the heat of the attempted coup were quickly labelled by the regime, “Democracy Martyrs.”

For those who are not familiar with the political climate in Turkey, it might be difficult to understand why the governor of the largest city in Turkey is so busy with these ceremonial activities. The reason is not difficult to understand. The regime is promoting militarism and martyrdom. The fallen soldiers and their funerals are the natural outcome of this policy. But the funerals are not reducing the popularity of the regime. The rulers of Turkey are busy promoting martyrdom as a heavenly gift, the ultimate service of the faithful to their nation and religion.

Ramadan dinners are religious events. When organized in honor of martyrs’ families, they signify the religious value attached to the ultimate sacrifice. Home visits provide the personal touch. And official ceremonies provide a shop window for the media.

Nobody dares to question the sanctity of martyrdom. It is very difficult to talk about martyrdom when there are so many fallen soldiers and so many families who are not willing to raise the possibility that their sons died in vain. Thus, the martyrs provide legitimacy for the war they died for. That is exactly what the regime wants. Legitimacy for a deadly and futile policy. The name of the game is martyrdom.

The regime invented the term “Democracy Martyrs” following the same logic. Those who were killed on 15 July last year in the heat of the attempted coup were quickly sanctified. The rally organized by the regime to push Turkey into a political dead-end was named ‘Democracy and Martyrs Rally” so as to drive the point firmly home in public opinion. These people died for a glorious cause: they all died for the regime. If they were willing to be martyrs for this regime, that means this regime was worth dying for.

The people defended it, so it must have a been a good regime, a democracy. Nobody knows what really happened on 15 July last year. But this question fades into the shadows of the “Democracy Martyrs” – their deaths suppress the search for truth.

This is probably why the governor of Istanbul pays special attention to “Democracy Martyrs” and their families. This is probably the reason why on 31 May he met with five individuals, labeled “15 July Veterans.” Nothing coincidental here; it is all very serious business. The regime has even founded a “non-governmental” organization called “15 July Society” and the governor was at the Ramadan dinner organized by this organization on 8 June.

The governor of İstanbul is obviously very busy promoting martyrdom and particularly those labeled as “Democracy Martyrs.” After all, the regime is at stake. But he is not alone. Take the most recent example. The governor of Niğde started his first day on duty with a visit to Ömer Halisdemir’s tomb and gave a passionate speech. Halisdemir was turned into a hero because he shot and killed one of the generals in command of the coup plot. The first order of business for public administrators in Turkey is promoting martyrdom and promoting the 15 July Victory.

Last week Presidential Spokesperson Kalın made this clear for everyone at a press conference in İstanbul:

“Upon the call of President Erdoğan, a process of democracy watch will be initiated once again on the night of July 15. Mr. President will personally attend the democracy watch that night. He will meet with martyrs’ families and veterans on various occasions. In this regard, it is of great importance that we do not let July 15 be forgotten…”.

Serving the public used to be a priority for public administrators once upon a time. The priority now is promoting a regime that has no future. That is what the ongoing frenzy is all about. In Turkey as elsewhere.