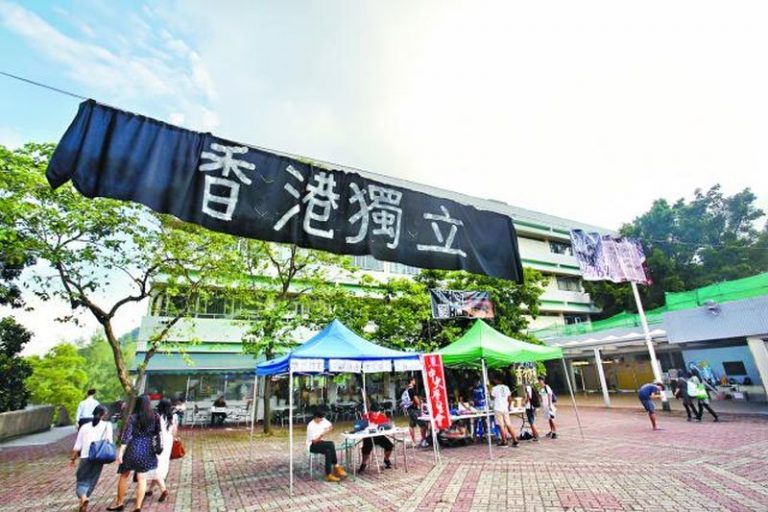 The leaders of 10 universities in Hong Kong are condemning “abuses” of free speech on campuses. In a joint statement published on September 15, university chancellors also expressed firm opposition to the idea of Hong Kong breaking away from China.

Two days later, a Hong Kong politician from the pro-Beijing camp labeled those who advocate for independence as “enemies” who should be killed.

The two events highlighted not only the precarious state of free expression in Hong Kong, but also tensions over the city’s future. Hong Kongers enjoy more freedoms than their counterparts in mainland China under a principle known as “One Country, Two Systems.” This autonomy is enshrined in Hong Kong’s governing doctrine, known as the Basic Law, which went into force in 1997 when the United Kingdom handed the former colony over to China.

According to the Basic Law, the city shall retain its way of life for 50 years, or until 2047. After that date, Hong Kong’s fate is uncertain.

What is certain is that in recent years, Beijing has been more forcefully asserting its influence over Hong Kong. Those who support more democratic rights, such as genuine universal suffrage, or outright independence have faced fierce repression.

The university administrators’ joint statement, which was noticeably brief, was perceived as a response to the appearance of pro-Hong Kong independence slogans on campuses since September 4. The statement in full read:

We treasure freedom of expression, but we condemn its recent abuses. Freedom of expression is not absolute, and like all freedoms it comes with responsibilities. All universities undersigned agree that we do not support Hong Kong independence and believe that it contravenes the Basic Law.

The statement echoed a comment on September 8 from Carrie Lam, the city’s chief executive or top leader, that argued pro-Hong Kong independence messages go against the “One Country, Two Systems” principle and the Basic Law.

Student unions from 12 universities and colleges issued a response:

‘Obviously, the statement is in response to political pressure…’

The joint statement did not specify what the “recent abuses” were, but could be referring to incidents such as a Chinese University of Hong Kong student allegedly using the derogatory term “Chee-na” during a row with mainland peers over independence, or messages posted to bulletin board at Education University of Hong Kong taunting a top Hong Kong education official over the suicide of her eldest son.

Au Kar Lun, an experienced media worker, believed the careful wording of the statement points to it being the product of political pressure from Beijing:

One concrete example of such political pressure emerged when Leonard Cheng, the head of Lingnan University, said students could discuss Hong Kong Independence in campus. In response, a pro-Beijing newspaper criticized him for indulging the students, and a number of pro-Beijing university council members warned that academic and speech freedoms should not be abused to “cover up illegal acts.”

On citizen media platform inmediahk.net, Chu Kong Wai, an alumni of the Chinese University, expressed his disappointment with the university administrators’ statement:

Supporters of the university heads’ statement believe that it is a move to “cut losses” and save the universities from further political intervention under the excuse of cracking down on “Hong Kong independence.” They believe that by condemning the abuse of free speech and reaffirming their stand against Hong Kong independence and their loyalty to the Basic Law, they can maintain space for academia. But they are either too naive or are acting like turkeys [burying their heads in the sand]… The joint statement by the 10 university heads tell us that Hong Kongers cannot even have the right to discuss the mini-constitution. Today we can’t talk about Hong Kong independence, tomorrow we can’t talk about genuine universal suffrage and the day after we can’t even talk about the budget principle of “keeping its expenditure within the limits of revenues” [according to Basic Law Article 107].

‘What’s wrong with killing enemies in a war?’

Opposition to discussion of independence took a turn toward open hostility on September 17 at a rally calling for Hong Kong University to sack Professor Benny Tai for leading the massive pro-democracy protests that took over downtown Hong Kong for three months in 2014.

At the gathering, pro-Beijing figure Tsang Shu Wo exclaimed on stage:

If he advocates Hong Kong independence, he’s not Chinese, he’s an outsider and must be killed.

His comment was met with chants of “no mercy” by the crowd of thousands, including lawmaker and Lingnan University council member Julius Ho, who remarked later that it was “not a big deal to kill pigs or dogs.” He further argued:

If we’re talking about Hong Kong independence, that means war. What’s wrong with killing enemies in a war?

Though a public call to kill is against the criminal ordinance, Secretary of Justice Rimsky Yuen Kwok-keung has played down Tsang’s and Ho’s statements. In contrast, just a month ago, three pro-democracy activists — Alex Chow, Nathan Law, and Joshua Wong — were sentenced to between six and eight months in prison for advocating the peaceful protests of 2014.

‘Have we decided Hong Kong’s direction after 2047? Not yet.’

Perhaps the more fundamental issue is why some Hong Kongers want to discuss independence from China in the first place. Hui Fung Ming, a student activist and a graduate of Education University, argued on inmediahk.net that debate about Hong Kong as an independent state is necessary given the city’s post 2047 future is unclear:

The Basic Law in Hong Kong promises Hong Kong’s way of life will remain unchanged for 50 years. By the time of 2047, Hong Kong’s future will be another round of negotiation. Hong Kong independence is a possibility and option in the negotiation. Have we decided Hong Kong’s direction after 2047? Not yet. A large number of land leases will expire after 2047, and it remains possible that if Hong Kong follows China in adopting the socialist collective system, the land can be confiscated. Is that none of your concern?