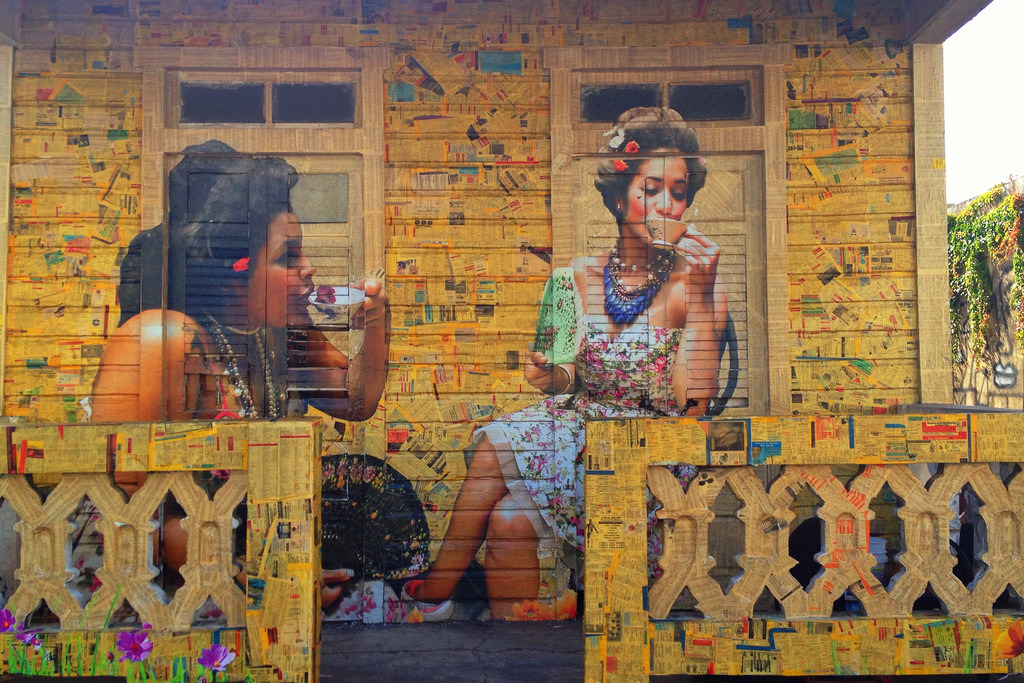 You came to Puerto Rico for the golden sand and sun—gold, you will recall, was also the basis of our first colonizers’ initial attraction. For the endless piña coladas and rum-spiked mysteries. For the colonial charm and quaint, humble lifestyle. Poverty looks so alluring in the Caribbean, what with the bright colors, crystal-clear waters and the backdrop of lush greens—besides, it’s only for a week. Your friends say it’s the hottest Spring Break spot; the newspapers say it’s a debt-ridden disaster; your parents say it’s dangerous and that the water is undrinkable; and the brochures say it’s a (tax) haven, an absolute paradise. So here you are, in your bathing suit and sarong, mojito in hand, ready to focus on your one task for the week: getting a tan.

But it turns out that the sun isn’t nailed onto the sky, and it doesn’t run on one-million 100-watt light bulbs that never fail. The tides rise and the swells are ferocious. Coconuts, palm trees and branches are potential projectiles. And a hurricane is heading straight for your worry-free fantasy.

So you try to catch a flight out of this paradise-turned-inferno, because a hurricane was not on your must-see itinerary. Instead, JetBlue takes you to a hurricane shelter in San Juan, a hot and humid coliseum, where your beach chair is replaced by a cot; your piña colada by a Walgreens water bottle; your dream, by our reality.

The power was out in my house as I imagined the scenario above, which had taken place the day before, right before Irma’s arrival. After Irma’s passing the next morning there were more than a million households without power. The Electric Power Authority (AEE) was predicting the outages would last two to four months, and almost 80,000 households had lost water service as well. Over 6,200 people were in shelters on the northeastern side of the island, and Puerto Rico’s agricultural industry had suffered $30.4 million in losses. The Federal Emergency Management Agency (FEMA) and Governor Ricardo Rosselló were still evaluating infrastructural and residential damages. And now a powerful new storm was heading our way: María.

Puerto Rico is no stranger to crisis. Before Irma’s rampage through the archipelago, Puerto Rico was already in the midst of one of the most devastating financial and socio-political crises in its recent history, with an unaudited $74 billion debt under its belt, $49 billion in pension obligations, and several decades’ worth of illegal bond issuances and trading related to its status as an overly-advertised tax haven. Neoliberal policies such as draconian budget cuts and extreme austerity measures had already rendered life in Puerto Rico quite precarious. And the whole thing was being overseen and managed simultaneously by Governor Rosselló, an unelected and antidemocratic Fiscal Control Board, and judge Laura Taylor Swain, all of whom were going back and forth on the country’s fiscal management and debt restructuring processes.

But even as Hurricane Irma headed straight towards it, for many outside of the country, Puerto Rico is a mere blip on CNN’s news ticker, an enchanting US-owned island on a tourist brochure, that exotic place where the music video for “Despacito” was filmed (and made all the better by Justin Bieber), a pebble sinking between an ocean and a sea that have seen too much.

But Irma’s passing and aftermath have once again brought to light Puerto Rico’s primordial conundrum: colonialism.

Puerto Rico has been a US colony (the US prefers the euphemistic designations of “commonwealth”, “unincorporated territory” and “free associated state”) for 199 years, a relationship that has led to the country’s being trapped in a steep downward spiral. The current fiscal and socio-political crisis is only one of the side effects of this relationship.

Hurricane Irma’s passing underscored the damage done by the neoliberal austerity measures imposed by the Fiscal Control Board and the crimes committed by corporations taking advantage of Puerto Rico’s colonial status. For starters, as a result of the massive closure of public schools, only 329 schools across the island were available as hurricane shelters compared with the 372 available during Hurricane Bertha’s passing in 2014.

Puerto Rico’s infrastructure also finds itself in an advanced state of deterioration, including roads, bridges, the University of Puerto Rico and public service buildings all of whom were critically endangered during Irma’s passing. A good part of the country’s “essential infrastructure” is on the coast, making it vulnerable to flooding, high tides and storm surges, especially during hurricanes of Irma’s or Maria’s intensity.

It is notable that much of that infrastructure was built to benefit the tourist industry and mercantile trade with the US, and the US alone. Money invested in infrastructure tends to go towards revitalizing these “essentials”, not to repairing the potholed roads in our communities, remediating asbestos-filled buildings or replacing crumbling light poles at the mercy of hurricane winds. All of this is further proof of our colonial market dependency and the essentially colonial nature of the tourist industry, which caters particularly to PR’s relationship with the US.

Even the disaster declaration signed by the US President authorizing FEMA assistance for Puerto Rico is second-rate, allowing only for search and rescue, public health and safety, and debris removal. It didn’t include rebuilding or even restoration of power, and with the current fiscal crisis and the Fiscal Control Board’s silence since Irma’s passing, rebuilding and restructuring will be a tough feat for Puerto Rico given the lack of available resources.

The budget cuts, in an already weak economy, will probably make the storm’s social impact worse.

Minet added that a pre-Irma forecast by the Center for a New Economy’s policy director, Sergio M. Marxuach, predicts that the recently approved the Fiscal Plan would result in another lost decade, continued population loss due to migration and lower birth rates, lower employment, less access to public education, pension cuts, worsening health outcomes, higher mortality and lower life expectancy, and, ultimately, higher rates of poverty and inequality. “Now add in the cataclysm of a monster hurricane that the plan never accounted for,” said Minet.

Now, barely two weeks after Irma’s passing, we’ve just been hit by another category 5 hurricane, María. This just as some household have just got back their electricity supply, and while others are still living in the dark; while the ground is still strewn with fallen trees and light posts waiting to take on second lives as projectiles; while many, both locals and refugees from neighboring Caribbean islands, are still recovering from the loss of their homes, their entire reality; and while crisis and colonialism continue to hold hands, as they do every day.

And so, you’re sitting in your cot with your straw hat on, hundreds of locals scrambling around you with what’s left of their lives stuffed into a bag or a suitcase, wondering why JetBlue dropped you off here and high-tailed it; why the shelter is so understaffed; why the power went even though it hasn’t yet started raining and not a gusts of wind has blown; why CNN wasn’t covering Irma’s passing over Puerto Rico. “I’m here, send over an Embassy representative for me!” you yell in your mind as you stare at the screen of your almost-dead smartphone. Why, you wonder, has life had been so unfair to you, ruining your longed-for vacation in the Island of enchantment.

Then your thoughts are interrupted as you spot a window and you walk gloomily towards it and look through pigeon-christened glass, and watch as the storm clouds gather and gusts of wind batter a US flag—oh, and a Puerto Rican one too.