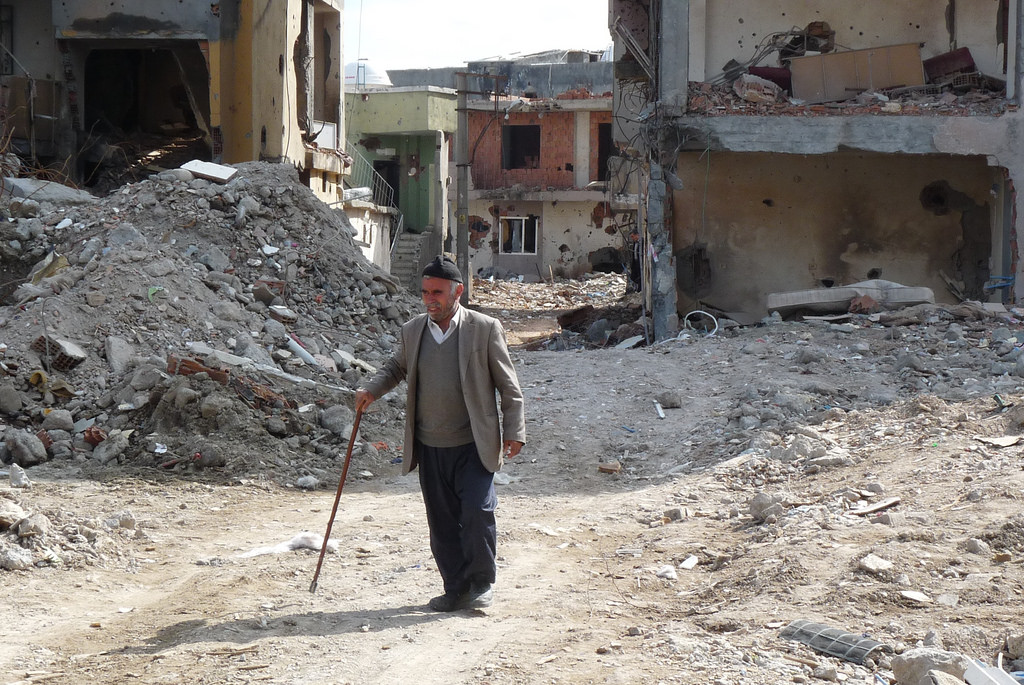 To witness death — not only hearing the detailed stories of how people get killed, seeing circulated images of the tortured bodies but also becoming a target yourself, knowing that you are killable like anyone else — accompanies you in the streets of Diyarbakır. It is this threat of death indeed that cuts life into pieces. The ensuing interplay of life and death unmakes and remakes everyday life in the city.

The stalk of death first got to me on my early morning flight to Diyarbakır in the summer of 2015. Two suited, well-shaven men speaking “high Turkish” sat just behind me and shouted to the hostess: “Did you check that the weapons were on board? You did, right?” I vividly remember these men persistently demanding their weapons, and that was the first time I felt the unease of death, a sticky feeling that aligns bodies and spaces in Diyarbakır.

Who were they? What were their jobs? Were they “the cleansers”? At that time, mainstream media in Turkey had not yet got around to captioning the military presence and destruction in the Kurdish regions “the cleansing operation.” So I still had the terminology of the 1990s in mind, from “the dirty war” in which the Turkish state heavily relied on paramilitary groups in its fight against the Kurds. “90s” refers to very dark times in the collective memory of Diyarbakır, to the times of village evacuations, torture, unidentified murders and forced disappearances (over 17,000).

Here, where life is permanently cut short by the immediacy and unnevenness of violence, I wish to explore how people get by with this suddenness and inevitability of death, the uncanny spaces and voices of war, and the feeling of uncertainty that marks the present.

In July 2015, peace negotiations between the Turkish State and the Kurdish movement reached a sudden end. Thereafter, the Sur district – the historic part of the city known also as the heart of the city – was destroyed in an armed conflict between two parties which took almost four months.[1] Since then, death – the knowledge, anticipation, and fear of it – haunts and hovers over day-to-day life in the city.

Passing by a military vehicle every ten minutes while you walk in the street or a checkpoint, with flying police stations at every corner, has become part of the daily routine. In the days of armed conflict, many considered going out alone and staying out after darkness fell (5 pm in the winter) as “dangerous” and “insane.” The historical neighborhood of Sur turned into a factory producing the knowledge of death, and distributing its unease to the rest of the city. Calculating the safety of a place depended on its distance to Sur: the further away, the safer more people would feel. There were many conversations trying to estimate how far a bullet or a rocket could reach from Sur, to figure out whether this or that spot was safe. Meanwhile, “the safest” places became the four shopping centers located in the new city that began to be built in the 2000s. You can see below how the new city manifests the aspirations of a middle-class lifestyle, with fancy cafes, shopping malls, cycle routes and gated communities.

Only there in 75 District, was it possible to have some mobility and “normalcy” by day. Yet, I visited many houses in that district where furniture close to windows was removed to feel safer. Almost everyone I chatted to in that city mentioned the “uncanny” sense of “danger” out on the streets away from one’s home. As Emily Martin wrote in 2009,

In Freud’s view, the uncanny involves the familiar becoming strange. Sitting in an ordinary place where one is apparently safe – such as a cozy house – one feels exposed to inexplicable terror, about to witness the appearance of things felt to be “too terrible to bring fully to light.” The uncanny is something which ought to have remained hidden but has come to light.

In Diyarbakır, this inexplicable terror could be a bomb explosion; or you could be killed or kidnapped by the paramilitary forces as happened to many in the 1990s. In those four months of armed conflict, we all learned one thousand possible different ways of dying and killing. The unease of death deeply rearranged the social life; redefining people’s attachments to life categories, and creating new rhythms of movement and stasis.

“Every morning for three months when I wake up, the first thing I do is to open the curtains and check the sky to see the helicopter. The moment I leave home, and when I hear the helicopter flying right over me, it is as if I am about to enter one of those famous war movies, sucked into a psychology of war, going to school wondering whether I might have to use a gun or, how I could stay alive and so on. You become aggressive, nervous and restless. You hear different stories of how people get killed every day. There is no reason for you not to be killed” (personal communication, 2015).

In the summer of 2015, when I landed in the military airport in Diyarbakır, the city did not yet have a civilian airport. It was forbidden to take pictures inside and around the airport, as was stated in four languages — ironically, except Kurdish. You could have seen the warplanes on your left side, taking off at anytime of the day. In the days that followed, I noticed that they often took off in the early hours. Everyone in the city knows the particular, sleep-distracting noise of the warplanes. It is like the background music of life, a song that you have to listen to and are stuck with as long as the war continues. This song you hear anytime anywhere during the day, reminding the people living on the ground that they are up there, just ready to bomb. This refrain is indeed a part of the repertoire of war.

During my stay in Diyarbakır, it happened so many times that I wasn’t able to hear my companion unless we waited until the warplanes passed by. Even then, the in-between moments of silence were likely to terminate in a couple of sentences on the situation, often jokes. “Every time they land I imagine one of them crashes. Inshallah they crash” (personal communication, 2015). “Today must be intense (referring to the war) they have not stopped even for a moment” (Ibid.). “Kandil[2] take your guard! They are coming!” (Ibid.)

I arrived at Diyarbakır “at a complicated time” as my taxi driver put it. The two-and-a-half year long peace process was over, and both sides were getting ready to go back to fighting, this time not in the mountains. This gloom waiting was in the air, and the burden from the question of what would happen next. It was a time of in-between-ness, of constant mood-shifting from an optimism that had flourished with the peace negotiations to pessimism and the return of a collective post-war memory (drawing inescapably from past experiences of the 1990s).

I wondered how many different voices could there possibly be after all? Fireworks, guns, bombs, artillery shootings, armored vehicles opening fire, warplanes taking off and landing… If you recognize and are shaken by all of them, does a time come when you cannot distinguish one from another? Along with the uneasy presence of death, the voices of war also shatter the mundane. “Bombings are anytime of the day, especially at midnight it never stops” (Ibid.).

In Diyarbakır, sometimes chatting with people, sometimes walking around the city and smelling the gunpowder in the air, I have learned the repertoire of war. I did online searches in the mornings to figure out which roads were open, which neighborhoods and roads were under curfew, and tried to anticipate the safest as well as shortest way to go from one place to another. The main road going to the only public university in the city, for example, was closed for three months. The alternative roads you had to take added at least half an hour to the time you needed to spend on roads, depending on the traffic. Some days I completely relied on what I would call “the public newspaper/bush telegraph.” I just went out and asked the people for the latest news in the city, where I am not allowed to go that day, which roads are safe, whether there is protest today that means there would be more police, checkpoints and conflicts.

All these conversations and encounters reminded me of the time I spent in the West Bank, a place that is actually recognized as occupied territory. There, I also had to check the news daily to see where I may not be able to go. Then, I would head to the closest bus station and ask locals for hints to make my trip. Immediately, people would come together and discuss the shortest and at the same time the safest path to take. For half-an hour long journeys, the typical conversation would be:

Yet, most of the time there would not be a single conclusion agreed by everyone. So I would just decide to find my way out in-between the roads allocated for the Israeli army, for settlers and Palestinians, given the ever-changing daily closures. The point is, such uncertainties – uncanny places, unknown voices and roads, unimaginable future plans – have nothing to do with the individual per se. Nevertheless, they are very much the lived experiences of everyday life in the Occupied Territories. As a result, in neo-colonial geographies, what you see in the Google map would never match the reality you deal with on the ground.

Avoiding attributing any reason or function to violence, in this short piece, I have kept track of the unmakings and remakings of the everyday in Diyarbakır, a city shattered by violence. I argue that the unease of death, the uncanny places, voices and uncertainties of war, have all played significant roles in shaping the intimate reaches of people’s lives.

[1] A line from Rénas Jiyan`s poem Janya. The word pezkoviyan means mountain goat in Kurdish. The loose translation would be “for the tribes of mountain goats – always uptight and timid – there is no sleep”.

[2] The name of the mountain in the border of Iraq-Iran where many of the PKK camps are.