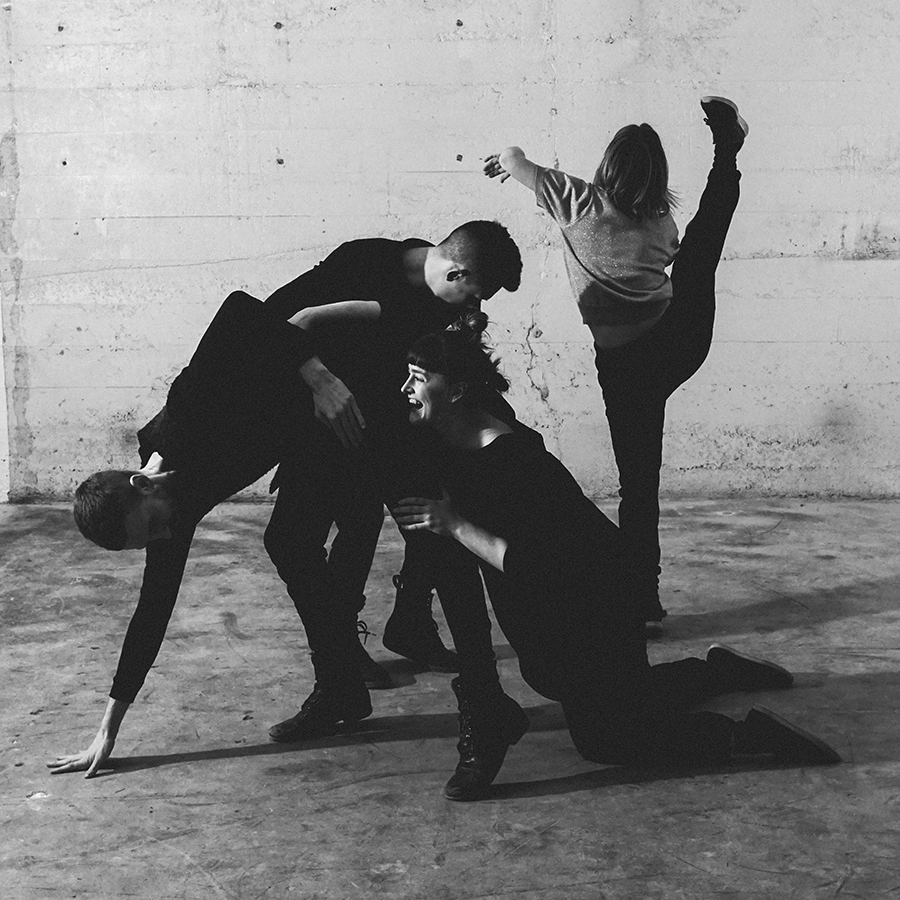 It is difficult to describe the work Kim Lusk is doing within A Dance for Dark Horses, her new feature length performance having its world premiere this weekend at Velocity Dance Center, without first having to define kineticism and how she is using it. Dance is kinetic the way a song on the Muppet Show is kinetic; or the way the Pointer Sisters’ Neutron Dance is kinetic; or the way a halfway decent song by Major Lazer is kinetic; or Kraftwerk, or the Art of Noise. It is contagious, it is electric, and you can’t help but get caught up in the energy. As a choreographer, Lusk is exploring kineticism in order to find ways to entertain and engage at the same time.

Lusk is committed to making dance a more communal experience, much the same way traditional shape note singing (another of the choreographer’s interests) opened choral singing to a general populace. Lusk achieves this by marrying particularly challenging movement phrasing with deadpan humor, a touch of physical comedy and the seemingly mundane. At a recent open rehearsal Lusk explained that she was looking to expand what constitutes a “basic dance component,” (I paraphrase) moving it away from the esoteric and difficult toward a more open and universal approach. As an example, she shared, Lusk and her company watched videos of people dancing at raves and EDM concerts on YouTube and found inspiration in the small compact dance moves being used in some of them. She then demonstrated a simple phrase composed of arms held to the side, fingers pointing at each other and stepping in place; it really is as easy as it sounds, but placed in context it packs an enormous impact.

Providing the context and the impact is a company of the titular dark horses that Lusk describes as “a group of underdogs,” composed of Erin McCarthy, Alexander Pham, Shane Donohue and Lusk herself†. These underdogs are servants to the aforementioned kinetic energy, a fact that repeatedly finds them expressing that connection in increasingly incongruous ways, either individually or as a group. A lot of humor is derived from these juxtaposed moments of absurd physical challenges (like a solo featuring a tambourine), which are then followed by equally gratifying moments when those challenges are achieved with grace (you will believe a tambourine is a key and oft ignored dance component).

A particularly striking example of this comes in the middle of the evening, in a portion that was excerpted for last year’s Northwest New Works at On the Boards. It begins with Lusk and Donohue in an intricate pas de deux that finds them sharing very little physical and visual contact while Pham is slowly and quietly dancing the rave inspired finger dance in a corner of the space. These two unlikely moments share the space and then transform into a quartet where the players clearly enjoy moving in unison just as much as they want to burst out into individual expressions of joy.

From there, the evening progresses through a couple more movements, duets and solos, some people in Spiderman costumes, some Bollywood flavoring and the odd cowboy dance kick for good measure. All culminating in a final moment of unexpected lyrical beauty. The audience is then presumably inspired enough to take the energy back home to cut their own rugs or to a nearby dance club. The world should be so lucky…

†Also featured in the evening are Jenna Eady, Britt Karhoff, Devin Muñoz, Lillian Orrey and Katie Wyeth in a portion of the evening not seen for this entry.

EDIT: As this post was written after watching a rehearsal, Mr. Amador wished to express additional thoughts upon watching a full performance with an audience:

“I just have a small list of things I neglected to mention the first time through. First of all is the sheer joy it is to watch these bodies move through space. The combination of grace and comedic acumen means that there is never a moment where you are not being delighted. No one performer could be singled out for this. An extra note of appreciation for the variety and diversity shown within the ensemble. This was particularly highlighted in the quintet with the younger performers not seen during rehearsal.

“Second is the impact Ryan Hume’s music has on the proceedings, itself a separate character. Mr. Hume has studied his sources (see the “kinetic” list at the top of the page) well. The nods to Trevor Horn were appreciated, as was the booming bass.

“The final grace note comes from just how effortlessly funny the entire evening is, without having to resort to cheesy low brow theatrics. It truly is something to behold.

“Tickets are still available for Sunday night’s performance, otherwise I would recommend showing up early and getting on the standby list.–ja”