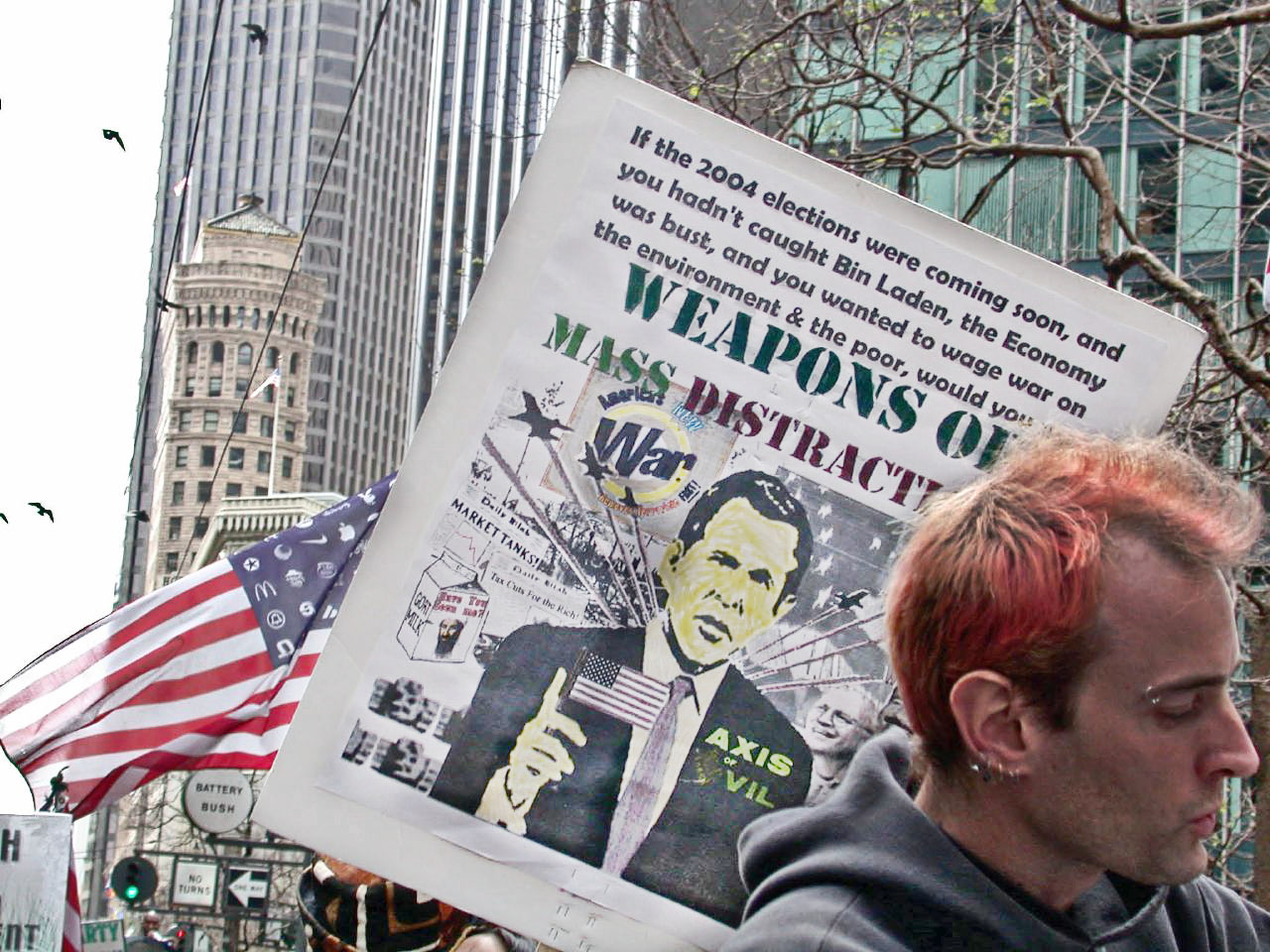 The war on Iraq won’t be remembered for how it was waged so much as for how it was sold. It was a propaganda war, a war of perception management, where loaded phrases, such as “weapons of mass destruction” and “rogue state” were hurled like precision weapons at the target audience: us.

To understand the Iraq war you don’t need to consult generals, but the spin doctors and PR flacks who stage-managed the countdown to war from the murky corridors of Washington where politics, corporate spin and psy-ops spooks cohabit.

Consider the picaresque journey of Tony Blair’s plagiarized dossier on Iraq, from a grad student’s website to a cut-and-paste job in the prime minister’s bombastic speech to the House of Commons. Blair, stubborn and verbose, paid a price for his grandiose puffery. Bush, who looted whole passages from Blair’s speech for his own clumsy presentations, has skated freely through the tempest. Why?

Unlike Blair, the Bush team never wanted to present a legal case for war. They had no interest in making any of their allegations about Iraq hold up to a standard of proof. The real effort was aimed at amping up the mood for war by using the psychology of fear.

Facts were never important to the Bush team. They were disposable nuggets that could be discarded at will and replaced by whatever new rationale that played favorably with their polls and focus groups. The war was about weapons of mass destruction one week, al-Qaeda the next. When neither allegation could be substantiated on the ground, the fall back position became the mass graves (many from the Iran/Iraq war where the U.S.A. backed Iraq) proving that Saddam was an evil thug who deserved to be toppled. The motto of the Bush PR machine was: Move on. Don’t explain. Say anything to conceal the perfidy behind the real motives for war. Never look back. Accuse the questioners of harboring unpatriotic sensibilities. Eventually, even the cagey Wolfowitz admitted that the official case for war was made mainly to make the invasion palatable, not to justify it.

The Bush claque of neocon hawks viewed the Iraq war as a product and, just like a new pair of Nikes, it required a roll-out campaign to soften up the consumers. The same techniques (and often the same PR gurus) that have been used to hawk cigarettes, SUVs and nuclear waste dumps were deployed to retail the Iraq war. To peddle the invasion, Donald Rumsfeld and Colin Powell and company recruited public relations gurus into top-level jobs at the Pentagon and the State Department. These spinmeisters soon had more say over how the rationale for war on Iraq should be presented than intelligence agencies and career diplomats. If the intelligence didn’t fit the script, it was shaded, retooled or junked.

According to the trade publication PR Week, the Rumsfeld Group sent “messaging advice” to the Pentagon. The group told Clarke and Rumsfeld that in order to get the American public to buy into the war on terrorism, they needed to suggest a link to nation states, not just nebulous groups such as al-Qaeda. In other words, there needed to be a fixed target for the military campaigns, some distant place to drop cruise missiles and cluster bombs. They suggested the notion (already embedded in Rumsfeld’s mind) of playing up the notion of so-called rogue states as the real masters of terrorism. Thus was born the Axis of Evil, which, of course, wasn’t an “axis” at all, since two of the states, Iran and Iraq, hated each other, and neither had anything at all to do with the third, North Korea.

Tens of millions in federal money were poured into private public relations and media firms working to craft and broadcast the Bush dictat that Saddam had to be taken out before the Iraqi dictator blew up the world by dropping chemical and nuclear bombs from long-range drones. Many of these PR executives and image consultants were old friends of the high priests in the Bush inner sanctum. Indeed, they were veterans, like Cheney and Powell, of the previous war against Iraq, another engagement that was more spin than combat .

At a diplomatic level, despite the hired guns and the planted stories, this image war was lost. It failed to convince even America’s most fervent allies and dependent client states that Iraq posed much of a threat. It failed to win the blessing of the U.N. and even NATO, a wholly owned subsidiary of Washington. At the end of the day, the vaunted coalition of the willing consisted of Britain, Spain, Italy, Australia, and a cohort of former Soviet bloc nations. Even so, the citizens of the nations that cast their lot with the U.S.A. overwhelmingly opposed the war.

Domestically, it was a different story. A population traumatized by terror threats and shattered economy became easy prey for the saturation bombing of the Bush message that Iraq was a terrorist state linked to al-Qaeda that was only minutes away from launching attacks on America with weapons of mass destruction.

Americans were the victims of an elaborate con job, pelted with a daily barrage of threat inflation, distortions, deceptions and lies, not about tactics or strategy or war plans, but about justifications for war. The lies were aimed not at confusing Saddam’s regime, but the American people. By the start of the war, 66 per cent of Americans thought Saddam Hussein was behind 9/11 and 79 per cent thought he was close to having a nuclear weapon.

Of course, the closest Saddam came to possessing a nuke was a rusting gas centrifuge buried for 13 years in the garden of Mahdi Obeidi, a retired Iraqi scientist. Iraq didn’t have any functional chemical or biological weapons. In fact, it didn’t even possess any SCUD missiles, despite erroneous reports fed by Pentagon PR flacks alleging that it had fired SCUDs into Kuwait.

This charade wouldn’t have worked without a gullible or a complicit press corps. Victoria Clarke, who developed the Pentagon plan for embedded reports, put it succinctly a few weeks before the war began: “Media coverage of any future operation will to a large extent shape public perception.”

“A lot of our imagery will have a big impact on world opinion,” predicted Lt. Jane Larogue, director of Combat Camera in Iraq. She was right. But as the hot war turned into an even hotter occupation, the Pentagon, despite airy rhetoric from occupation supremo Paul Bremer about installing democratic institutions such as a free press, moved to tighten its monopoly on the flow images out of Iraq. First, it tried to shut down Al Jazeera, the Arab news channel. Then the Pentagon intimated that it would like to see all foreign TV news crews banished from Baghdad.

Few newspapers fanned the hysteria about the threat posed by Saddam’s weapons of mass destruction as sedulously as did the Washington Post. In the months leading up to the war, the Post’s pro-war op-eds outnumbered the anti-war columns by a 3-to-1 margin.

Back in 1988, the Post felt much differently about Saddam and his weapons of mass destruction. When reports trickled out about the gassing of Iranian troops, the Washington Post’s editorial page shrugged off the massacres, calling the mass poisonings “a quirk of war.”

The Bush team displayed a similar amnesia. When Iraq used chemical weapons in grisly attacks on Iran, the U.S. government not only didn’t object, it encouraged Saddam. Anything to punish Iran was the message coming from the White House. Donald Rumsfeld himself was sent as President Ronald Reagan’s personal envoy to Baghdad. Rumsfeld conveyed the bold message than an Iraq defeat would be viewed as a “strategic setback for the United States.” This sleazy alliance was sealed with a handshake caught on videotape. When CNN reporter Jamie McIntyre replayed the footage for Rumsfeld in the spring of 2003, the secretary of defense snapped, “Where’d you get that? Iraqi television?”

The current crop of Iraq hawks also saw Saddam much differently then. Take the writer Laura Mylroie, sometime colleague of the New York Times’ Judy Miller, who persists in peddling the ludicrous conspiracy that Iraq was behind the 1993 bombing of the World Trade Center.

How times have changed! In 1987, Mylroie felt downright cuddly toward Saddam. She wrote an article for the New Republic titled “Back Iraq: Time for a U.S. Tilt in the Mideast,” arguing that the U.S. should publicly embrace Saddam’s secular regime as a bulwark against the Islamic fundamentalists in Iran. The co-author of this mesmerizing weave of wonkery was none other than Daniel Pipes, perhaps the nation’s most bellicose Islamophobe. “The American weapons that Iraq could make good use of include remotely scatterable and anti-personnel mines and counterartillery radar,” wrote Mylroie and Pipes. “The United States might also consider upgrading intelligence it is supplying Baghdad.”

In the rollout for the war, Mylroie seemed to be everywhere hawking the invasion of Iraq. She would often appear on two or three different networks in the same day. How did the reporter manage this feat? She had help in the form of Eleana Benador, the media placement guru who runs Benador Associates. Born in Peru, Benador parlayed her skills as a linguist into a lucrative career as media relations whiz for the Washington foreign policy elite. She also oversees the Middle East Forum, a fanatically pro-Zionist white paper mill. Her clients include some of the nation’s most fervid hawks, including Michael Ledeen, Charles Krauthammer, Al Haig, Max Boot, Daniel Pipes, Richard Perle, and Judy Miller. During the Iraq war, Benador’s assignment was to embed this squadron of pro-war zealots into the national media, on talk shows, and op-ed pages.

Benador not only got them the gigs, she also crafted the theme and made sure they all stayed on message. “There are some things, you just have to state them in a different way, in a slightly different way,” said Benador. “If not, people get scared.” Scared of intentions of their own government.

It could have been different. All of the holes in the Bush administration’s gossamer case for war were right there for the mainstream press to expose. Instead, the U.S. press, just like the oil companies, sought to commercialize the Iraq war and profit from the invasions. They didn’t want to deal with uncomfortable facts or present voices of dissent.

Nothing sums up this unctuous approach more brazenly than MSNBC’s firing of liberal talk show host Phil Donahue on the eve of the war. The network replaced the Donahue Show with a running segment called Countdown: Iraq, featuring the usual nightly coterie of retired generals, security flacks, and other cheerleaders for invasion. The network’s executives blamed the cancellation on sagging ratings. In fact, during its run Donahue’s show attracted more viewers than any other program on the network. The real reason for the pre-emptive strike on Donahue was spelled out in an internal memo from anxious executives at NBC. Donahue, the memo said, offered “a difficult face for NBC in a time of war. He seems to delight in presenting guests who are anti-war, anti-Bush and skeptical of the administration’s motives.”

The memo warned that Donahue’s show risked tarring MSNBC as an unpatriotic network, “a home for liberal anti-war agenda at the same time that our competitors are waving the flag at every opportunity.” So, with scarcely a second thought, the honchos at MSNBC gave Donahue the boot and hoisted the battle flag.

There’s a helluva caveat, of course. Once you buy it, the merchants of war accept no returns.

Jeffrey St. Clair is editor of CounterPunch. His new book is Bernie and the Sandernistas: Field Notes From a Failed Revolution.