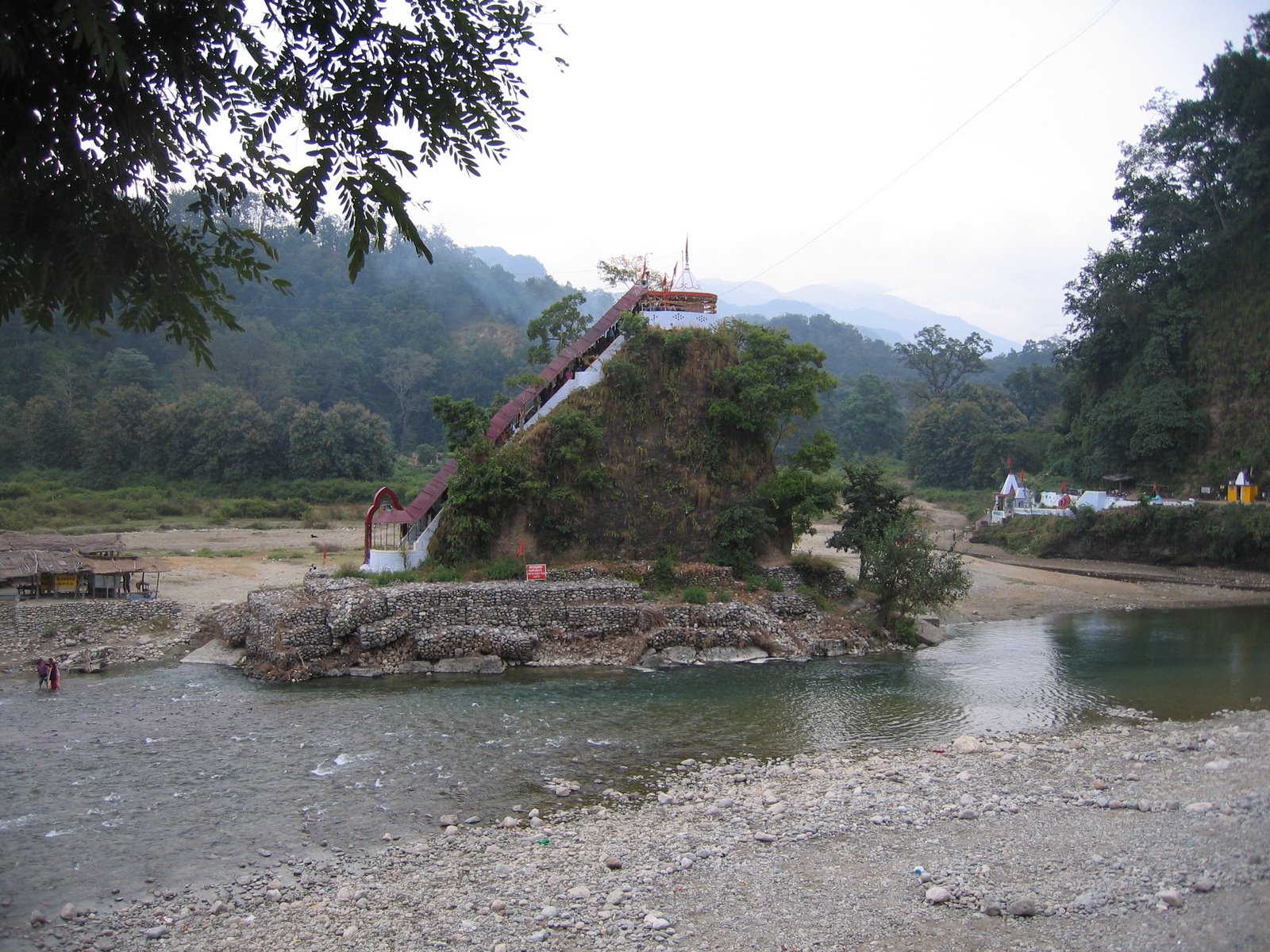 “The river water will be refreshingly cool,” said Shank.

After seeing the Garjia Devi temple, situated in the middle of the Kosi river, both friends were moving rapidly towards the forest with their picnic gear, jumping and bouncing on the big slippery smooth rocks by the riverbank.

“Should we bathe?” asked Shank.

“But we didn’t bring any clothes!”

“Then let’s take off these clothes and wear them later!”

“What if someone saw us naked? There are devotees about, and villagers. We’ll get thrashed…”

“We left them all behind around that bend. Who’s here to see us naked? These buffaloes? They are naked too. Wish they were naked girls. Don’t fret, you Dumbo. We’ll remain covered in the water.”

This appealed to Rosh. He was feeling the heat too, and nowadays he never left an opportunity to swim. He had recently learnt to swim. And this place seemed safe enough to swim.

Both friends took off all their clothes, secured them underneath their gear on the riverbank, and got into the water.

The cool water provided instant relief from the roasting sun. Rosh was bathing naked in the open for the first time in his life. He felt shy and scared, but it was also fun.

“Let’s put the beer in the water,” Shank suggested. “Get it chilled. We can drink while we bathe, or we’ll have to put up with warm beer later.”

It was a brilliant idea. But it was a pious place. Rosh felt reluctant to drink here.

Shank understood his dilemma. He laughed and said, “There is a couplet, reportedly by Mirza Ghalib:”

(Zahid, let me sit and drink in the mosque.
Or, show me place where there is no God.)

Rosh lit up. Both friends went back to the riverside, brought all the beer bottles into the river, a few at a time, and jammed them securely between stones of the shallow river.

The beer got chilled in no time. Time passed very quickly – laughing and gossiping, drinking beer, swimming and bathing. Intoxication rose, as the sun climbed higher.

“Wish we had the courage to sit in the mosque and drink,” Rosh said as he swayed. “One day we will!”

“We are fine here,” Shank said, opening a new bottle. “Only one’s left now. If people in the masjid borrowed it, we’d be left smelling the lid … ”

“Who’d borrow beer from us in the mosque!” the drunk Rosh assured his friend. “But, that wasn’t the point…”

“Man forgets God when he is drunk anyway,” Shank interrupted him. “Then what does it matter if He is or isn’t somewhere. His presence or absence is no longer an issue.”

“It may stop being an issue after a man is drunk,” said Rosh. “But it is an issue before one begins to drink. A drunk abusing someone may be forgivable, a sober abusing someone will not be…”

“Your issue was resolved by Muhammad Iqbal decades ago, matey,” Shank grunted. “What did Iqbal say? Listen:”

(The Mosque is God’s abode, not a place to drink.
Enter the heart of a non-believer, God isn’t there.)

“Wow… What a gem, Shank!” Rosh appreciated hearing poetry fit for the occasion. “If God were in the heart of a non-believer, they couldn’t remain an infidel, could they? Undoubtedly, a great sher.”

“But buddy, why does this Iqbal call the Mosque God’s abode? His house is the whole world…”

“Idiot,” Shank was now in full mood. “The world isn’t God’s home. It is his workshop. And sometimes His machinery also malfunctions. Or haven’t you seen the oddities produced sometimes?”

“Wow! Very good!” Rosh was generous again in his appreciation. “I’ve never thought like that…”

“Don’t just wow meaninglessly,” Shank was excited now. “If Iqbal knew Allah well, he wouldn’t have had so many complaints, would he? Ahmed Faraz cut him down decades ago. Hear this:”

(Faraz has seen God in the infidel’s heart.
The non-believers are just unaware of His presence there.)

“Wow… very well said!” Rosh stood up excitedly in the river. “He calls them infidels, who called others infidels…”

“Get below the water, Uncle,” Shank shouted. “People are about now. Do you want us beaten? We’re already drunk. If people saw us naked too, they’ll smash us.”

“Incontestable,” Rosh said, ducking down, but his attention was still on Mr. Faraz’s Shayari rejoinder. “There can be no answer to this. Now there’s nowhere a good fellow can sit down and enjoy a drop…”

“There is a response to everything, buffalo tail,” laughed Shank. “It may have taken years to arrive, but that argument was countered. The response came from Wasi Saheb…”

(God’s omnipresent in the world. You better go to paradise,
there’s no prohibition there.)

“What sort of an answer is this?” Rosh was dumbfounded. “Die! Can’t drink anywhere in peace here. So, drinking becomes a crime. One must die first to drink now … ”

“Whether it is for drinking or living, sonny boy,” Shank smiled, “unless you die yourself, you can never get to heaven. But why are you bitching? Muslims have a great arrangement even in paradise. Seating you on the left side of Allah, the beauties themselves serve you goblet after goblet. Best alcohol, absolutely free, no limit…”

“Where’s the fun of intoxicated living in pleasures after death?” Rosh replied, finding the offer unappealing. “And who am I to be allowed in paradise, when Adam got banished from there? It would be a No Entry for me anyway.”

“Bhalki’s Paradise Hotel would suit us better. The alcohol’s there, paradise is there, even though there are no beauties. It is even called Paradise.”

“You’re calling that tin shed dark den Paradise, you moron,” Shank ridiculed him. “Sitting on dirty, smelly benches, and having to drink in filthy, unclean glasses. With the smell of urine, vomits and rotting food wafting in from the backyard.”

“I would never have sat there and drunk, had the proprietor not been giving us free onions in salad and unlimited curry in Egg Curry. On top of that, 4-6 people have to pool up funds just to buy a single bottle of Old Monk Rum.”

“Let’s die to drink too, buddy, if the beauties are certain in Paradise,” Rosh said, and stood up excitedly again. He had already accepted Shank’s logic.

“When I see such oddballs claiming a (heavenly) reservation, I reckon we might have a fighting chance too (getting there without reservation). Let’s walk in front of an oncoming truck.”

“Are you an idiot?” Shank laughed out loud. “So beguiled by Wasi Shah’s words, you’re all prepared for Paradise. Another poet has already counter argued Wasi’s poetry.”

“Already?” Rosh paused and stopped dead in his tracks. “Can there ever be an answer to that…?”

“There can be an answer to everything, unruly moustache,” Shank grabbed his hand and pulled him beneath the water. “Listen:”

(I drink to forget the worries of this world, wine-provider.
There are no worries in paradise. Drinking there would be no fun.)

“Don’t tell me now that this has a counterargument too,” Rosh gripped his head and sat down.

“Why not?” Shank boasted. “Have you heard of Mir? Mir says:”

(We drink for pleasure, sorrow is infamous unnecessarily.
Drink up a bottle, and this world will seem no less than paradise.)

“Got more beer, friend?” Rosh asked happily. “This Mir seems like our type of guy…”