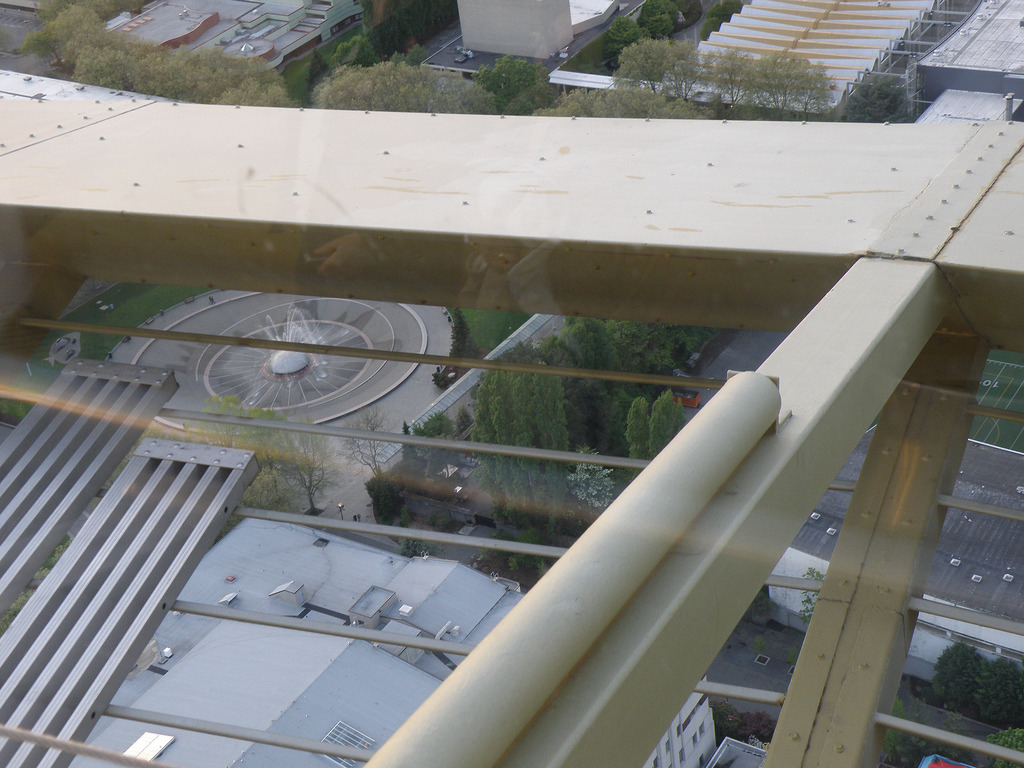 The floodlights resembled an upside-down sun.  Beyond the sun was the hard ceiling of the Parvis du Notre Dame — just as he began to glide above the long snowy knoll outside the Seattle Center House.  He swooped straight over the heads of the crowd, who ducked, as he raised up again and then swooped down towards the spike in the Center Fountain.  Stretched completely flat, prone, his arms straight out to support the wings.

When Art regained altitude, the spectators turned their heads in unison.  He might be able to land on top of the Opera.  He could barely see now, and with the wind in his nose he couldn’t breathe.  He crashed into the Opera. Art was already in the arms of angels.  A trickle of blood came from his nose and mouth.  Under each of his arms was more blood, making him look, in his black outfit, like a red-winged blackbird.

Juliette, his girlfriend, ran toward him.

What were women? The particular women who waited for Christ in the morning after Gethsemane did not understand abstraction. They were humble. As you look at the women through the peephole of a peep show, they are abstractions. They are not women with a mother, a father, a memory of a first report card, a kiss from their father for an A, a kiss from their mother as they stood before their mother and sang their first song. Real women are particulars.

Juliette put her application down at the peep show and walked out.

Christmas Eve had come and gone and Art’s death had been declared in the newspapers.

Several months after Art’s death, Juliette looked at the sky above Seattle, piled nearly to heaven with clouds pregnant with snow. Every day she tried to paint those clouds. They were neither diffuse and grandiose, like Turner’s, nor hard-edged, like Henri Rousseau’s. Those two were her favorite cloud daubers, but the clouds above Seattle were her own to define, now, to spend a life-time painting, as that had become her sole ambition: peintre.

She looked at the Victorian houses arranged on a sequence of hills, and the few beams of sun that broke through the clouds to illumine them, and found it difficult to restrain a sense of sorrow in the fact that her father still defined this city, even in death. Her father had laughed at her ambition to be a painter, because he felt that patron was the proper role for the ruling class. In fact, artists were mere illustrators for the patrician authorities.

She had had Art’s child eight months after his death. She had enough money from her birth-mother’s inheritance and her paintings and her half-time job at a vegetarian restaurant to pay for daycare. In the evenings she played games with the girl, and taught her to tap her fingers, and sing. However, she gave the girl up for adoption so she could focus on painting.

Juliette’s painting career, which was to occupy her for the rest of her long life, was sustained by society men and women who asked her to paint their weddings and funerals. It was the catastrophic sequence of scenes from Art’s flight off the Space Needle that were most highly sought after by international collectors. These paintings, which chronicled every nuance of the final flight from the initial jump to the final crashed landing, secured her international reputation. Finally, she was invited to give a public showing at the Whitney Museum of Art by one of her father’s old friends when she was eighty.

After Art’s crash, she had never been the same. She suffered from a low-level chronic depression. The only thing she remembered was Art, as he hit the cobblestones sidewise.

Juliette studied Lutheran theology as her mind began to recover from depression over her lover’s death and tried to do a Ph.D. focusing on the aesthetic tradition since the Reformation. Luther had only suggested one plastic image: Mother Mary with her eyes raised to heaven in gratitude. Juliette’s doctoral dissertation tried to narrow down to a code the Lutheran visual aesthetic as it could be seen in Søren Kierkegaard, Paul Tillich, and Reinhold Niebuhr. Juliette realized that Luther did not think that painting was a matter of adiaphora. It had more to do with salvation than automobile repair and almost as much as hymns.

Juliette was embarrassed as she projected her life into her eighties but following no career track. Every day as she grew older there might be instances of beauty… the way a sparrow came to rest on the branch of an ornamental cherry, the dance of a garbageman as he twirled to empty a can into the back of a garbage truck, the way a wave caught a gleam of sunlight in the Puget Sound, a rainbow forming in the mist rising from a peeled orange. She continued to work. It might have killed Juliette to see her new work year after year – the harmonic pastels and the torn-paper assemblages, her depictions of the latest turns in ballet, paintings done in the style of Georges Rouault of the various scenes in the Old and New Testament. She got older and showed her work, so no one realized that this now rumpled but kind older woman had once been a young woman with beauty and promise.

With her love dead and no other friends, Juliette took to going to art parties in a pastor’s outfit and standing in a corner, unable to approach anyone, and unable to let anyone speak to her who did approach.

She went into a loft where hordes of black leather punks were slamming into one another and then she saw a girl in ethereal Gothic make-up.

Juliette walked over in her direction drawn in by her green imperialistic eyes and put her hand on her forehead and said that God would forgive her. A man in a white suit and tie up on the stage was singing about fat people in sports cars:

The lines repeated as the singer shouted them into the microphone and the guitarist picked out an obsessive solo. A slim blonde girl played the bass and another slim blonde girl (who was a cutter) hit the drums in the back.

Juliette walked out into Pioneer Square. It was dark out and no longer quite summer. A delicate mist fell, and bums sat on steps with grizzled beards, all trying to deal with having lost their ideals, and losing their minds in the process.

Young women walked by in couples as their bracelets clicked against their arms talking loudly about men. Police cars slid by as silently as manta rays. As Juliette walked she could see signs from other eras that advertised steam baths for 10 cents. She walked along a sidewalk made of glass bricks. She walked past the Salvation Army where men lined up around the corner in hope of a cup of lentil soup and bread. She strolled up across the Jackson Street bridge and across Pill Hill and past Harborview Hospital down to Recreational Equipment Incorporated (R.E.I.) and saw many late-night businessmen cruising past, and some artists. Everywhere there were Beatnik coffee shops where young people read poetry to one another while strobe lights flickered and temporary secretaries finished their cream of turnip soup. Art for them all had become a kind of religion based on the expression of their individuality and their identification with the drift of the times toward pragmatico-romantic solipsism.