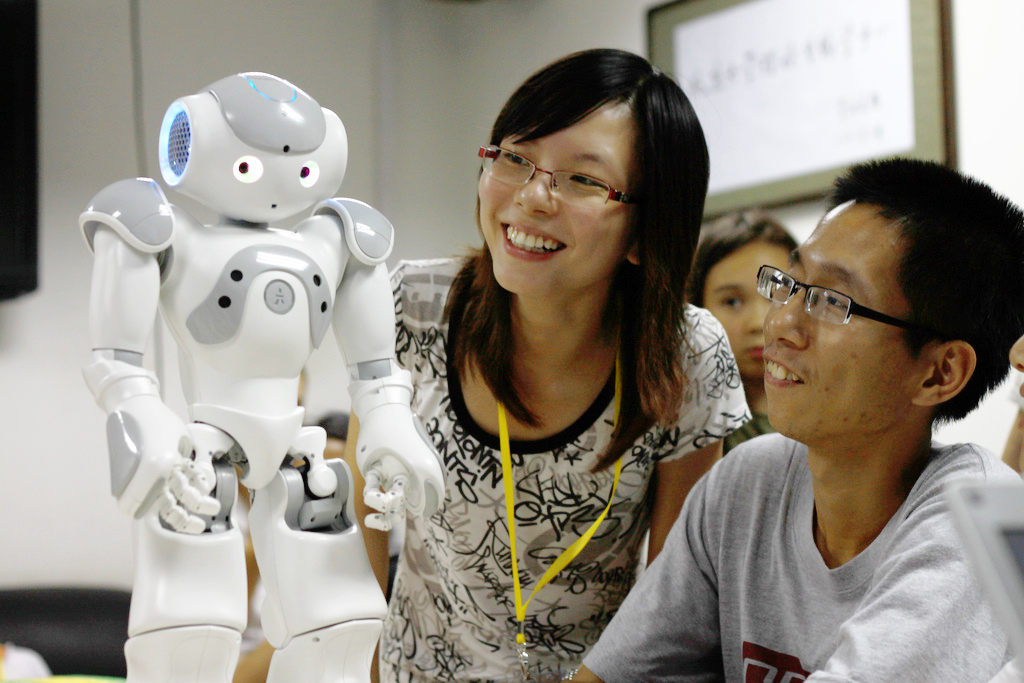 When Dan White first pulled Pepper out of the box, it was slumped over. “I just kind of held him there for a second,” he remembers. “It clearly evoked this sense of needing help and care.”

Pepper is a white, semi-humanoid robot, about the size of a 6-year-old, made by Tokyo-based SoftBank Robotics. You may have seen him working in a bank or a hotel, or being interviewed by Neil deGrasse Tyson. According to the company, Pepper was designed “to be a genuine day-to-day companion whose number one quality is his ability to perceive emotions.” Pepper uses cameras and sensors to detect a person’s facial expression, tone of voice, body movements, and gaze, and the robot reacts to those—it can talk, gesture, and even dance on wheels.

White’s emotional response to Pepper was a surprise, even for him—a researcher at the Freie Universität Berlin who specializes in understanding the combination of emotion and technology. White looks at how machines might read our emotions or elicit emotions, or even, in the near future, “have” emotions of their own. Sometimes this is called emotional artificial intelligence, or just emotional intelligence.

Pepper and other emotional robots are particularly designed, for example, to make eye contact and study how we gaze back at them. “This actually evokes a feeling that the machine even cares about us,” says Hirofumi Katsuno, White’s colleague at Doshisha University in Kyoto, Japan. “The machine tries to understand me or understand us.” Depending on your cultural perspective, being stared at by a machine might seem like an intrusion or it might evoke a sense of comfort, as if someone is kindly watching over you.

The field of robotics is changing at a rapid pace. Computer scientists are working on artificial intelligence (AI) so that machines can better understand and mimic human behavior. On one hand, this is causing a wave of anxiety in society: Will robots take our jobs or alter our lives in ways we don’t like? On the other hand, robots might help us, care for us, and even make us feel more human. Where does this tension come from? And where will it take us?

“The term robot was coined by Karel Čapek and his brother Josef Čapek, a writer and artist in the Czech Republic, in 1920,” says Jennifer Robertson, an anthropologist at the University of Michigan and author of the book Robo Sapiens Japanicus: Robots, Gender, Family, and the Japanese Nation. Karel put the term in a play in Czech called R.U.R. (or Rossum’s Universal Robots), about a company creating human-looking robots designed to release humans from drudge labor. Since the robots sometimes injured themselves in their work, they were given, as a cost-saving measure, emotions to let them sense dangerous situations. But some of these emotions made them aware of their exploitation, and they revolted en masse. The play was translated into English and Japanese, and performed in Japan in 1924.

Throughout the 1920s and ’30s, robots became popular in comic books and other media, including both evil robots that posed a danger to humans and friendly robots that collaborated with humans to help with certain tasks. The tension between good and evil was there from the start.

Today, Japan has one of fastest shrinking workforces on the planet. Its population is aging very rapidly, and they have a lack of nurses. Robots like Pepper could step in to help replace human caregivers in some situations.

But there are other reasons behind the heavy interest in robotics in Japan. When he first served as prime minister from 2006 to 2007, Shinzō Abe started pushing the roboticization of Japan, says Robertson. And when he became prime minister once more, in 2012, he pushed robotics into the spotlight again. “He also decided that the Japanese should no longer shy away from joining the weapons economy,” says Robertson. “It’s a very lucrative application of robotics.” That includes everything from cameras and binoculars used in battlefield situations to exoskeletons and drones. All this makes robotics and its spinoffs a valuable resource for Japan.

So why aren’t there more news stories about deadly robotic soldiers? “Aside from the fact that a lot of this is top secret … entertainment AI just captures our imagination more than killer robots,” says Robertson.

Militarization of robots is one potentially significant consequence of research into seemingly innocuous robots like Pepper.

But robotic intimacy might affect even more critical, everyday aspects of our lives, such as how we express emotion.

Pepper and other robots like him are built on the back of research on human emotion. Psychologists who do work on facial expressions, for example, say there are six basic emotions, maybe seven: joy, sadness, anger, surprise, disgust, and fear (some people add contempt). But these models are built on an assumption that these emotions are universal across cultures, which may not be true. “The universal models have universalizing effects,” says White. “They produce universal models of what people are and what their emotions are because you can only collect data that can fit into the basic categories of what these emotions are.” In other words, they tend to flatten the landscape of human emotional experience.

Robot designers can also pick up on and extend human stereotypes. “So a security robot should look like a big, burly police officer and should have a square shape and have at least some navy blue built into the color scheme, whereas a robot that’s designed to be a companion to an elderly person should be small and cute and a neutral color,” says Robertson.

Behind Pepper’s cute exterior are a lot of complexities related to weapons regimes, surveillance, emotional development, and communication research. In the end, all that might make it challenging for robots to carry out the larger-than-life goals that have been assigned to them, like easing loneliness, enriching the human experience, keeping workers happy, and caring for the elderly.

In the meantime, there’s still debate about exactly what human emotions are, let alone whether robots can replicate them. Can a robot love? “That’s a hugely speculative question,” says Katsuno. But, he adds, we’re at least getting to the point where it feels like a robot loves us.

This work first appeared on SAPIENS under a CC BY-ND 4.0 license. Listen to the companion episode of SAPIENS: A Podcast for Everything Human!