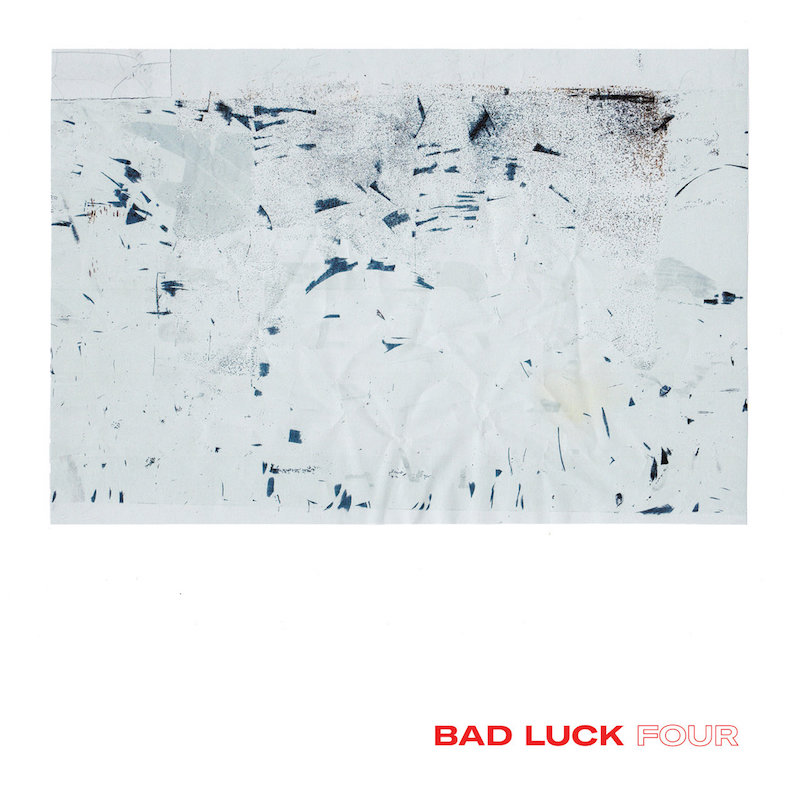 As Bad Luck, Neil Welch (tenor saxophone & live electronics) and Chris Icasiano (drums) have played roughly 60 shows a year for over 10 years. Their latest CD out on Origin Records, Four, displays the mature, complex seamlessness which comes from two players who know what the other is about. Welch’s dexterous chops atop his use of drone and chorus pedals (plus studio work by Randal Dunn) combine with Icasiano’s tom-heavy drumming to produce an exhilarating sonic experience. Welch’s tone moves from gorgeous to scolding to Pharoah Sanders cries. Icasiano can do it all with his drum kit: bombast, light touches, dense unrelenting low patterns, sermons of light and darkness. The six compositions here are sometimes smooth, sometimes angular, sometimes a cross between tight metal and prog rock; at other times they invoke the patient, caressing ethereality of Sigur Rós, with Welch’s soaring tenor playing the role of the untranslatable, invented language.

Welch and Icasiano are and have been fixtures in the Seattle improvised music scene for a decade. In addition to being among the 6 or so founders of the Racer Sessions (Seattle’s free jazz/creative music weekly jam, now nearing its tenth year), they have separately and together performed in 1000s of shows in various settings— from standards gigs to modern creative dance (using accelerometers to manipulate sound) to ragas with master sitar players, to an opera house performance of Roscoe Mitchell’s “Nonaah” (with the master himself in attendance). It is lovely for them to put out such an ambitious and successful record.

Sonically, Four feels like a road-trip through the badlands: driving, zoning out to gorgeous vistas, striated canyons, breathing the occasional sulfur rising from prehistoric ponds, the otherworldliness of endless horizon, at night just the dark, stars, the highway markers, and, now and again, headlights coming full-on. Some of the tunes operate at three levels: Icasiano’s rolling toms create a roiling current; Welch establishes one or two shifting trenches of long notes on his pedal board, and then soars over atop on his gorgeous tenor. Another approach they use is to play in tight, synchronized cell structures, like paired modern dancers working the mat in an esoteric, physical vocabulary. Welch and Icasiano credit Randal Dunn, who recorded, mixed and co- produced the record, as chief sonic sculptor in the studio.

Track 1 (“Four”) encapsulates the whole record: crying sax over energy drum-fills over slow- shifting choral effects. “Four” opens with tom beats, and sax squeals, and then shifting blocks of chorus pedal mark out the tune’s sonic boundaries. Some Pharoah Sanders plaintive cries, some Sigur Rós cloudscapes. Now relax, strip it down to the shifting chordal blocks under ride cymbal sheen; breathe. Very filmic. The CD’s back cover depicts a cold stream through snowy barrens, leading to low bluffs in the distance. This tune could easily be the soundtrack on a frigid, upward trek: wind brisk in your face, heat rising under your jacket, the dizzy you experience when you close your eyes after exertion. There’s some exhilaration and some mystery fear. The sax returns and the drums gets busier. Then a fade-out. It works with headphones.

Track 2, “R.B.G.,” (yes, named for the esteemed Supreme Court Justice) starts with an angry twitch, softens slightly, briefly, and flows into rolling, frenetic toms and multiphonic sax cries. It becomes a study in intensity, and then a break until the next cell starts: a driving into a storm motif, until Welch really lets loose: quick tonguing, crying, lifting us into stratosphere, swept into multi-colored clouds without an airplane. Around 4:30 the backdrop peels away and they launch into something like prog rock, where the sax/drums play patterned hits in unison. They reach a silent precipice, and Icasiano unexpectedly goes into a Caribbean dance beat, over which Welch wails, a menacing held note rising in back. If we are still thinking R.B.G, we have here Justice Ginsburg dancing and ruefully laughing at what fate has thrown at her: so many steps forward, so many steps back. At some point they switch into pure energy mode, continuous fills making for a rhythmic tapestry, Welch in the upper range singing with banshee determination and possession.

Track 3, “Index,” is the shortest cut at 6 and 1/4 minutes. The backgrounding techniques are made the foreground. As mood music, imagine a mouse moving through a labyrinth slowly losing the certainty of its location. It opens with brushes on snare and that undergrowth of shifting sound blocks. Enter some softly held sax dissonant harmonics, woven with their electrified echoes and modulations. It is a gentle piece, with just enough edge to keep the experience real. Track 4, “Capital,” opens with some rising toms that turn into rapid, spasmodic sax notes in unison with rim-shots, snare, and cymbal hits. Again the anxiety of losing one’s way in a maze, anxious to find the thread of escape. When the electronics and the pacing tambourine kick in (at 3:35), something soothing happens in the multiphonics which take us to safety. The timbre of the sax really comes through on this piece.

Track 5, “Bends,” grows into what is perhaps the most terrifying song in the collection: intense wails and drumming that is a drubbing, patiently upping the ante over a long-form electronic, undulating drone background. Around ten minutes in, a myriad of bells enter as the intensity loosens, and we are held aloft in an elegant sound garden of resonant objects. Track 6 (“Big Sky”) opens calmly, with large gestures, timpani, and cymbal swells. It shifts to a kind of rocking, thumping, and foregrounds some modulated sax notes, some buried electronic blips and bleeps. Then begins the low thunder out a-ways yonder in them dark clouds. Icasiano’s seething tom rolls and cymbal swells produce an atmosphere of foreboding, Welch provides the sheet lightning behind the storm, and the whole leads upward to an extended drum roll (à la Godspeed You! Black Emperor), and then Welch’s tenor reaches for the human sublime.

Bad Luck treads its own path. If last century, Coltrane and Ali’s Interstellar Space (recorded in 1967) set the table for the sax/drums duo, Bad Luck leaves behind the question of handing off the torch, and draws instead on so many other traditions all at once. This music is not jazz, it is not rock or metal, it is not ambient, it is not techno. Its admixture of electronic and acoustic elements, its cinematic, creative use of time and song form amounts to a neo-expressionism for the new century.

Bad Luck’s 2018 autumn West-coast tour takes them South through Washington, Oregon and California. For information, go to the Bands in Town website.