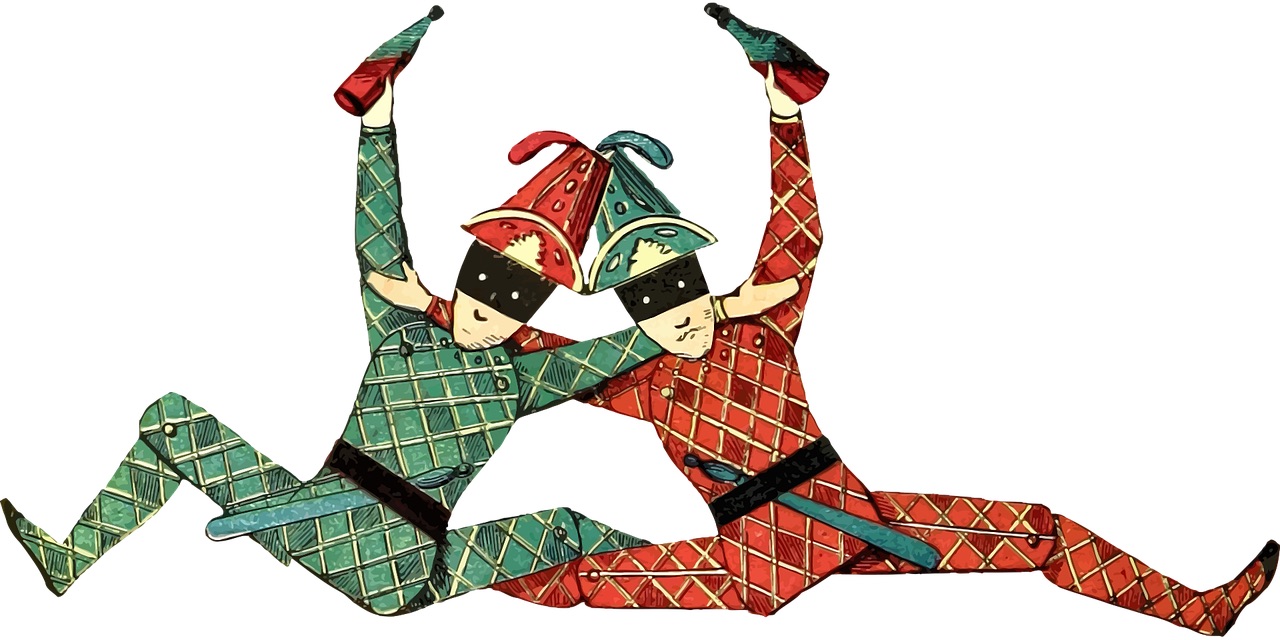 From time immemorial man and womankind have struggled to understand the significance of the role of the Fool in every culture. It’s an archetypal figure so prevalent in the tales of history and fiction that it has been honored with it’s own card in the traditional tarot deck. From Shakespeare and Chaucer to Monty Python’s “Silly Party”, the character has represented both folly and wisdom.

The question on everyone lips throughout history has been this:

“Is he/she mad or simply brilliant?”

And what if the emperor himself is a fool who wears no clothes? Ooops!

This query has led many authors, playwrights, philosophers and politicians on delirious witch hunts and inquisitions in search of an answer to this perplexing question.

Well, I doubt that this humble author has either the special insight or the eloquence necessary to set the record straight, but I can offer this brief history of where the “April Fool’s Day” tradition came from. It’s the very least I can do… (And please never let it be said that I have not done the very least I can do!)

So here’s the story…

First of all, there are many different theories associated with the origin of April Fool’s Day. In A.D. 1,234 the English chronicler Geoffery of Wendendale wrote:

Roughly translated, this means that foolish people often make unwise bets at the race track during the first week of April, so don’t be fooled into accepting a wooden nickel…

Several Anglo-Saxon historians have suggested that the chronicler is referring to the lusty days (daze?) of Spring when many young men and women suddenly become obsessed with certain romantic notions, or at least with the bodily functions associated with those notions…

After all, when poetry, wine and song are thus involved, can one blame folks for being a little distracted, and perhaps foolish? Ah, the goddess Aphrodite rules with blissful insanity when the ice and snow thaws and the flowers begin to bloom! So is it any wonder that for ages bards and troubadours have celebrated the fact that many of us become absolute blooming idiots during this time of year?

The French author Louis le Fou of Trou Dans Lemur claimed in his Sixteenth Century biography that he had a brief acquaintance with a dame du soir (lady of the evening) who told him she had once read a letter addressed to a man in Berlin whom she knew intimately… The correspondence was apparently from his wife in Bombay, India. The wife had a brief affair with a Greek priest who told her that April Fool’s Day was actually a commemoration of an old myth originating from ancient Athens.

According to the clergyman, Zeus became so tired of listening to the petty arguments of his fellow gods and goddesses over which immortal was the most beautiful, or just or powerful, that he proclaimed a day of complete idiocy where he struck all of the members of the pantheon with lightning bolts. It was pleasing to Zeus because these strikes left the other gods completely speechless and ignorant of their own powers for one day a year, so The Grand Poobah could rest up for once and contemplate his creations.

I, however, will hang my hat upon this explanation for April Fool’s Day which was generously proffered to me by my Indonesian friend who was born with her identical twin in Iceland and New Caledonia but who now lives in Dar es Salaam, Tanzania when she’s not hiding from paparazzi in West Hollywood. She is a highly qualified authority on this subject, having been a longtime expatriate, non-matriculating professor emeritus of comedy at Bowling Green University.

Professor Peekaboo Dharma maintains that April Fool’s Day is an Illuminati device designed to misdirect the masses during secret negotiations over world domination between a few highly placed wealthy families. Her academic research at Plethora College has led her to the conclusion that the Trojan War, Hannibal’s’ failure to capture Rome, The French Revolution, the Boxer Rebellion, War of 1812 and both World Wars were caused by official reactions to various fake news reports and messages delivered on April Fool’s Day by operatives of these deep, dark, secret societies.

Examples: “The Trojan Horse Is Empty!”, “The Americans Plan To Tear Down The Great Wall of China!”, “Peace In Our Time!”, etc.

When I asked Dr. Dharma where the evidence was for such a conclusion, she replied that it was secured in a labyrinth inside of a puzzle underneath a maze in an underground bunker at an undisclosed location…

I mean, hey, that sounded good to me so I’ll just take her word for it like any good journalist!

Anyway, we may never know for sure if Dr. Dharma’s theory is correct, but rest assured that further chaos and conflict are inevitable on April Fool’s Day every year.

Whether it’s a snarky joke perpetrated by denizens of the underworld or a rip-roaring good time invented by merry pranksters, I will let you decide for yourself. Either way, you’d best be on guard for tricksters and impractical jokes.

All I can say is, good luck!