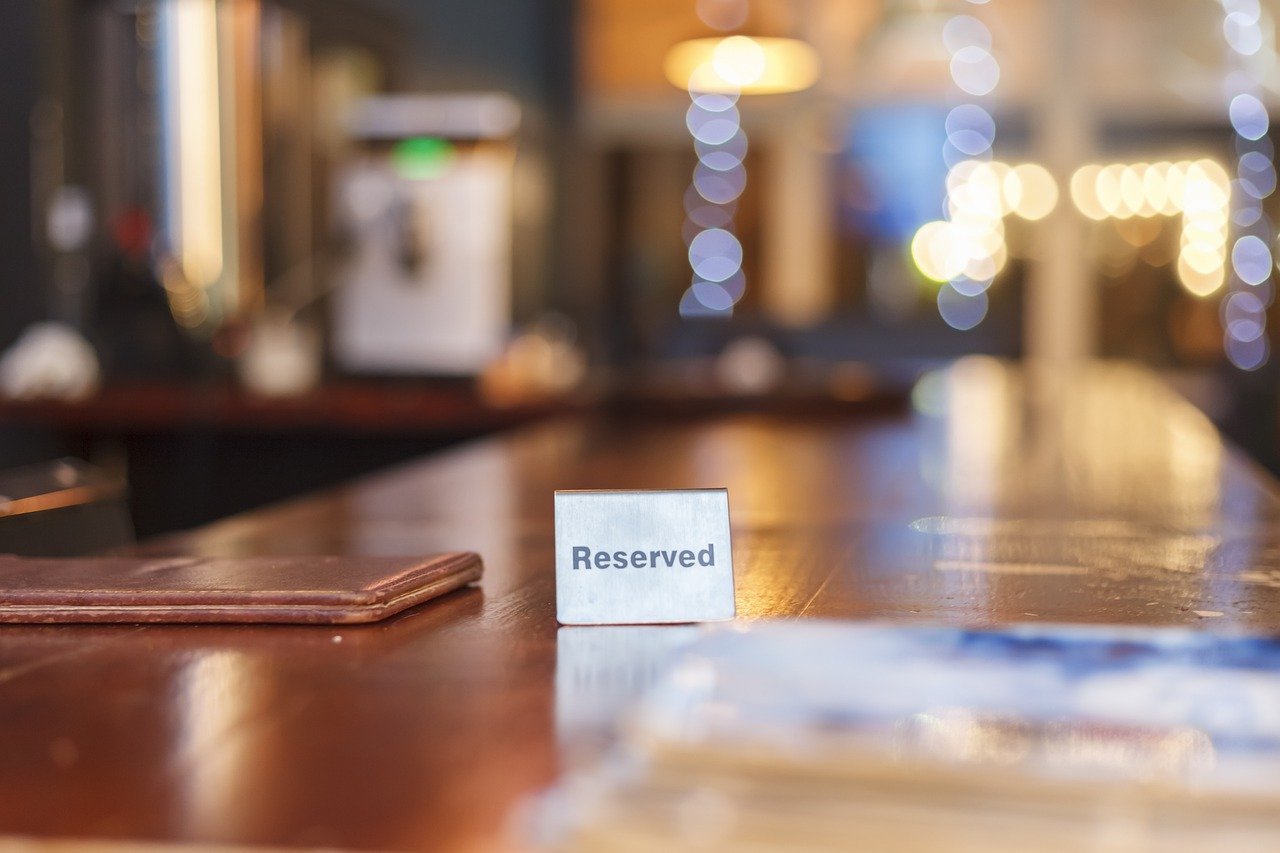 The invitation lay at the center of my cubicle desk when I arrived early that Friday morning. My name was hand-calligraphed onto the front of the envelope. Before I opened it, I looked around at all the other cubicles I could see from my own, and then at a few more I couldn’t, on tiptoes. None of them had invitations on them. Here’s what it said inside.

At the very bottom, without a P.S., were an additional two words and an exclamation point: Please come!

I wasn’t going. I never went to these things. They were always so stressful for me. I didn’t mind being relegated to my rightful place at the loser’s table, but I hated the forced conversations, and the words that came out of my mouth under such pressure. I slipped the invitation into a desk drawer and thought about it for only a short while, and only in the context of why I had even been invited.

Natalie had been “let go” from the company the day before. Like the rest of the unfortunates, she was told of her fate in a private meeting around 10am, given 15 minutes to pack her personal belongings, and then marched out the front door by an HR representative.

I hardly knew her. Our only contact had been in meetings, most of which I didn’t talk in, but I’m sure there must have been a few in which I’d been forced to give an update or answer a question. I don’t remember ever having talked to her directly. And I’m sure I would have.

I’d say she was around 40 then, and still very beautiful. Statuesque. Tall with wide hips, and everything else perfectly proportioned in relation to them. And as is almost always the case, she had a face to match. Any age that had set into it was perfectly offset by the kindness with which she wielded her beauty. She had the wardrobe of a confident businesswoman with a perfect body. Tastefully alluring.

So why had she invited me to this dinner? I had no idea. The best I could come up with was a gesture of pity, which didn’t motivate me to reconsider. I pictured me at the table among the other people she had probably invited: all confident, talkative, marketing types. From every angle, it spelled pain. I put it out of my mind so completely that on the day of the dinner I wasn’t aware that it would happen that night.

But I was definitely aware of it early the next morning. I was toiling away in my cube when I overheard the conversation of two women walking in my general direction. One of them said, “What??? A million dollars?”. The other said, “Actually more. They think that after taxes it will be a million dollars.”

Nothing had clicked yet, but then the first one asked, “How many people did she invite? Anyone else I know?”

I stood up in my cubicle. I never stand up in my cubicle. They turned and looked at me. “Did you hear? Natalie invited a bunch of people to dinner last night, and gave them all a million dollars!” I tried not to look too pained. I said, “Wow,” without an exclamation point, and sat back down. I don’t think I moved at all for a solid minute, except for some involuntary darting of my eyes. Then I robotically moved my invitation from the desk drawer into my backpack, which I then zipped shut, and pulled up onto my desk for safe keeping. Missing an easy opportunity at a million dollars was one thing, but having everyone know it was quite another.

I would learn the details of the dinner later. It made the news. And people talked about it nonstop for a while. At the start of the dinner, Natalie had thanked everyone for coming, and announced that she would be footing the bill. After that, it was just your normal oh-it-was-so-great-to-have-worked-with-you-let’s -keep-in-touch dinner until the very end when Natalie left the table to pay the bill. She never returned. In her place came the maitre d, who had another hand-calligraphed envelope for each person at the table. In each envelope was a check for 1.73 million dollars. People took it differently. Some took it as a joke, and some nearly fainted. But no one could truly believe Natalie had that kind of money. And was just giving it away.

When I say Natalie never returned, I really mean she disappeared completely. Reporters tried to track her down and couldn’t. But the checks didn’t bounce. Eight people became millionaires that Friday morning.

Four people didn’t. One of them had responded to the invitation the day she got it and apologized profusely for not being able to make it. She insisted that she and Natalie meet some other time to say their good-byes. She got her million-dollar envelope in the mail 2 days after the dinner. But I didn’t. I never got one. I don’t know about the other two people. Maybe they got theirs in the mail, too, but preferred to keep it quiet? Or maybe they didn’t. I don’t know. Either way, they both left the company shortly after, as did the 9 millionaires. Only I stayed.

I saw pictures of some of the other invitations. They were all the same as mine, but none of those I saw had “Please come!” at the bottom.

Everyone knew that there had been 12 guest places set at the table that night — with 4 of them empty — but only 11 of the invitees were known. A rumor started up that the twelfth apostle was me. Someone said they had noticed the envelopes early that Friday morning and walked around to see who all had gotten them, and I was among those who had. At first people laughed at the rumor — why would the beautiful Natalie invite an irrelevant schlub like me — but then somebody asked me straight up and I was too simple to lie.

I became a local tourist attraction. We occupied six floors in the building so there were plenty of people who didn’t Know who I was. They would stop at the end of my row of cubes, whisper and point with their eyebrows and chins. Some would even say things right out loud, like “DuuuuuuuuuUUUUUUUde.” I started wearing headphones.

I stayed on with the company for many years afterward and the notoriety never fully subsided. I would later learn that the DuuuuuuuuuuuUUUUUdes had a nickname for me when one of their newer members used it to my face: After Taxes.

I consider myself pretty accomplished at dealing with life’s gut punches. Slights, embarrassments, regrets, rejections. I know they all fade and lose their power over time. But this one I couldn’t shake. As the first anniversary of the dinner came into view, I put a plan into motion.

I sent off a hand-calligraphed invitation to Natalie at her mother’s address, inviting her to dinner with me at the same restaurant on the same night at the same time. I sent it a month early. I didn’t know if she would come, but I wanted to give her some time in case she needed it. And, of course, at the bottom of the invitation I wrote, “Please come!”

It would be too embarrassing to explain in detail how I spent that month learning how to comport myself inside a nice restaurant, but I did hound my mother with endless questions, and there were a couple trial runs.

On the night of the dinner, I arrived 15 minutes early and was seated facing the door. Natalie arrived exactly on time, spotted me quickly and carried a gorgeous happy smile across the floor to my table. I hate to say that I had “a wonderful time” that night, but that’s exactly what it was to be in the presence of someone so beautiful, so confident, and with a genuine interest in me.

As if preordained, our conversation the entire meal was confined to events that had occurred before the million dollar night.

After we had finished dessert, I motioned to the waiter for the bill. As he was walking away with my credit card, Natalie graciously, and silently, pulled my hand-calligraphed million-dollar envelope from her purse, placed it on the table and slid it across to my side, so that I could silently slide it back to her side, and she could silently place it back in her purse.

We waited in silence until the waiter returned. I signed, he left, and then Natalie’s eyes met mine. “Shall we?” she smiled.

Outside on the sidewalk in front of the restaurant, Natalie put her hands out in front of me, palms up, and motioned for me to put my hands in hers. I did. Then she looked into my face with a mix of warmth and beauty people like me never get to experience, and she said, “Mark, what you’ve got is worth more than all the money I could ever give you.” I didn’t laugh. I didn’t cry. But I also didn’t speak. After a few seconds, her eyes dropped and she sighed. Then her eyes came back and she said brightly, “One day you’ll understand.”

Unfortunately, that day has yet to arrive. We said our goodbyes, and I watched her walk away. I never heard from her again.

But I didn’t come away from the ordeal entirely empty-handed. Words burn brighter for me now.