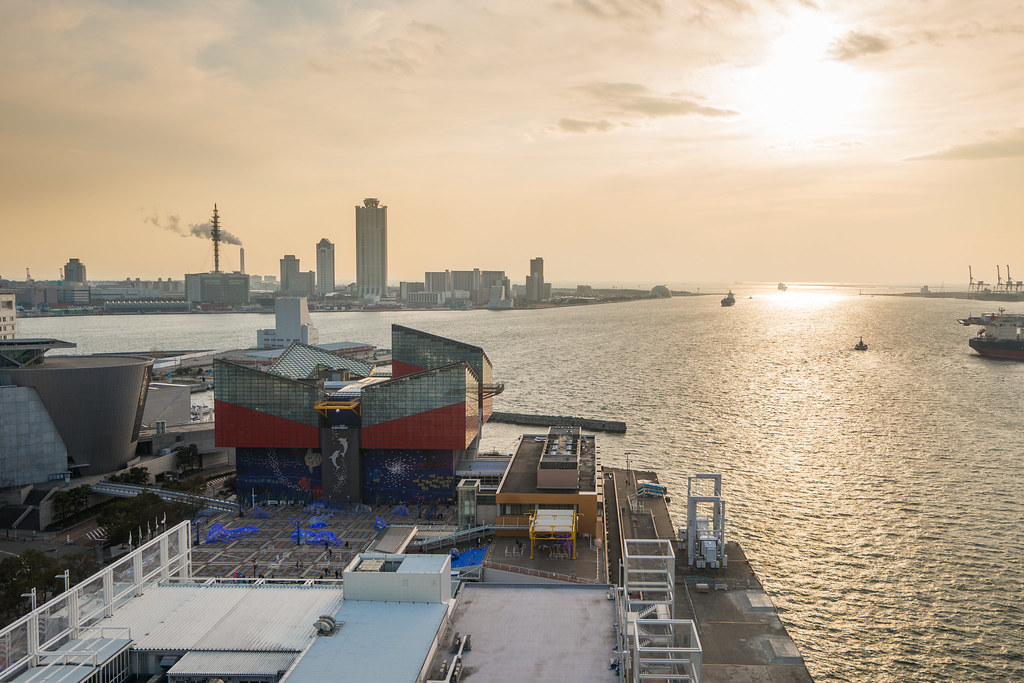 Checking into the Seoul airport, I was given a free phone card by Korean Air good for ten minutes. I wanted to call Anne from there, but it was only good in Japan. Johannes was on the same flight as I. He had booked my film shows in Korea and Japan. He told me we would have a few hours in Osaka, and then take the night ferry to Beppu. Johannes told me “On the night boat you will be given a blanket and pad to bed down in a big room with many others. I pictured an old boat with a sleeping room akin to the mission flophouse in Sullivan’s Travels. It turned out, I was only slightly wrong.

Arriving at Osaka, we took a bus into town. We then went to the apartment of Kunihiko Tomioka. He ran the PLANET Studyo + 1 Cinema, where I would show films when we came back from Beppu. He was a gracious host, and very welcoming. He told me that there was an English language newspaper in Japan called the Japan Times. That made me happy, because I couldn’t find the International Herald in the Osaka airport book store. He said he was excited to see the films I had with me. I had one 16mm Feature with me, Dirty Mary Crazy Larry, which would only play in Osaka. I left that with Tomioka. We left his place at six to go to the night boat. To get there, we took the subway.

We left the subway and walked down a long causeway. Below I saw dozens of buses and trucks parked. I pointed them out to Johannes. He said many buses and semi-trucks would load onto the boat. My picture then changed: instead of a wooden scow, I now expected a great big ferry, like the ones trains would load on in Denmark. We went into an office where we were assigned sleeping spots. Well, that sounded better than the flophouse in Sullivan’s Travels. There Joel McCrae and Veronica Lake, fully clothed, slept in a big room, on the floor, with a hundred others, cheek by jowl. Having an assigned spot sounded better.

We boarded the boat, which seemed more like a Carnival Cruise Line boat, than a Denmark ferry. Inside we went out looking for our sleeping spots. They were in a room about twice as big as a basketball court, with the floor divided into four rows of sleeping spots. Each sleeping spot was a little bigger than a coffin, with a carpeted floor. All were at a right angle to the side walls. At the head was a short bookcase, big enough to hang up a jacket on hooks, with a shelf for a suitcase over it. Down the middle of the room was a double short wall made up of the bookcases, with sleeping spots on each side. My spot was in the middle row, about a third down. On the suitcase shelf was a cotton blanket, a rolled mat, and a pillow. The pillow was a hard square, covered in green naugahyde, about the size of a brick. It looked like an enlarged armrest from a chrome chair in an old Greyhound lounge, but less soft.

We stored out bags and went out into the passage. We found a large cafeteria style restaurant. It had windows to look out at the sea. Faux rattan chairs, made of plastic, were lined up facing the windows. There was also a grocery store, and machines to buy juice, sodas, hot coffee and beer. There was a big virtual fish tank. Colorful televised fish swan around within. Johannes bought some beers. I bought a couple for myself. We made our way aft and onto the deck. It was still hot, but cooler than on the mainland. We found a bench were we could smoke and drink beer. We were soon underway. Near were a group of five high school boys on a bench. Each one would get up and imitate a man bowling, while the others would watch. After a few rounds, they changed to baseball. Standing fifteen feet apart, one would be the batter, and one the pitcher. The pitcher would mimic a throw, and the batter would swing. The other three played first base, shortstop, and center field. They would then imitate a play. Sometimes it was a ground ball to short, or a fly to center, or a popup on the infield. One pitcher used the corkscrew motion of Hideo Nomo. One batter used the tippy-toe stance of Edgar Martinez, or it might have been one used by a Hanshin Tiger. One of the batters was left handed, using the exact stance of Ichiro. The fielders would decide the outcome of each hit. There was no arguing. They played the game for at least an hour.

Johannes said he was hungry, but after a couple of beers he forgot about that. He’d also had a Budweiser on the plane, and three pints at Tomioka’s. I didn’t have to count them. After five beers Johannes was more talkative. He asked me for the English word for wind created by moving through still air at a good speed. I told him I didn’t think there was one in English. He said there was specific word for it in German. We talked about drafting with a motorcycle behind a semi, or in stock car races. He talked about books that Ilka in Nuremberg had discovered and then gave away to friends. One was The Trip to Petushky written by a drunken Russian in 1968. It sounded interesting.

The five boys finally finished the baseball game and sat down. Then they started singing, in harmony. They did not sing loud, but sweetly, with strong voices. The wind created by the moving boat carried their song away. I couldn’t make out words, but it was nice to hear. I looked for the moon. I didn’t find it. It was cloudy, with no stars at all. There were lights on shore. On the approach to Kobe, a bridge appeared on the right. It was completely outlined in orange lights. There was also a ferris wheel, lit in psychedelic colors. Ahead, in blue lights, was an Aztec pyramid. We turned toward it and docked. Ahead of us was the Oriental Hotel. The rows of rooms facing the water all had balconies. It looked cool. I had noticed in the reflection in the water that out boat was lit up also. We got up to leave. The boys were still singing.

Below deck we found the café was closed. I told Johannes that I was going to bed. He went back on deck. It was little before eleven. In the big room, most of the sleeping places were occupied. To the right of me was a young mother with three small kids. To the left was an old Japanese man. The lights were still on. I wondered if they were lit all night? I imagined that even though it was coed, the authorities were not in favor of hanky panky. I would also think they would make sure there was no unwelcome groping. I read some Mark Twain (Roughing It). I fell asleep with the lights on. Occasionally in the night a small child would crawl onto me.

When I awoke, it was five thirty in the morning. The lights were on. Johannes was still asleep.  I went on deck and found it deserted.  I sat on a bench and watched the shore go by.  It was nice that it was not hot.  I had no idea when we would arrive in Beppu, or when Johannes would get up, or when the café would open. I decided to sit tight until Johannes showed up.  He appeared about the time we were nearing the dock.  We went back to the sleeping room and got our stuff.