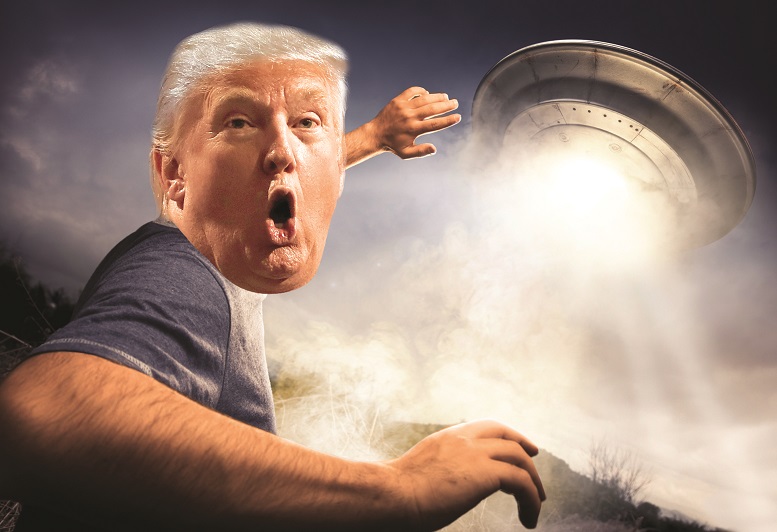 Today a spokesperson for the galactic federation’s Interior Ministry of Information admitted that the entire Trump administration was a hoax perpetrated and directed by teenagers from an alien race of creatures inhabiting the planet Nebulous.

The prank was first proposed in November of 2014 after the adolescent aliens got amazingly high on Super Lemon Haze they obtained from a local Seattle pot shop called “Baked In Paradise.”

Apparently the idea came to them when one of the creatures (who look a lot like slugs) suggested that they use advanced mind control techniques to convince half the country that Trump was their messiah chosen by God to transform the nation into a right-wing neo-fascist Christian theocracy. It was all a funny joke until the guy actually got elected!

For most of his insane reign the guilty aliens tried to hide their involvement until an investigative reporter from the Alpha Centauri system went undercover to reveal the truth. After an extensive four year investigation, journalist Zyfloid Wuvenackianoginofidz finally cracked the case wide open in an expose for a major Centuarian news network. Zyfloid revealed that some very high level members of the US Congress were also brainwashed by the Nebulean pranksters.

According to my anonymous sources residing at an unknown secret unspecified location somewhere near a black hole, Donald Trump had no idea that much of the nation was being manipulated by forces from the other side of the Milky Way Galaxy. To hide their complicity, the aliens spread rumors that it was actually a conspiracy by the Russians to undermine American democracy.  Unfortunately, Nancy Pelosi and Chuck Schumer still believe that false propaganda, but Vladimir Putin doesn’t seem to mind taking credit for a major political disaster that nearly toppled the US empire.

The United Nations has filed an official complaint against the Nebuleans with the galactic federation but few observers think anyone will ultimately be held responsible.

In the words of one of the alien conspirators, “If the human species is so stupid that they will believe an obvious hoax, then they deserve everything they got.”

Trump and his minions were unavailable for comment but the twice impeachedformer commander in chief tweeted another irrational rant about “radical leftist Democrat mayors” being responsible for the destruction of “America’s greatness.”

In other news, NASA astronomers say they will renew their attempts to send Trump back to a desolate isolated asteroid after he escaped last week with the help of Alex Jones and a band of outlaw authoritarians from the planet Draconia.