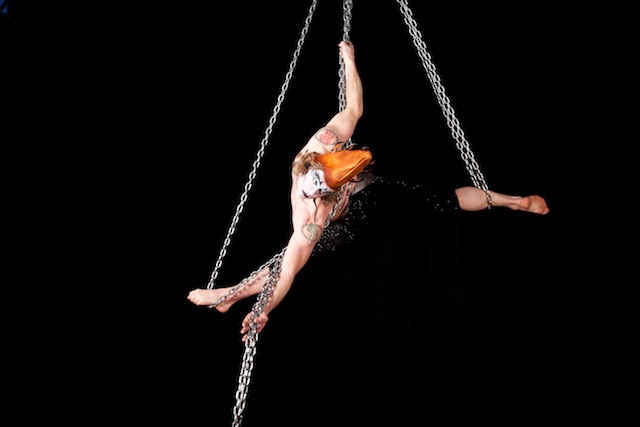 [/media-credit]I thought people knew better but in the last couple months I’ve had some conversations that positively shocked me. It seems there are still people who believe that art just magically happens: that it’s easy if only you have “talent,” that it isn’t actually hard work, that it isn’t a “real job.” Crudely summarized, these people believe that art consists largely of screwing around.

Those discussions became the seeds for this new monthly series at the Seattle Star entitled The Working Artist. The intent is to follow around an artist or group of artists each month, discussing their creative process. But beyond that it also discusses the daily routines and sacrifices they endure so that they can actually make art in contemporary society: a look into their day jobs, so to speak, and how they balance creativity and artwork with the often considerably less rewarding work that pays bills and spreads their reputation in other directions.

This feature series is dedicated to promoting an understanding of art and artistic creation as a primarily dirty, sordid, difficult affair of sweat and blood and sacrifice rather than the currently glamorous notion of inspiration and art exploding full-born from the head of Zeus by sheer genius. It does not attempt to demystify the creative process–I suspect that’s been done enough already–but rather to appreciate the process from the roots up. Art is hard work; only the ignorant and the foolish think otherwise.

Much of the charge that art is an activity for dilettantes stems from its lack of apparent physical labor. Though there is a degree of physical effort involved, it would be easy to believe that old saw “anyone can act,” for instance. It would be equally easy to state that painters, writers, musicians don’t do anything–after all, anyone can write, anyone can slop paint on a canvas, anyone can bang the keys on a piano with her head. How often, after all, has one heard the snide tones of “I could do that!” about modern art or fiction or music?

By contrast no one but a fool or an ironist will ever say that circus arts and acrobatics are physically easy. Such work is a pure expression of the physical agility, strength, power and grace of the human body. Those who think it is easy to hang from a trapeze can try it and see how very difficult it is, and one can always collect their bodies later for burial.

That was my rationale behind choosing The Cabiri to be the first group for our Working Artist spotlight. For twelve years Artistic Director John Murphy and his company have labored in an underappreciated craft, making beautiful work that is both spiritually and emotionally effective, and bringing the magical and the spectacular back into everyday life.

“There was magic in the ancient world,” says Mr. Murphy, “We have lost that. The Cabiri are here to bring that magic back into the world. We want you to walk out of our shows and look up into the clouds and see the images of the numina up there. We want you to hear the voices in the breeze. We want you to stretch your imagination as ancient man did and to see the world behind the world, and to listen to its record.”

Naming his group after the Samothracian deities, the Kaberoi, Mr. Murphy assembled what he calls “the theatrical emissaries of the Annunaki Project,” an arts education organization that preserves and presents stories based on the mythologies of ancient cultures in 1999. “We seek to revive stories that have become obscure with the passage of time,” he says.

Their latest production, Tarhun: Legend of the Lightning God draws from a very obscure story indeed: namely, the Hittite myth of The Storm God and the Serpent–appropriately, a tale the Hittites invoked every spring to celebrate the rebirth of the earth. Still, given the fragmentary nature of all human knowledge about Hittite religion and language, it is a difficult task. Only the truly dedicated would undertake it at all.

The Cabiri are nothing if not dedicated. As I am, they are dedicated to a redefinition of theater not just to promote the aerial arts or cirque noir but to find the ritual and mystery at the heart of all performance.

“These stories in Tarhun go back before the Athenian mysteries or the Eleusinian mysteries. People who trace theater back to the Greeks don’t trace far enough. That’s our area. I don’t consider us revisionists, but more like…what’s the word? Revivalists. Dance revivalists.”
[media-credit name=”John Cornicello” align=”alignleft” width=”333″]

[/media-credit]
An apt phrase. Revival is necessary. Somewhere along the factory line of specialization, the simple magic of performing and being part of a performance has become not the province of priestesses and initiates any longer but the rather remote and often rather dull career of MFA candidates. Even something as fundamental to the ancients as catharsis has, as a cultural phenomenon, become trivial and closer in feeling to voyeurism than to any connection of souls and beliefs.

One of the goals of The Cabiri is to restore this sense of catharsis, not as an emotional purge as Augusto Boal would put it, but rather as a reunification of the individual with the wisdom of the collective unconscious. “Most if not all of the myths told prior to the common era integrate the human species with the world around them,” says Mr. Murphy. “They place the human soul in the world rather than create a universe for the benefit of the human ego. We feel stories which create a world greater than the self make the self change its worldview in such a way that individuals will contemplate their relation to others and consider the ramifications of their individual actions more holistically.”

On one level, The Cabiri approach this goal by restoring spectacle to performance. In Tarhun: Legend of the Lightning God, The Cabiri’s combination of dance and aerial arts have merged with the primeval myth in a most spectacular way. The tale of Tarhun and the dragon Illuyankas is the centerpiece of the first act. Even without any knowledge of Hittites, Hurrians, Akkadians or Canaanites, one can recognize this story from its myriad variations throughout history from the Book of Isaiah to the Greek tale of the Hydra down through St. George and the Dragon and the Fengshen Bang of China. In Tarhun, the dragon myth combines with other Hittite tales culled largely from the work of Harry Hoffner’s Hittite Myths, including tales of how the goddess Hannahannah’s bee cured the world of drought by finding honey and Tarhun’s final battle with Ullikummi the living mountain.

There is throughout the entire work a naive, childlike appreciation of magic and the magic of imagination: it is a fine display of the primordial power of telling and listening to a story. That it is also spectacularly beautiful increases its power. Even the most cynical adult can witness the pure physical beauty of the story in its telling. Beneath it all, supporting the graceful narrative and awe-inspiring technique required to narrate it is a deep belief in art and story as a guide to life itself. “We continuously stress that to forget history is to risk repeating the mistakes of the past,” Mr. Murphy notes. “Myth is the wisdom of the past. To forget myth is to lose the wisdom of the ancients. Knowing these stories gives the audience access to 10,000+ years of cultural wisdom.”

Make no mistake: this is a group of serious artists. The Cabiri unite teamwork, effort, sweat, and concentration to pursue their art and hone it to its finest. And they have patience. Lots of patience. That the group are not regularly celebrated by Seattle’s performing arts pundits, much less by Seattleites at large, strikes me as a miscarriage of justice. With their emphasis on the humanly divine and divinely human, spanning all epochs as well as creating shows for all ages of people, The Cabiri deserve a much larger and much more faithful following.

(Part 2 of our spotlight on The Cabiri continues next week)